One of the Virgin Islands’ flagship resorts is still rebuilding five years after Hurricane Irma, but the owners have been tightlipped about its progress. Although Peter Island Resort and Spa …

END_OF_DOCUMENT_TOKEN_TO_BE_REPLACED 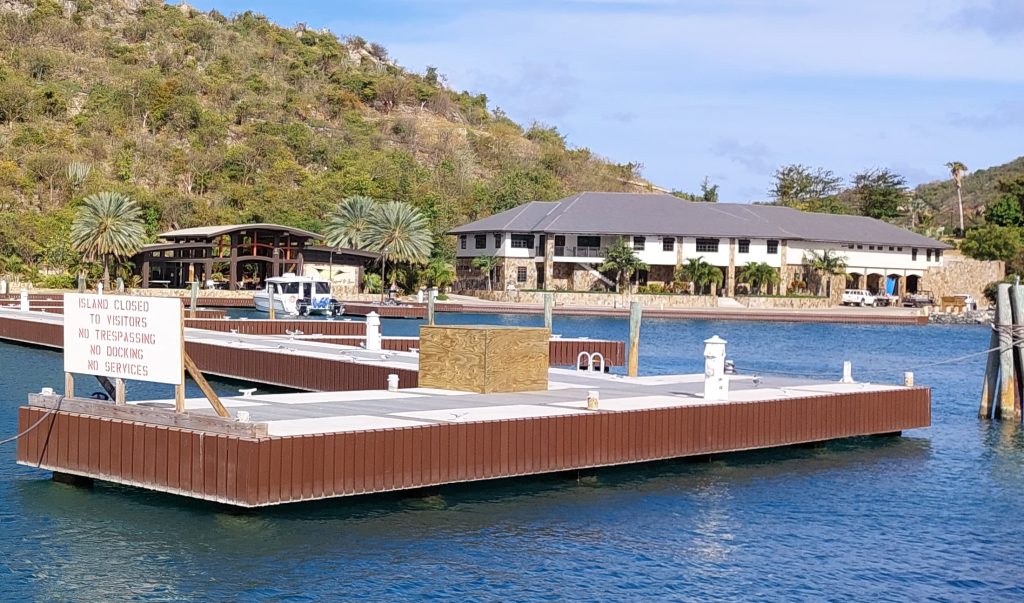 Work at Peter Island is under way, but the resort (shown above in April) remains closed to visitors. (Photo: FREEMAN ROGERS)

One of the Virgin Islands’ flagship resorts is still rebuilding five years after Hurricane Irma, but the owners have been tightlipped about its progress.

Although Peter Island Resort and Spa — the largest private island in the territory, according to its website — had announced that it would partially reopen by December 2021, the deadline was missed and it has not sent any updates to the Beacon after multiple requests.

As of Tuesday, the resort’s website had a message posted on its front page: “The team at Peter Island Resort and Spa would like to thank you for your continued interest and support over the past several years since we had to suspend operations due to the hurricanes. We remain committed to reopening this treasured British Virgin Island [sic] resort, and throughout 2022, will provide progress updates.”

After a long silence following Hurricane Irma, Peter Island announced in January 2020 that it aimed to reopen the “main sections” of its 52 hotel rooms and three villas by the end of that year. At the time of the announcement, then-Premier Andrew Fahie signed an agreement for the redevelopment with Peter Island Limited, represented by resort director David Van Andel, according to a government press release.

The release provided few details, and it didn’t explain why the agreement was needed for the rebuild.

However, Mr. Fahie said at the time that the project would generate approximately 160 local jobs during the construction phase and that after completion it would create “no less than 50 jobs” and contribute $18-$22 million to the economy annually.

However, this reporter received no responses after multiple follow-up attempts. Other attempts to contact management were also unsuccessful.

Since 2001, the resort has been owned by the Van Andel family, co-owners of the Amway multilevel marketing company, according to multiple news reports.

After suffering extensive damage from hurricanes Irma and Maria in 2017, the resort closed and laid off 176 employees, the resort’s human resources department announced in December 2017. Only 35 remained.

Until January 2020, the resort had not announced a timeline for reopening beyond stating that it would remain closed for the duration of 2017 and into late 2018.

The resort has made some rebuilding progress since then, with sporadic blog posts and website updates since 2017, but few, if any, images depict the resort itself. Most of the updates indicate that the resort plans to reopen, but don’t provide details on the progress or tentative dates.

Over the past few years, some posts and videos have featured staff member Jean Kelly, who works in the staff cafeteria feeding workers.

“She sends her love to all our loyal Peter Island guests,” a June 22 post stated. “She cannot wait to give everyone ‘Mama Jean hugs’ when the resort reopens.”

Later in the post, the Peter Island social media account wrote in a comment: “Thank you all for the kind comments. We are eager to share more on our social channels at a later date.”