An online petition to halt the return of captive dolphins to the Virgin Islands has amassed more than 4,000 signatures, with supporters calling the practice “inhumane” and “cruel.” Tortola resident …

END_OF_DOCUMENT_TOKEN_TO_BE_REPLACED 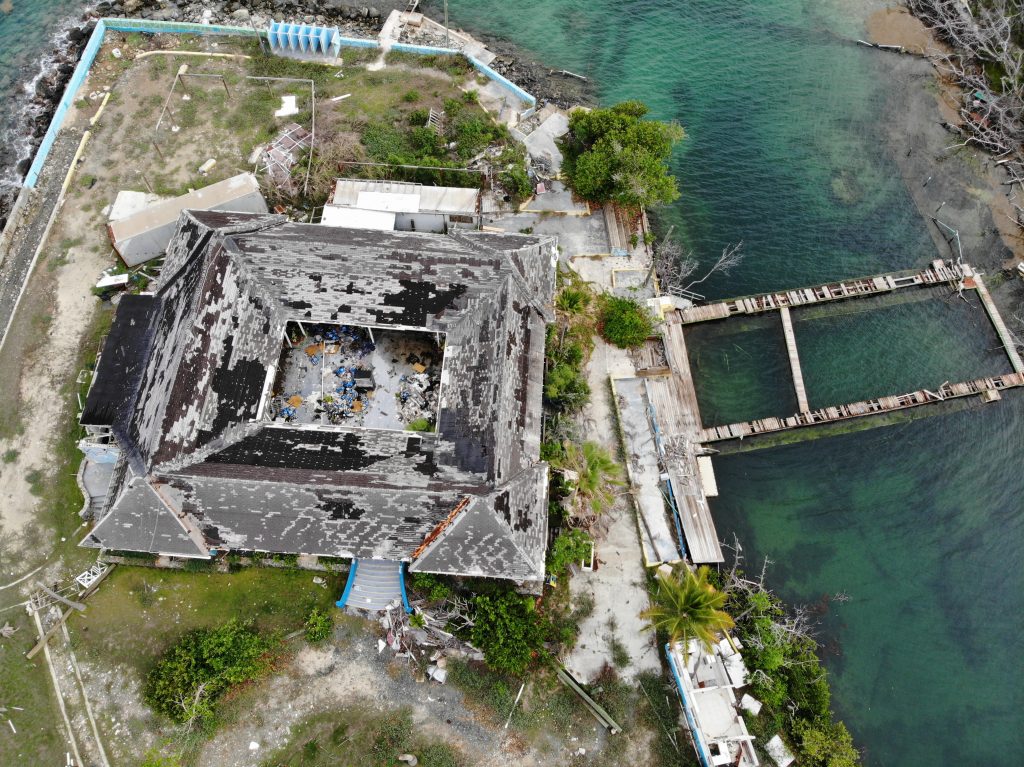 Dolphin Discovery, shown above in June, was destroyed by Hurricane Irma, but Premier Andrew Fahie recently announced plans to reopen it next year. (Photo: FREEMAN ROGERS)

An online petition to halt the return of captive dolphins to the Virgin Islands has amassed more than 4,000 signatures, with supporters calling the practice “inhumane” and “cruel.”

Tortola resident Neil Day created the petition in response to Premier Andrew Fahie’s recent announcement that the government is in talks with Dolphin Discovery to return to the territory.

The premier said a new agreement is likely to be signed within months and government plans to work “feverishly” with the company to have the Prospect Reef park up and running next year. He added that the facility, which was destroyed by Hurricane Irma in 2017, previously attracted hundreds of cruise ship passengers on a daily basis and is a “significant boost to our offerings.”

Mr. Day, who works for a yacht charter company, told the Beacon that these plans will not go unchallenged, and he will present his petition to the government at the end of the month.

“I know a lot of people here share my views, and public opinion worldwide is turning against these swim-with-dolphin programmes,” he wrote in a message to the Beacon, adding, “I hope the government will see that it’s not a popular decision and reconsider.”

For 16 years Dolphin Discovery operated a facility in Tortola where visitors paid to swim with dolphins and take part in activities such as “belly rides” and “dorsal tows.”

After the facility was severely damaged by Irma in September 2017, the company evacuated its resident 15 bottlenose dolphins to Jamaica and the Dominican Republic.

“Very little good news came about as a result of Hurricane Irma, which decimated our Virgin Islands in 2017,” Mr. Day wrote on the change.org lobby site, where his petition is posted. “One bit of positivity, however, was the destruction of the captive dolphin facility and tourist attraction run by Dolphin Discovery.”

He said the attraction provided an “outdated form of entertainment” which many travel companies have stopped promoting.

TripAdvisor announced this month that it would not sell tickets to attractions that breed or import captive whales and dolphins used for public display.

“The practice of exploiting these intelligent, social animals is out of step with the modern world, basic decency, and increasingly the law, as countries, most recently Canada, continue to ban this vile exploitation,” Mr. Day wrote, adding that reopening the Tortola dolphin park would “bring shame on all of us who call the BVI home.”

On Oct. 4, Premier Andrew Fahie, who also serves as minister of tourism, told reporters that a new agreement to have Dolphin Discovery operating back in Tortola is being finalised.

He said he hoped it would be signed within the next few months and that the park would be reopened in time for the height of the cruise ship season in 2020.

Mr. Fahie described the park as a “significant boost to our offerings to the cruise liners” and said up to 500 people per day previously participated in the attraction.

“Most of the cruise liners and their passengers have insisted that they want the return of the Dolphin Discovery,” he said. “So we will be working on that feverishly.”

As of press time yesterday, Mr. Day’s petition, titled, “Stop the return of captive dolphins to the British Virgin Islands,” had gathered 4,022 signatures, according to change.org.

The website does not verify the identities of signatories, but hundreds of people from around the world reportedly wrote comments on the site opposing the use of captive dolphins for entertainment.

Petitioner Lucy Woodford wrote, “No animal should be used for human entertainment — it is inhumane. It is not an answer for tourism, it’s cruel and should be illegal! Don’t waste your money on this disgusting project.”

Natasha Ruscheinski, a VI resident who founded the non-profit organisation Promoting Animal Welfare, posted, “Keeping dolphins in captivity is extremely cruel. The BVI has so much to offer tourists without stooping to animal cruelty simply to make a profit.”

Kay Reddy added that the territory should encourage wild dolphins — which she pointed out can swim at 25 miles per hour and dive to 300 metres — to play freely in the Sir Francis Drake Channel.

“BVI would be a world-class attraction,” she wrote on the petition page. “What dolphins do not do is belong in shallow steaming stagnant ponds forced into false behavioural displays for entertainment.”

And signatory Cathryn Hempel wrote, “There are plenty more humane ways for the BVI government to make money off tourists. We don’t have to resort to capturing intelligent animals and force them to drag overweight tourists around a swimming pool. Let’s rather see these creatures in their natural environment.”

Neither Dolphin Discovery representatives nor Mr. Fahie responded to requests for comment.’

In September 2017 Hurricane Irma tore through the Prospect Reef Dolphin Discovery centre, but all the 15 resident dolphins survived unharmed.

The company later released a statement explaining that an “evacuation-of-species protocol” had been activated at the site before the storm’s arrival “due to the trajectory and the imminent impact.”

Forty-eight hours before the storm arrived, a support team from Dolphin Discovery’s corporate offices transported the mammals to the hotel pool as a “first refuge,” according to the company.

“When the hurricane passed, the specimens and all the staff were in perfect conditions,” an October 2017 press release stated. “Unfortunately, their habitat, as well as the entire island, suffered damages in the structure.”

The dolphins were transported to other marine life centres in Jamaica and Dominican Republic.

“All of them arrived in an excellent state of health as they remain until today,” the company claimed at the time.

Meanwhile all staff members who suffered damage to their homes were relocated to other islands with Dolphin Discovery habitats.

Shortly after the 2017 storms, a change.org user posting under the name Lisa Pisani created another online petition demanding the closure of all Dolphin Discovery sites across the Caribbean, which racked up 1,820 signatures.

In her post, Ms. Pisani wrote that she was motivated to push for change after struggling to get information on the animals held at the “dolphin prisons” following the storms.

“My mission is to NEVER allow Dolphin Discovery to open again, ever, in the Caribbean. This is the chance to shut them down for good,” she wrote.

She had planned to send the petition to dolphin-trainer-turned-animal-welfare-activist Richard O’Barry, who in 1970 founded the Dolphin Project, a United States-based group that aims to educate the public about captivity and free captive dolphins.

However, Ms. Pisani’s target of 2,500 signatures was never reached.

Luis Cabrera, then the general manager of Dolphin Discovery in Tortola, at the time told the Beacon that he was aware of Ms. Pisani’s petition, but said that no one had directly contacted the centre regarding the welfare of the dolphins.