Local News > At Pier Park, a celebration of culinary culture

At Pier Park, a celebration of culinary culture

When Dr. Nikki Rubaine pulled up to the food fair at the Cyril B. Romney Tortola Pier Park on Friday, she knew exactly what she wanted to eat: gooseberry stew, …

END_OF_DOCUMENT_TOKEN_TO_BE_REPLACED 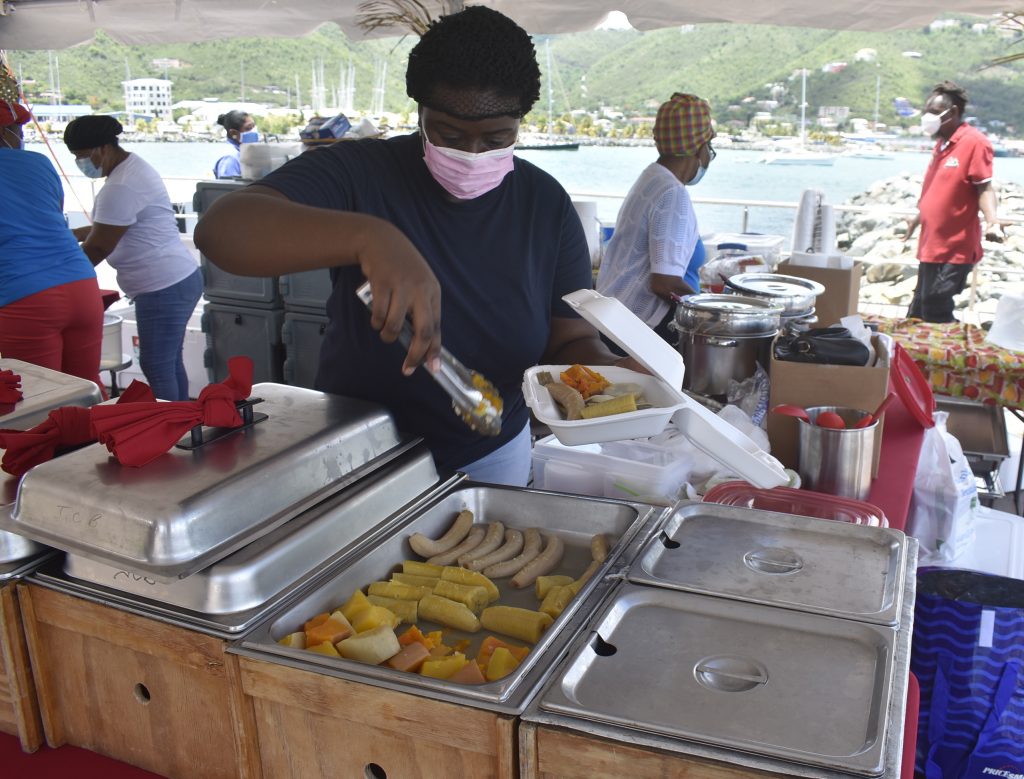 When Dr. Nikki Rubaine pulled up to the food fair at the Cyril B. Romney Tortola Pier Park on Friday, she knew exactly what she wanted to eat: gooseberry stew, tamarind stew, and, most of all, cassava bread.

Baking cassava bread “is a challenge that not many people know how to do, and when the older ones are gone I’m afraid that I won’t ever eat it again,” said Ms. Rubaine, the owner of Smile Dental Spa in Road Town.

The penultimate event in the 66th annual August Emancipation Festival, Friday’s fair saw farmers, cooks, artisans and brewers set up shop all over the Pier Park to serve local favourites, as well as dishes that are becoming increasingly rare as time goes on.

One such treat was what Amy Gordon — who alongside her sister sold pastries, pies, and drinks — called “poya bread,” a circular brown mound which is made with cornmeal and tastes as though it’s been tinged with honey.

As with so many VI classics, it is a dish that Ms. Gordon was taught by her mother, she said.

Sweets were not the only thing on the menu. Facing the water, a long queue of people stood by socially distanced markers to wait for their food from Jenny’s Kitchen, where deep metal pots held bright-orange pumpkin soup flecked with pepper, and the cooks lathered a rich brown sauce atop oxtail and rice.

Elsewhere, a woman wearing traditional garb fanned the flames from an open-faced grill where she was roasting ears of corn.

The park did not start to get busy until around 12:30 p.m., though it never really got crowded, with the food stalls mostly spread out across the dirt field towards the back of the park, and a few vendors lining one of the roads leading to the park’s entrance.

A couple hours into the festivities, onlookers gathered aside the grassy lawn in front of Beans coffee shop to watch a troupe of moko jumbies dance, before Director of Culture Katherine Smith and Education, Culture, Youth Affairs, Fisheries and Agriculture Minister Dr. Natalio “Sowande” Wheatley took to the stage to remark on the importance of the VI’s culinary heritage.

“We can’t celebrate our emancipation … without our Virgin Islands food. This is the food that sustained us through very difficult times, very difficult years in the past,” Dr. Wheatley said.

Elders from the community then told stories about the central role of food in VI society, and once all the speakers had said their piece and the stage equipment was dismantled, music from a steel-pan band filled the air.