“I am proud to announce that we are back,” Tortola Pier Park Limited CEO Vance Lewis said Friday during a ceremony that saw the park renamed after former Chief Minister …

END_OF_DOCUMENT_TOKEN_TO_BE_REPLACED 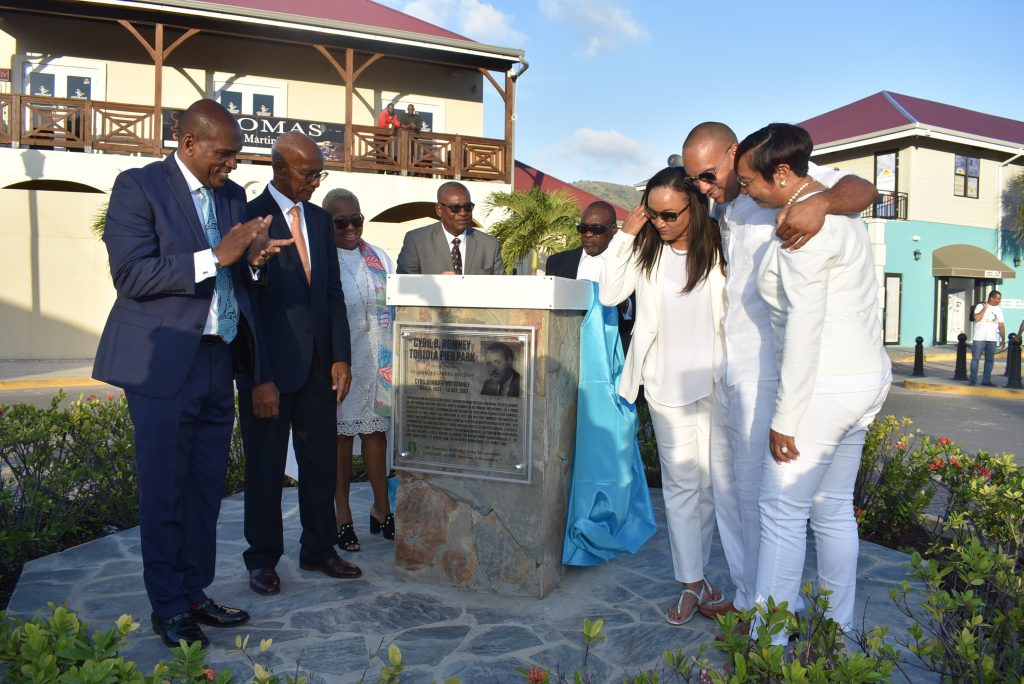 The new name of the Cyril B. Romney Tortola Pier Park pays tribute to the former chief minister who played a key role in developing the territory’s cruise industry. (Photo: GENEVIEVE GLATSKY)

“I am proud to announce that we are back,” Tortola Pier Park Limited CEO Vance Lewis said Friday during a ceremony that saw the park renamed after former Chief Minister Cyril Romney.

The event, held a day before the three-year anniversary of the park’s opening, represented the ongoing recovery of cruise tourism nearly a year and a half after Hurricane Irma dealt a punishing blow to the industry in the Virgin Islands.

Mr. Romney played a key role in cultivating the VI as a cruise destination, speakers said during the ceremony.

His efforts to boost cruise tourism included the founding of the travel agency Travel Plan, his purchase of the Prospect Reef hotel chain, and the opening of a Dolphin Discovery franchise, said BVI Ports Authority Chairman Wendell Gaskin. Mr. Romney died of cancer in 2007.

Several government officials attended the ceremony at Wickhams Cay, including Premier Dr. Orlando Smith, who gave remarks while attendees fanned themselves with their programmes as the sun crept under the white tent.

BVI Tourist Board Director Sharon Flax-Brutus said that the territory is back on track to reach the 700,000 yearly cruise visitors that it attracted before the hurricane. She added that it would likely surpass that mark “by 2020.”

“Our dominance in the cruise sphere in the Caribbean would have not been possible without Mr. C.B. Romney,” she said. “He was the engineer, the architect and the visionary for this industry in our BVI.”

She called Mr. Romney “the face of BVI tourism” and praised his “astute business mind” and vision for the future of cruise tourism in Tortola and Virgin Gorda.

“He introduced an industry that has also allowed many British Virgin Islanders to become entrepreneurs, businessmen and businesswomen in their own right,” she said.

One of Mr. Romney’s daughters, Patricia Romney, also spoke at the event, recalling boarding cruise ships as a 10- year-old to help her father “schmooze with the captains and hotel and tour managers.”

Ms. Romney was one of about 20 members of the Romney family who attended the ceremony wearing white t-shirts printed with the honouree’s face.

“Our father knew that his girls were the deal-clinchers,” she said as she recalled traveling to conferences with him in the United States and Europe as he promoted the VI and developed relationships with cruise ship executives.

“Cyril Romney kept their attention with tales and information about his beautiful and beloved country and the benefits they would achieve if only they would take a chance on the little BVI.”

She went on to describe memories of her father taking President Jimmy Carter deep-sea fishing and entertaining Reverend Jesse Jackson in their home, expressing her gratitude for the tribute to her father’s memory.

“I am at a loss for words convey the depths of our appreciation,” Ms. Romney said.