A pilot died when the plane he was flying overran the runway at the Terrance B. Lettsome International Airport on Wednesday afternoon and ended up in the sea near Trellis …

END_OF_DOCUMENT_TOKEN_TO_BE_REPLACED 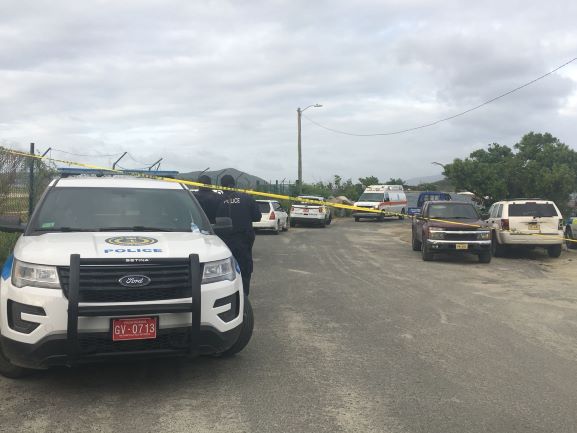 Police cordoned off a dock at Trellis Bay that responders were using to access the wrecked plane. (Photo: CLAIRE SHEFCHIK)

A pilot died when the plane he was flying overran the runway at the Terrance B. Lettsome International Airport on Wednesday afternoon and ended up in the sea near Trellis Bay, according to police and other officials.

The pilot, who was the only person aboard the plane, has not been publicly identified, but Virgin Islands Search and Rescue member Phil Aspinall said police information suggests he was an Angolan national with a United States passport.

VISAR received a call about the incident from the United States Coast Coast Guard at around 4:21 p.m. and arrived on the scene a little before 5 p.m. to find the Cesna C150 in the water near the end of the runway, according to Mr. Aspinall.

The pilot had already been pulled from the wreckage by “good Samaritan divers” who were on the scene and CPR was being administered, according to Mr. Aspinall.

Police, however, confirmed minutes before 6 p.m. that the pilot had died, and what appeared to be a body bag was visible on the Trellis Bay dock that responders were using to access the wreck.

The plane was headed to Pointe-à-Pitre International Airport in Guadeloupe at 4:17 p.m. and had six hours of fuel on board, according the BVI Airports Authority.

“The BVIAA’s Rescue and Fire Fighting Service swiftly sprang into action and was able to quickly secure the pilot, the only occupant of the aircraft,” a BVIAA statement explained.

The airport is closed to facilitate the recovery effort.