Last week, a patient who previously couldn’t feel one of his arms left Bougainvillea Clinic with a new lease on life after doctors there performed a vertebral disc replacement surgery …

END_OF_DOCUMENT_TOKEN_TO_BE_REPLACED 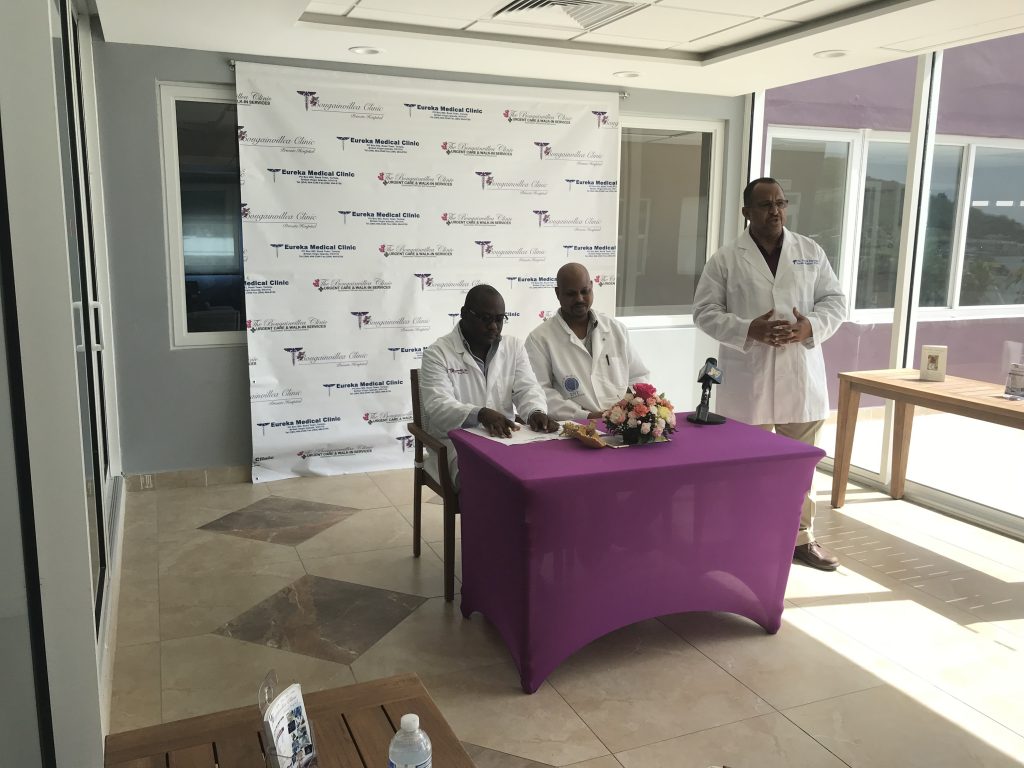 Last week, a patient who previously couldn’t feel one of his arms left Bougainvillea Clinic with a new lease on life after doctors there performed a vertebral disc replacement surgery that had not been performed in the Caribbean outside Jamaica, doctors said during a press conference last Thursday.

According to neurosurgeon Dr. James Geoffrey Liburd of Nevis and ear, nose and throat specialist Dr. Kwesi Davis of Jamaica, the patient was suffering from cervical radiculomyelopathy, meaning a normal disc in the neck was compressing the nerves or spinal cord. This can cause pain, numbness and discoordination, but only a small fraction of cases require surgery.

“Most of these patients will come to us and say, ‘Hey, doc, we have neck pain.’ Pain in their fingers. They can’t move their legs or walk,” Dr. Liburd said.

In the past, when surgery was required, previous techniques involved fusion, in which the disc was removed and the pressure taken off the nerve and spinal cord.

Surgeons would take a piece of bone from the hip, put that bone into the space, and put a plate over it, Dr. Liburd explained.

However, this procedure often limited neck motion, leav- ing patients unable to bend backwards or forwards. Generally, they would require further operations within the next ten years.

With disc replacement, the patient regains mobility much more quickly, the surgeons said.

“The patient who underwent this major operation was up and walking later that afternoon and was discharged from hospital having regained sensation in the arm that was affected by these prolapsed discs,” said Dr. Heskith Vanterpool, owner of the practice. “The Bougainvillea Clinic has been doing a number of first-type procedures in the Caribbean. These are highly specialised and very important procedures that we are doing here.”

The technology the doctors used was manufactured by Centinel Spine, a company based in Pennsylvania specialising in anterior column reconstruction. Golfer Tiger Woods, who received similar surgery after a major back injury, contributing to his career comeback this year, is now a spokesman for the company.

Doctors also explained other advantages of the new technique. Patients benefit from the surgery being done locally with no travel required, they ex- plained, and the VI workforce is less affected since patients can return to work earlier. The lack of additional surgeries is appealing to the National Health Insurance system as well, they said.

“The [NHI] has been quite helpful in getting this sort of technology to the people of the BVI,” Dr. Liburd said. “A lot of us in the Caribbean, we always look north and think that everything that is north of us is better than what we have at home, … but it’s not always so. We are well trained; this is what we do. For me, my patients come first.”

He reassured reporters that he waited until the right technology existed in the VI to do the surgery.

“I’m obsessive compulsive about things like that,” Dr. Liburd said.

Even with the new technique, like any surgery, there is a risk of bleeding and other complications, the doctors said.

But “everything we are doing is geared toward complication avoidance,” Dr. Liburd explained.

Already, patients from Anguilla and St. Maarten have expressed interest in receiving treatment in the VI, which Dr. Liburd said is on par with the care received in “any first-world country.”

“You can see here that we are getting our own medical tourism right here, so that is good for us as well,” he said.