The Covid-19 pandemic has hampered numerous infrastructure projects in the territory by causing raw material shortages, delaying supply shipments, and limiting working hours. But progress nevertheless has been made, including …

END_OF_DOCUMENT_TOKEN_TO_BE_REPLACED 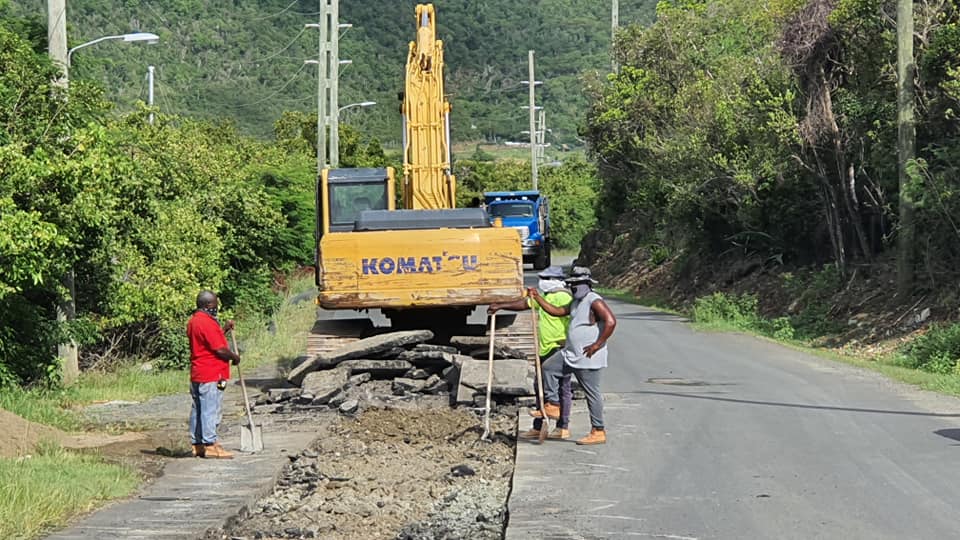 Work is once again under way on the East End/Long Look Sewerage Project, which has been promised for decades with minimal progress. About 1,300 feet of main lines are currently being laid, according to an update from Transportation, Works and Utilities Minister Kye Rymer delivered at Aug. 12’s House of Assembly sitting by Premier Andrew Fahie. (Photo: GIS)

But progress nevertheless has been made, including the recent commencement of the long-delayed East End/Long Look Sewerage Project, according to Transportation, Works and Utilities Minister Kye Rymer.

Premier Andrew Fahie delivered a statement on this project and other infrastructure works Aug. 12 in the House of Assembly on behalf of Mr. Rymer, who was absent from the sitting.

Mr. Rymer noted that the sewerage project “has been long in coming and is of national importance.”

Last October, government announced its intention to award at least 40 petty contracts worth $6.14 million to restart the project, which is designed to provide the village its first public sewer system by connecting it to a Paraquita Bay treatment plant built nearly six years ago.

At the time, Mr. Rymer anticipated that the project would be completed by this October, but it has been hit with delays since then. Last week, Mr. Rymer did not provide a new target completion date, but he touted the recent launch and said the current system relies on “overwhelmed” private sewers. “I am pleased to see that actual works have commenced to complete the force main pumping in the vicinity of Paraquita Bay,” Mr. Rymer noted in the statement Mr. Fahie delivered Aug. 12.

He added that workers have started to install 1,300 linear feet of force main lines to connect with those leading to the treatment plant.

“The works are projected to last for approximately two weeks, and we apologise to the motorists and residents of the East End/Long Look community for the inconveniences caused while we detour traffic to facilitate these works,” he stated, noting that work at Fat Hogs Bay would be next.

Area roads would be closed from 7 a.m. to 6 p.m. until Aug. 13, according to a related press release. Though residents would still have access to their homes, traffic would be diverted along Ridge Road between Long Swamp and Fort Hill.

The TWU Ministry is also working behind the scenes on fencing the Paraquita Bay staging area, launching the procurement process for gravity sewer lines, and finalising project designs, according to Mr. Rymer.

Deputy Premier Dr. Natalio “Sowande” Wheatley said when visiting the worksite that he was glad to see the project restart, according to the press release.

“We have daily occurrences of persons who are not able to properly dispose of their sewage water,” said Dr. Wheatley, who is also the District Seven representative. “You see it in the roads, and of course it is unsightly and unhealthy.”

Plans to build a public sewer system for East End and Long Look have been in the works for decades but have made little progress, despite costing taxpayers millions in scrapped plans and insufficient work.

In 2010, the Virgin Islands Party-led government awarded a no-bid contract to the United Kingdom-based Biwater, which resulted in Biwater’s completion of a water plant and two sewage treatment plants: one at Burt Point and one in Paraquita Bay.

The Burt Point facility started processing sewage in late 2015. However, the Paraquita Bay plant, which was completed around the same time, has never been used because government has not yet laid the pipes to connect it to East End, mainly due to a lack of funding.

At least twice, the government transferred money away from the EE/LL project to another purpose: first to the new Dr. Orlando Smith Hospital and then to the Cyril B. Romney Tortola Pier Park project.

The then-National Democratic Party government restarted work once again in 2017, but damage from Hurricane Irma dashed hopes for its completion.

But when Mr. Rymer announced plans for “remedying the sewerage woes that have plagued this community for decades” last autumn, he said the project would be completed in three phases, all done within 12 months.

He did not provide an update on the Burt Point plant, which has not operated since Irma.