Road Town has been buzzing with construction in recent days as work has started on a planned six-storey building between Clover’s and Said Department Store. With an estimated cost of …

END_OF_DOCUMENT_TOKEN_TO_BE_REPLACED 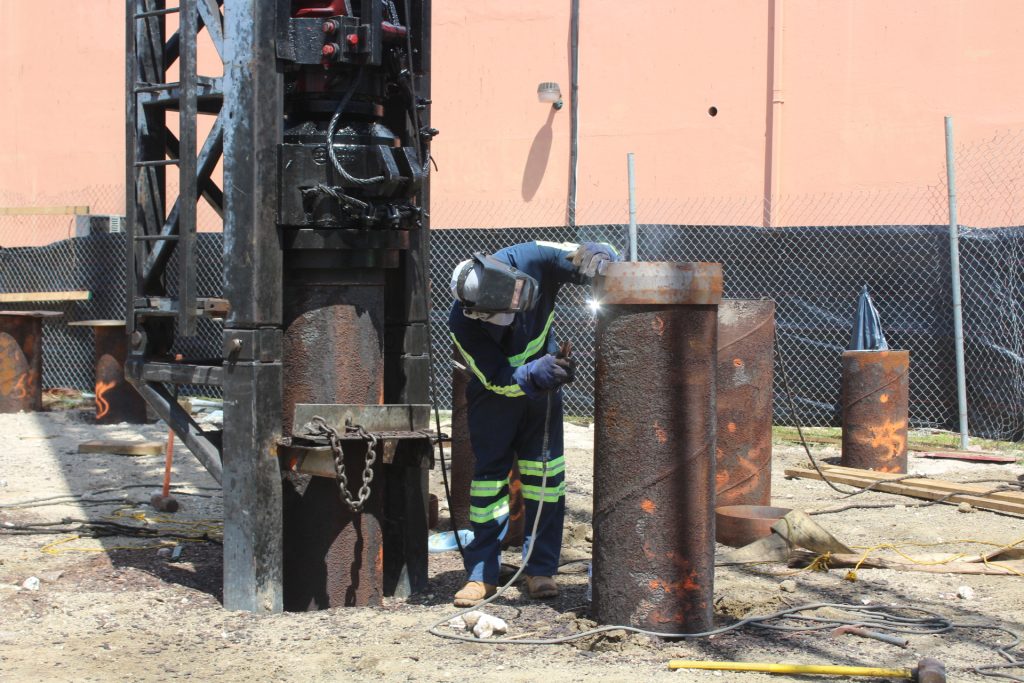 Road Town has been buzzing with construction in recent days as work has started on a planned six-storey building between Clover’s and Said Department Store.

With an estimated cost of $3.1 million, the planned 35,355-square-foot building will be used for office and retail space, according to the building application.

The application — which states that no additional parking is planned for the site — was received by the Town and Country Planning Department on Nov. 11, and it was approved on Dec. 17.

The 5,310-square-foot building that previously occupied the site, which housed the Church of the Islands, sustained heavy hurricane damage in 2017 and was demolished recently.

Meridian Construction Ltd. is currently driving piles into the ground. Fransym Blyden, an engineer at Meridian, said yesterday that work on the foundation has been ongoing for two weeks and will continue for at least another two weeks.

Standing atop 83 piles that are driven 55 feet into the ground and able to support 4,980 tons, the building will also be able to withstand earthquakes, according to the crew on the site.

Business has gotten slower for the company in light of Covid-19, but it is still continuing, they said. Michael Daguiar, a crane operator who has worked with Meridian for 20 years, said work will slowly reach a steady pace once the Covid-19 restrictions are lifted further.

Though workers have gotten complaints from people working in town, they haven’t faced any deterrence in the construction, he added.

Meridian will only lay the foundation for the new building, according to the crew.

While the construction site has markers indicating that James Todman Construction is the contractor for the project, efforts to reach that company for confirmation were unsuccessful.

Building applicant and lessee Linton Wheatley told the Beacon Tuesday that he was busy and unable to speak for a few days, and he requested an email or WhatsApp message. As of press time, he did not respond.

Attempts to reach Mardel Architects, listed as the agent of the development, were also unsuccessful.

The Cutlass Building, a six-storey structure owned by Patsy Lake that was rechristened on Jan. 31, 2013 following an expansion, faced some deterrence during the renovation process. But despite objections from nearby landowners, multiple compliance notices, and stop-work orders
from the TCPD, the construction was completed in 2011 by Meridian Construction.

The Commerce House, a five-storey office building completed in 2010 by JOMA Property Development, is also built on piles, and stands across Waterfront Drive from the building currently under construction.