The Pockwood Pond incinerator facility caught fire on Monday around 3 p.m. when a small gas tank exploded, according to Greg Massicote, manager at the Department of Waste Management. Reached …

END_OF_DOCUMENT_TOKEN_TO_BE_REPLACED 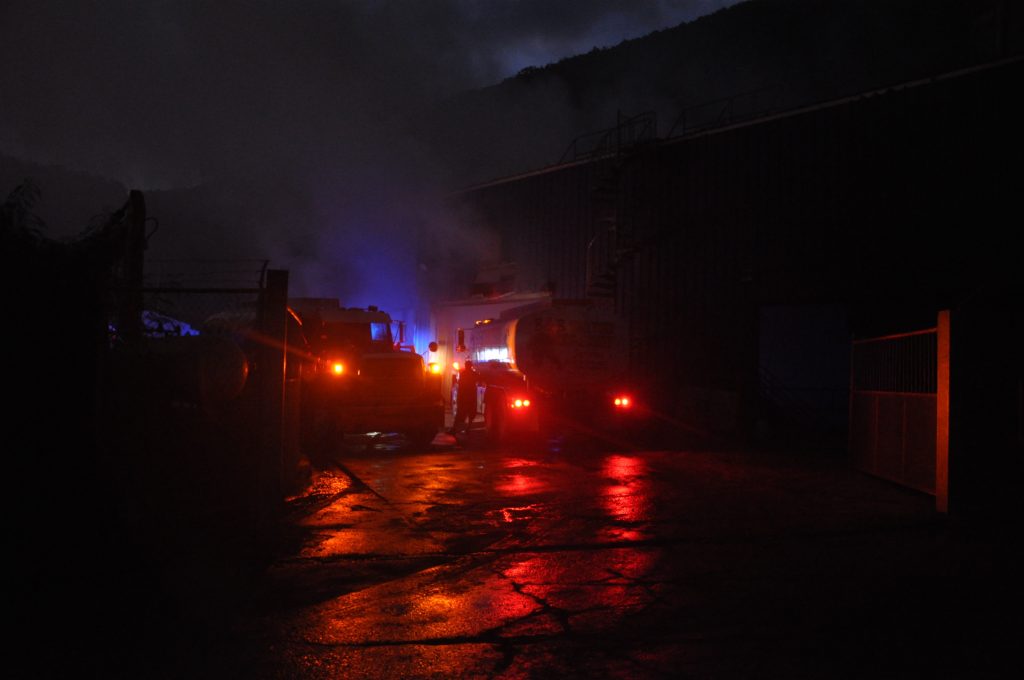 Water trucks responded to the incinerator building on Monday evening to help fight the fire that broke out there. (Photo: FREEMAN ROGERS)

The Pockwood Pond incinerator facility caught fire on Monday around 3 p.m. when a small gas tank exploded, according to Greg Massicote, manager at the Department of Waste Management.

Reached Monday evening, Mr. Massicote said he was still trying to confirm details about the cause, but employees who were nearby at the time informed him that after the tank exploded, the fire “eventually got its way into the building and into the pile of garbage.”

In a statement released Tuesday, Chief Fire Officer Zebalon McLean said that the fire was under control and that West End residents were in no danger.

He added that firefighters had been on the scene since Monday trying to extinguish the remaining flames with the assistance of pressurised water systems provided by the BVI Electricity Corporation.

Heavy equipment was being used to separate the materials and contain the fumes, he said.

“Later it became a matter of turning the stuff over, tamping it down and putting it over all the hot spots due to the amount of the debris,” he told the Beacon.

The chief added that firefighters were expected to be working in shifts at the site through yesterday.

Mr. McLean declined to speculate on the extent of the damage to the incinerator, deferring to Waste Management.

“They will be able to give us an accurate idea of what we lost and what needs to be replaced,” he said. “Those guys will be able to quantify what they lost. We don’t want to hazard a guess.”

Mr. Massicote said on Monday that the gas tank was not stored there deliberately but was simply waiting to be sorted.

“We separate the metal and flammable stuff before loading it into the incinerator,” he said. “It’s not something we were storing there haphazardly.”

He added on Monday that more details likely would not be available until after he and his staff could view the site.

However, when reached again yesterday morning he was unable to immediately comment.

Mr. McLean said Tuesday that officers are mindful to cut down as much as possible on the amount of smoke residents are exposed to, which was one of the main reasons they remained on the scene.

Residents should “try to keep their windows and doors closed in the meantime,” he said.

“We are asking persons not to bring garbage into the area,” Health and Social Development Minister Marlon Penn said in a video.“We are also working to get under control the heap outside the incinerator to prevent any additional spreading of the fire.”

In recent months, DWM has had to cope with multiple trash fires across three different islands, including a large one that broke out at Coxheath on Aug. 30.

At the time, Mr. Massicote told the Beacon that the department was “overwhelmed” with the amount of waste coming in since Hurricane Irma.

At a Nov. 8 meeting, Cabinet agreed to waive the tendering process and issue a contract worth more than $300,000 to Tortola Concrete Products for extinguishing the Coxheath fire, and allocate more than $800,000 to DWM for its medium-term debris clearance plan.

In addition, Cabinet agreed to issue $600,000 worth of funding to DWM to purchase proper waste-disposal equipment.