This article originally appeared in the Beacon’s print edition on Dec. 6. Last week one of the latest police recruits — a 15-month-old Belgian Malinois named Reddick — was tasked …

END_OF_DOCUMENT_TOKEN_TO_BE_REPLACED 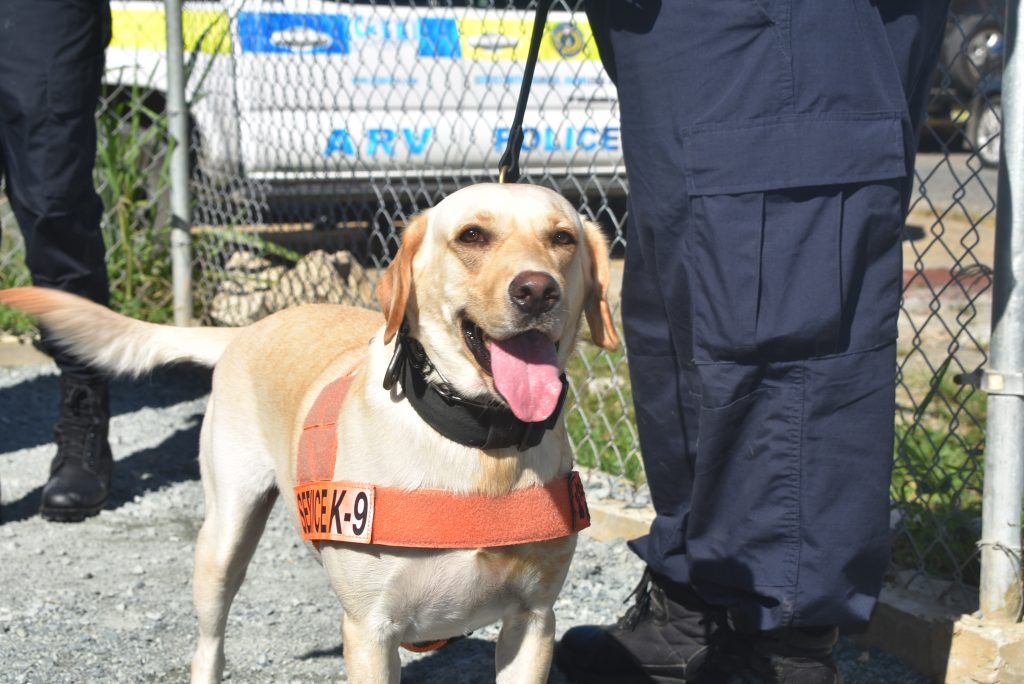 The latest K-9 unit is made up of Reddick, Boscoe and Patti (pictured). (Photo: AMANDA ULRICH)

This article originally appeared in the Beacon’s print edition on Dec. 6.

Last week one of the latest police recruits — a 15-month-old Belgian Malinois named Reddick — was tasked with finding illegal materials.

As a demonstration of the dog’s skills on Nov. 28, black boxes had been set up in the Road Town Police Station’s parking lot, one of which contained a training odour of explosives or narcotics.

Once Reddick located the correct box, he was presented with his reward: a blue bouncy ball, which he quickly lost under a police vehicle. Fortunately, newly trained handlers were also there to help: An officer got down on his hands and knees to look for the dog toy.

Reddick and Boscoe are trained to detect narcotics and firearms, whereas Patti is a “single-purpose” dog trained to detect explosives. Last week, Police Commissioner Michael Matthews referred to Patti as “our specialist.”

Three Virgin Islands officers — Curtis Roberts, Nodu Emelandu and Gleason Lafeuillee — are also now trained to work with the dogs after a three-week programme in Orlando, Florida this summer.

“This additional capability, we believe, will bring greater results and greater safety to the territory,” Mr. Matthews said of the unit.

Though these particular dogs are new to the force, the RVIPF previously had another K-9 unit. Two German shepherds had to be retired “due to age” around 2015, Mr. Matthews said.

“Unfortunately, no budget was allocated to replace them at the time and the unit was disbanded,” he told the Beacon.

When Mr. Matthews arrived in 2016, he pitched the need for another K-9 unit to then-Governor John Duncan, who supported the idea and directed the initial funding for the programme, according to the commissioner.

“The hurricanes led to a delay, of course, but hopefully [we’re] back on track now,” he said.

The former kennel block, positioned near the front office of the RT station and affixed with a sign that reads “Beware of Dogs,” has been refurbished. For instance, new side windows have been added to increase airflow for the dogs, the commissioner said.

“The welfare of the animals is my absolute top priority,” he said.

The dogs will not go home with their handlers — as is sometimes the case in other police forces — but will instead live in the kennel during off-duty hours.

Chuck Pipkin, who helped source and train the three dogs through the K9 Protection Training Academy in Florida (alongside Paris Nicholson, the owner of the company), said that this arrangement “works pretty well.”

“We’ve seen issues in the past just with sending dogs home with handlers. So this way, in case, you know, they have a day off or something else like that, they don’t have to worry about putting the dog some place,” he said. “So they put them here; they’re always here. If someone gets called out after hours, they can come straight here and pick up the dogs.”

Mr. Pipkin, a former dog handler himself, said that keeping a police dog at home could mean taking children and other family members into consideration, ultimately requiring a secure area.

The RVIPF’s kennel is “very secure,” Mr. Pipkin said, adding that it is always kept clean. Handlers also come in twice a day to feed the dogs and clean the area.

“The dogs need some down time, too,” he explained. “I mean, they’re working with these guys all day long — eight, 10, 12 hours a day. It’s okay for them to come here, chill out, and not be asked to do anything.”

After their initial training in Florida, the dogs completed another week of training in the territory.

Despite being recent transplants to the force, the trio has already had successes, Mr. Pipkin and the police commissioner confirmed.

“In fact, we actually went out with the Armed Unit and did some real searches of vehicles and houses,” Mr. Pipkin said. “Both the narcotics dogs were able to locate controlled substances, and [we] took those into custody.”

Mr. Matthews said the next step is to train the dogs beyond the detection of drugs and explosives.

“We’re looking now at training them for the scent of money, because we know that there’s been a lot of cash floating about in the territory,” he said. “You’ve seen some of the arrests recently with Customs and ourselves in that regard.”

Governor Gus Jaspert presented certificates to each of the three new handlers, as well as to Reddick, Boscoe and Patti.

“Because they’ve earned the certificates too,” the commissioner said.