Local News > Police respond to ESHS, but tight-lipped on ‘disturbance’

Police respond to ESHS, but tight-lipped on ‘disturbance’

Police officers responded to the temporary Elmore Stoutt High School in Pasea after a “disturbance” there on Monday morning, according to Police Information Officer Diane Drayton. In a two-sentence statement …

END_OF_DOCUMENT_TOKEN_TO_BE_REPLACED 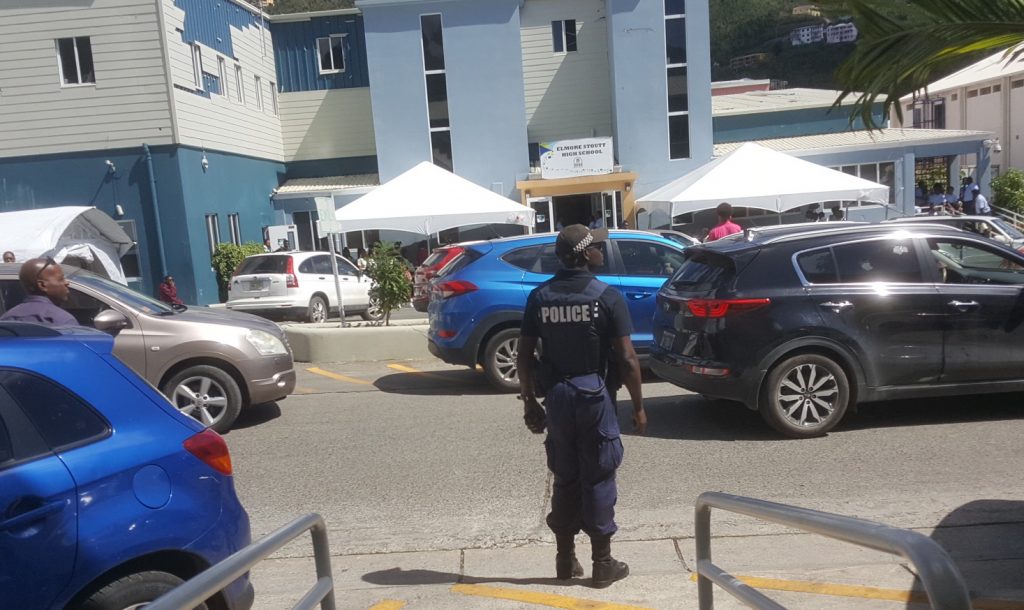 A police officer in a bulletproof vest was among several who responded to the Elmore Stoutt High School in Pasea after a “disturbance” on Monday morning, police said, but they didn’t provide further details about the incident or possible risks to students. (Photo: FREEMAN ROGERS)

Police officers responded to the temporary Elmore Stoutt High School in Pasea after a “disturbance” there on Monday morning, according to Police Information Officer Diane Drayton.

In a two-sentence statement released at 12:14 p.m. Monday, Ms. Drayton said the officers had been deployed to “restore calm.”

“These officers are working with the security and will remain on campus until all immediate risks to students are eliminated,” the press release stated.

Police did not, however, explain what those risks might be or provide further information about the nature of the “disturbance.”

At least six police officers, some of whom were wearing bulletproof vests, were patrolling the area on foot.

At 1:05 p.m. government released a one-sentence statement saying that Connie George, the chief education officer in the Ministry of Education and Culture, was “informing the public that contrary to earlier reports that there was a lockdown at the Elmore Stoutt High School, regular classes are continuing at the school.”

The government provided no further information.