When musicians 3G’s took the stage at Sebastian’s on the Beach on Feb. 26 to debut their new single, they performed to a crowd so large that restaurant staff prepared …

END_OF_DOCUMENT_TOKEN_TO_BE_REPLACED 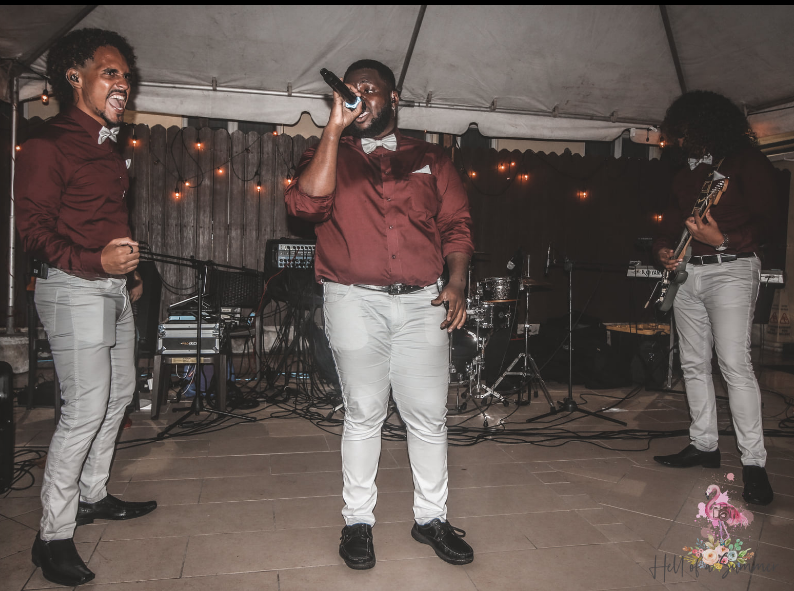 The 3G’s played to a crowd at Sebastian’s on the Beach on Friday night but never got the chance to debut their new single as police responded to a noise complaint and shut down the party early for alleged Covid-19 crowd restrictions. (Photo: JJ MIKO)

When musicians 3G’s took the stage at Sebastian’s on the Beach on Feb. 26 to debut their new single, they performed to a crowd so large that restaurant staff prepared extra tables outside.

But before they got to break out their new tune, police officers responding to a noise complaint shut the party down.

Although police stated that the event violated Covid-19 regulations, Sebastian’s General Manager Dahlia Forbes contended that the restaurant strictly complies with the rules set by government, and pushed back against the police’s claim that the crowd exceeded 175 people.

However, she estimated that 155 people attended Sebastian’s on Friday, which according to police still would be too many.

“Public Health Order 2020 (Covid-19 Control and Suppression Measures) states under subsection four that all gatherings shall be limited to one person per 64 square feet and shall not exceed 75 persons at any given time,” police stated in a Sunday press release, adding that the limit is 175 for graduations, weddings and funerals.

“The order also states where the organisers of an outdoor event anticipate that the event will exceed a gathering of 75 persons, he or she shall make a written request to the minister seeking permission to hold the event.”

However, police appeared to be referring to an Oct. 22 version of the order, which was amended the following month to adjust the crowd limits.

Police Information Officer Diane Drayton did not immediately respond to questions about the discrepancy.

Ms. Forbes also said the timing of the police visit may have led to confusion.

“We anticipated that this event would draw a larger crowd than for past events,” Ms. Forbes explained in an emailed statement, adding, “What we did not anticipate was a handful of rain showers, which forced attendees to leave their seats and seek temporary shelter under the overhang which adjoins our restaurant.”

It was in this “moment of confusion” that officers arrived on the scene to investigate the complaint, Ms. Forbes explained.

Once the officers arrived, the manager pulled one of them aside and asked what was wrong, she said in an interview yesterday.

Because she then complied with their directives to shut down the band and begin to wrap up dinner service, the officer told her that he would give her a warning instead of issuing a fine, Ms. Forbes said.

Even as the band members packed up their instruments, people continued to mill about, and inside the restaurant a group lit candles and sang happy birthday while cutting up slices of cake.

While Ms. Forbes said she tried to make accommodations for what she anticipated to be an unusually large crowd, police stated on Saturday that such a crowd should never have gathered in the first place.

Noting her disappointment in “such a flagrant breach” of the law, acting Deputy Police Commissioner Jacqueline Vanterpool said, “Police must enforce the orders as passed and sanctioned by government. Business owners must continue to abide by the regulations or face the full enforcement of the law.”

In her statement to the Beacon, Ms. Forbes said that Sebastian’s prioritises the safety of its patrons, and that it stringently enforces social distancing, hand washing, and mask wearing.

“We would NEVER intentionally ‘flaunt’ the regulations, as has been reported on a number of news sites,” Ms. Forbes wrote on Tuesday. “We feel the reporting that has been done on this incident to be both incorrect and unethical. We were never contacted for comment on what really took place, which is irresponsible and only served to damage our reputation.”

The 3G’s performance on Friday was the latest in a series of events hosted by Sebastian’s in order to keep the doors open amidst a dismal tourism season.

The restaurant has in recent months created a weekly roster of events, such as bingo and karaoke, designed to entice customers and keep the staff employed, something Ms. Forbes is resolved to do no matter the tough circumstances, she stated.

“We have created events in our restaurant just to keep our staff employed without laying off anyone,” Ms. Forbes stated. “I will not do that.”