As the Virgin Islands approaches the second anniversary of Hurricane Irma, another book has emerged with the stories and accounts of those that were in the middle of the storm. …

END_OF_DOCUMENT_TOKEN_TO_BE_REPLACED 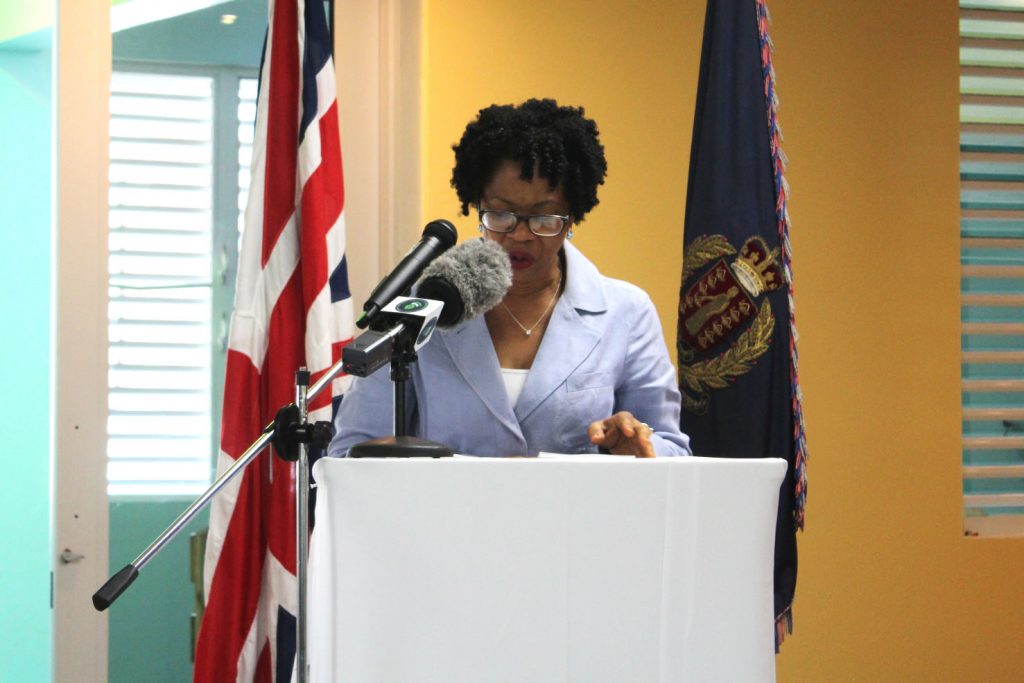 Police Information Officer Diane Drayton, the author of Irma: An RVIPF Perspective, shares her remarks about the book, which launched on May 8. (Photo: ZARRIN TASNIM AHMED)

As the Virgin Islands approaches the second anniversary of Hurricane Irma, another book has emerged with the stories and accounts of those that were in the middle of the storm.

Irma: An RVIPF Perspective is a collection of the accounts of the Royal Virgin Islands Police Force, curated by Police Information Officer Diane Drayton.

“I’m happy that this day has arrived and that this is over,” said Ms. Drayton, who explained that she didn’t want to undertake the feat at first. “To be brutally honest, I didn’t want anything else to do with Irma. I didn’t want to hear anyone else’s drama. I had my own drama.”

It was at the recommendation of Police Chief Commissioner Michael Matthews that Ms. Drayton began her account.

“I listened to one or two stories and I realised I needed to venture off,” she said. “It has been painstaking but it has been fruitful.”

The book was Ms. Drayton’s first, and she said she is encouraged to do more writing of similar publications.

The book launched on May 8 at the Road Town Police Station canteen, where friends, families, supporters and officers gathered to celebrate the occasion. For the officers, this book is the first of its kind and one that plays an important role.

“A person who doesn’t know their history is like a tree without roots,” Sergeant Kenrick Davis said during the ceremonial introduction.

Mr. Matthews addressed Ms. Drayton in his opening remarks. “What you’ve achieved here is something, I believe, that’s going to go down in the history of the force,” he said.

Mr. Matthews elaborated on the book’s sixth chapter. Titled “The High Price of Service,” it recounts the story of acting Chief Inspector Smyrna Brewley, who put her duty before her family, as many others had, he said.

“This story sums up the emotion of working in emergency services in an event that you could not possibly be trained for but you went out and did your best,” Mr. Matthews said.

The officer was on duty, helping throughout the storm by pulling people out of rubble and preventing looting, according to the account. It was only later in the afternoon that she was able to check on her family.

“When you get to the line when she talks about her youngest son staring at her and saying these awful words, ‘You left us here to die.’ To say that to a mother who put her personal interest aside to go out and defend the territory… Words cannot express how that makes me feel,” he said. “That is just one example of what I’m talking about, about why this is an important publication.”

The book accomplished two things, according to Mr. Matthews and Ms. Drayton: sharing the perspective of the officers with the public and giving officers a chance to move on from the trauma.

Like Ms. Drayton, the commissioner also had a hard time rehashing the event.

“This is one way for me, also, to close that chapter,” he said.

Ms. Drayton added, “What I’m really hoping is that this book will open the eyes of the public to what the police officers have to sacrifice to serve this community.”

Books can be purchased at the station.