Despite the previous government’s 2018 plan to steadily increase the hiring of police officers over the following three years, the force will soon have 50 vacancies, Premier Andrew Fahie said …

END_OF_DOCUMENT_TOKEN_TO_BE_REPLACED 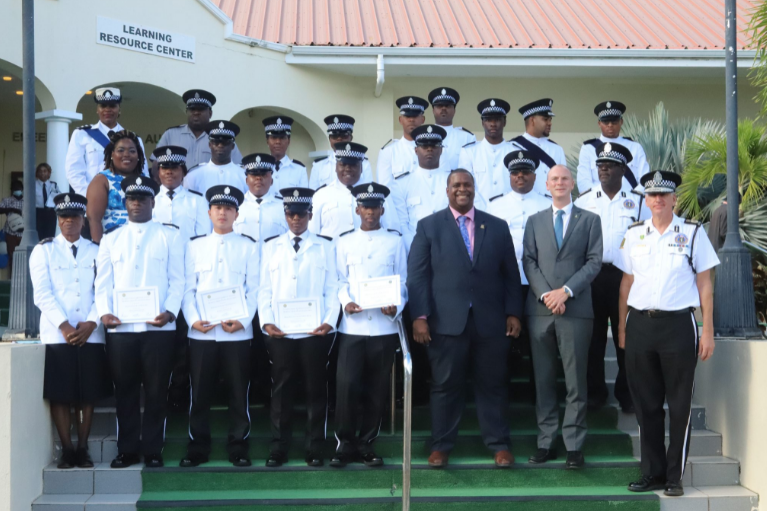 After six months of training, 14 police recruits became constables last June. Due to the coronavirus pandemic and officers retiring, the police force is lagging behind its goal for hiring new recruits, and soon will have 50 vacant posts, Premier Andrew Fahie said during the April 22 House of Assembly meeting. (File Photo: PROVIDED)

Despite the previous government’s 2018 plan to steadily increase the hiring of police officers over the following three years, the force will soon have 50 vacancies, Premier Andrew Fahie said last week in the House of Assembly.

Following the drafting of the Territorial Security Plan in 2018, the then-Cabinet agreed to add 15 officer posts each year for the next three years, the premier said in response to a question from Junior Minister for Tourism Sharie de Castro on April 20.

However, this plan was halted by the coronavirus pandemic in 2020, and as a result of retirements and a temporary moratorium on new hires, the “the full complement of the additional 15 posts” was not hired, Mr. Fahie explained.

He didn’t disclose the total number of officers, but on TuesdayPolice Information Officer Diane Drayton told the Beacon that the force currently employs 233 police and 16 auxiliary officers.

She added that no officers were hired or recruited last year, though 14 were sworn in last June after six months of training.

While the police force has struggled to keep up with its schedule for hiring officers, it has taken to hiring specialised detectives on short-term contracts, Mr. Fahie said.

Following a review in 2018 of the United Kingdom’s model for solving cold cases, the Virgin Islands and UK governments collaborated to fund the contracts for six homicide detectives who each worked in the VI for three months in 2019, Mr. Fahie said.

The force has also increased the size of its vehicle fleet, doubling the amount of squad cars since 2018, Mr. Fahie said.

Additionally, it purchased a new patrol boat called Midnight Justice, but that boat is currently undergoing repairs after a current pushed it onto a reef shortly after it arrived in the territory last summer, Mr. Fahie said.

His account appeared to contradict information provided during a December launching ceremony for the $500,000 boat,when officials said it was repaired and ready to get to work.

The premier added that works have been completed at the West End, East End, North Sound and Cane Garden Bay police stations, while repairs are ongoing at the Road Town and Anegada stations.