To keep the Virgin Islands safe in the coronavirus pandemic, police have tweaked some of their usual tactics and added new ones to help enforce the round-the-clock curfew that is …

END_OF_DOCUMENT_TOKEN_TO_BE_REPLACED 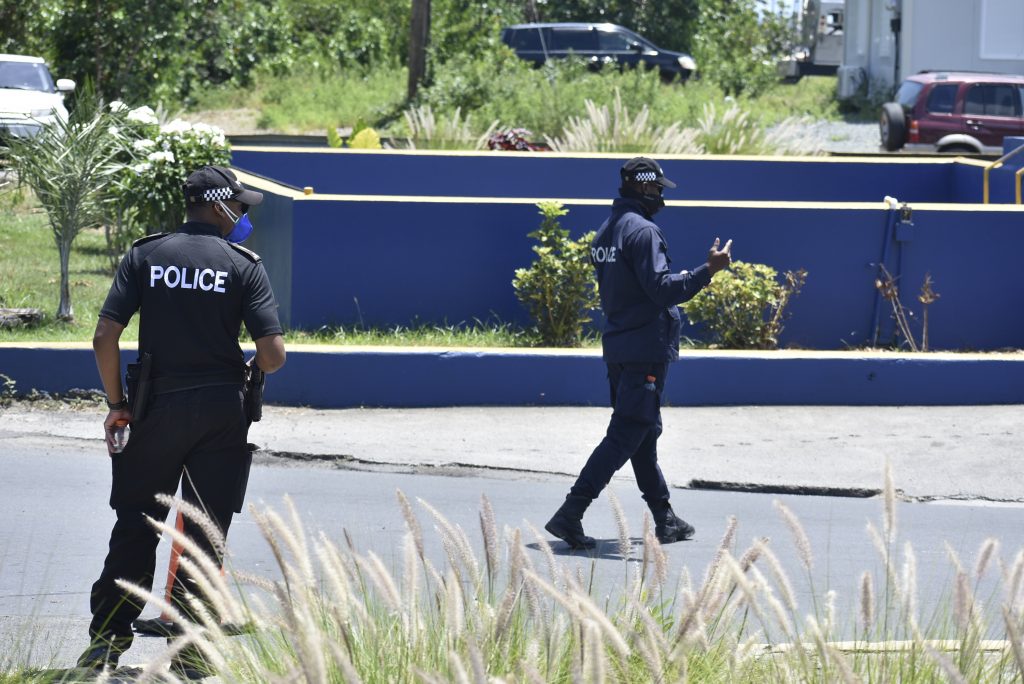 Police direct traffic on Saturday in front of Rite Way Food Market in Pasea as residents stock up on supplies in preparation of the lockdown. Officers have been pulling longer shifts and otherwise adapting to the pandemic. (Photo: CLAIRE SHEFCHIK)

To keep the Virgin Islands safe in the coronavirus pandemic, police have tweaked some of their usual tactics and added new ones to help enforce the round-the-clock curfew that is in effect at least until April 19.

When a police officer finds someone breaking curfew, they have some discretion in deciding whether to arrest them on the spot or simply order them back into their homes and let them off with a warning, Police Commissioner Michael Matthews told the Beacon on Friday.

Due to the highly contagious nature of the coronavirus, there is an incentive not to populate the territory’s prison cells if possible, he added.

“It’s always going to be based on specific circumstances,” Mr. Matthews said, adding, “We should avoid arrests.”

In the first week of curfew, for example, an officer encountered a group of young people walking along the beach with towels in their hand, he said.

When the officer told the group that they were breaking the law, regardless of how close they lived to the ocean, they immediately went home, the commissioner said.

However, an officer would probably arrest someone found lurking in a dark alley late at night, Mr. Matthews said, offering a hypothetical scenario.

“We can then deal with that person in a bit more detail; find out exactly who they are,” he explained.

Officers would also arrest anyone who does not comply with their orders, the commissioner added.

This approach to assessing curfew violators is not the only way the police have altered their tactics, as the force has taken on an overall strategy similar to the one adopted after the 2017 hurricanes, Mr. Matthews said.

He added, however, that while a state of emergency was declared after Hurricane Irma, one has not been declared during the coronavirus pandemic.

Most officers are now working shifts longer than 12 hours, and some departments and police services have been stripped to free up more personnel for patrol duties, Mr. Matthews said.

“As the lights go out and night is there and everything shuts down, the officers still have to be out there in sufficient numbers,” he explained.

With everyone except essential workers required to stay home, which can create isolation and exacerbate domestic violence, it is also important that the police maintain a strong presence in the community, Mr. Matthews said.

Besides reports of curfew violations, the vast majority of calls the police received during the start of the two-week curfew have been related to some sort of domestic situation, according to the commissioner.

“If we are going to require that people be isolated and confined to their own homes, … we must provide the same reassurance that we are out there,” he said.

To drive home this reassurance, police check on businesses and other properties that have been left unattended during the curfew, though during last week’s shopping days they also stationed themselves at the supermarkets and other high-traffic locations, Mr. Matthews said.

Because the pathogen that causes COVID-19 is highly contagious, the police have also had to integrate social distancing into their tactics to effectively keep the public safe, the commissioner said.

For example, officers called to someone’s home would stand outside the door rather than enter, and during a traffic stop, rather than ask someone to step out of a vehicle, an officer in most cases would ask the person to roll down their window and then remain at arm’s length while proceeding with the stop, Mr. Matthews said.

All of these extra measures are intended so that residents receive the same level of service as they would in any other circumstance, according to the commissioner.

“I suppose we are trying to do our best to maintain a sense of normality with all our dealings with the public,” he explained.