Earlier this year, BBC News reported that the small island nation of Kiribati in the South Pacific was considering the purchase of land in Fiji to help secure a future …

END_OF_DOCUMENT_TOKEN_TO_BE_REPLACED 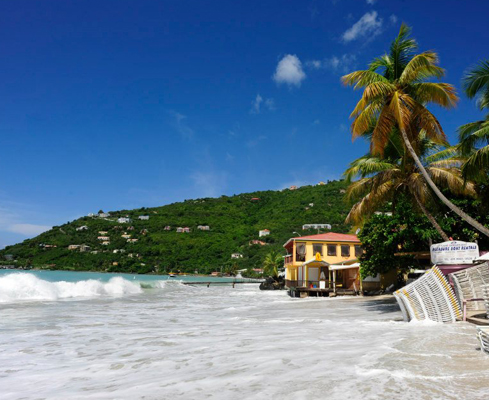 Waves wash over the beach in Cane Garden Bay during a swell on Tuesday, reaching several oceanfront buildings. The water likely will come higher in the coming decades as the global warming causes shorelines to recede, according to a new climate change policy. Photo: TODD VANSICKLE

Earlier this year, BBC News reported that the small island nation of Kiribati in the South Pacific was considering the purchase of land in Fiji to help secure a future threatened by rising sea levels.

The land, according to reports, is wanted mostly to settle Kiribati farmers and to extract earth for sea defences back home, but the nation’s president, Anote Tong, has spoken about moving the islands’ entire population there as a “last resort.”

Though not as extreme as Kirabati’s plan, a new document produced by the Ministry of Natural Resources and Labour seeks to reduce the adverse impacts of climate change in the Virgin Islands and ensure long-term energy security.

“The global scientific community has confirmed that climate change is a real, measureable phenomenon that is happening now and that will affect small island developing states soonest and worst,” states the Virgin Islands Climate Change Adaptation Policy, which was tabled last month in a House of Assembly sitting.