Two days after a man was gunned down in Fish Bay last week, leaders said the recent violence in the territory likely stems from the illegal drug trade, which they …

END_OF_DOCUMENT_TOKEN_TO_BE_REPLACED 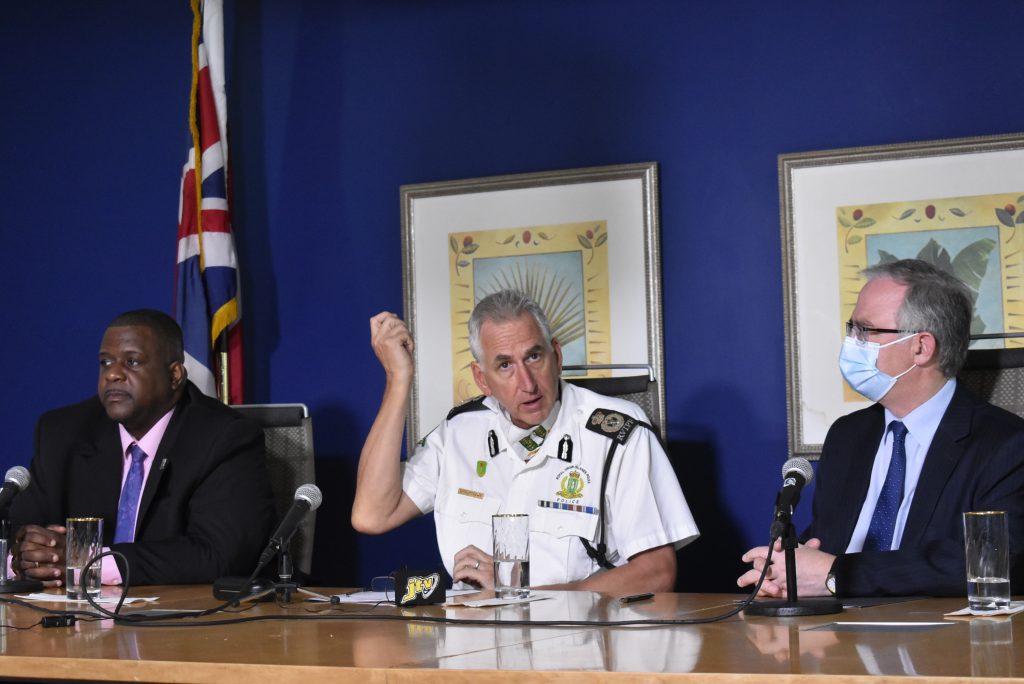 At a March 18 press conference, Police Commissioner Michael Matthews said the police force is beefing up its intelligence-gathering capabilities and increasing the presence of officers on the street in response to escalating violence. But these efforts, he warned, will be fruitless if the public doesn’t work with police to root out criminals. (Photo: JOEY WALDINGER)

Two days after a man was gunned down in Fish Bay last week, leaders said the recent violence in the territory likely stems from the illegal drug trade, which they believe has been interrupted by pandemic restrictions that resulted in an unusually large stash of drugs in the Virgin Islands. Now, law enforcers are working with at least one witness in hopes of bringing charges against the perpetrator of the March 16 killing, and they are doubling down on broader efforts to halt the escalating violence, leaders said during a March 18 press conference.

But in a community as tight-knit as the VI, enhanced police work isn’t enough to get violent criminals off the streets, leaders said.

During the press conference, Police Commissioner Michael Matthews, Governor John Rankin, and Premier Andrew Fahie all said that if the territory is to end the recent wave of violence, residents must more strongly disavow criminal activity among their friends and neighbours, and they must work with each other and with police to root out criminals.

“If we haven’t got witnesses willing to come forward and say, ‘I saw who did it; I saw the registration number of the car or the colour of the vehicle or the direction it went in,’ then we’re going to be lost,” Mr. Matthews said, adding, “The good news is that more people are coming forward.”

Despite an apparent surge in the public’s willingness to work with police and enhanced security measures employed in recent weeks, police are still investigating eight violent or suspicious deaths reported since September, five of which have occurred in the past seven weeks.

Aided by the cooperation of a witness, the investigation into last week’s shooting of Deverson Williams is “making good progress,” Mr. Matthews said, adding that following the shooting, two people were arrested after police executed a search warrant.

One was released from police custody, while the other, 29-year-old Jamaican Roget Simmon, was charged with carrying a firearm and illegal entry after police recovered a nine-millimetre handgun and ammunition from a Fahie Hill residence, according to a March 18 police press release.

However, the release added that police “are not connecting” the arrest and seizure to last week’s murder.

Of the eight deaths, only one has resulted in a suspect being charged for murder: Royden Sebastian is accused of shooting George Burrows to death on Sept. 2 in Free Bottom.

With no other arrests made in direct connection with the deaths, government officials are working to put more police on the streets and build the roster of officers to assist with ongoing investigations, particularly those concerning the drug trade.

“Presently, we do have a number of external officers on short-term contracts assisting with some of our investigations … and there’ll be a number of others who will be joining the force shortly,” Mr. Matthews said, though he did not disclose how many temporary recruits will be hired. Additionally, the force is “exploring specialist capabilities” to tackle drug-related crime, and looking to fill vacancies in its ranks and complete a territory-wide rollout of CCTV cameras, he said.

Police first installed CCTV cameras in neighbourhoods and police stations throughout the territory in 2013, but the systems sustained heavy damage during Hurricane Irma.

Officials at the press conference also acknowledged that much more must be done to combat the uptick in crime, with Mr. Rankin citing the more than $1 million from his office that he said has funded training and repairs to a patrol boat and the Road Town and Virgin Gorda police stations. “Security [for the territory] is my responsibility under the Constitution, and I do not shy away from that responsibility,” Mr. Rankin said, adding, “We must do everything we can to stop the violence affecting our communities and bring those responsible to account.”

In response to a question from this reporter, Mr. Rankin acknowledged that his office’s financial aid may not be an adequate response to the current violence, and said he and other members of the National Security Council must continue to “work on strategy and resource issues.”

Some of the crime-fighting resources that the governor intends to develop in the territory include establishing a system to link guns confiscated here to crimes in other countries; employing specialised officers from abroad; and strengthening the police’s powers to use DNA testing, he said.

The current laws around DNA sampling are strict, and they prevent the technique from being widely used here, Mr. Matthews said.

Under the Police Act, officers cannot hold a suspect for more than 24 hours or take a sample of their DNA unless they have been charged with a crime — stipulations that give the law fewer teeth than similar laws in other countries, including the United Kingdom, the commissioner explained.

“Even though we might think they are the prime number one suspect and we’ve got blood at the scene, … we can’t do anything about that if they say no,” Mr. Matthews said about collecting DNA.

“That’s a major, major problem for crime investigation to any law enforcement.”

For such reasons, Mr. Fahie said, residents must carefully consider the proposed Police Act that is currently up for public consultation.

“I’m appealing to the people of the Virgin Islands to come out and let us shape this legislation so that we can protect lives and livelihoods,” Mr. Fahie said.

The premier also said that residents must take better care of one another, and he urged any residents with friends or family members in danger of being sucked into criminal life to do everything they can to rescue them.

“If someone you love — a friend, a family member, someone in your household — is going [down] the wrong path, talk to them; urge them to stop and to think; remind them that they have children and loved ones who love them and who need them,” Mr. Fahie advised.

Just as the grizzly deaths in recent months have made headlines, so have some of the staggering drug busts, including the 2.3 tonnes of cocaine found in November that was the largest land-based cocaine seizure in UK history.

According to Mr. Matthews, the territory’s pandemic restrictions may have inadvertently led to these massive stockpiles.

Investigators tracking shipments of drugs from South America have found that instead of making their way to the United States and Europe as usual, shipments have been disappearing around the VI and other Caribbean countries, leading police to infer that travel restrictions may have led to a bottleneck of drugs in the VI and neighbouring islands, the commissioner explained.

While the flow of drugs through the territory is believed to be largely responsible for the recent uptick in crime, it is not the only criminal element in the VI that police are working to combat, according to Mr. Matthews.

The territory also saw several armed robberies over the past few months, he said, though he added that these were probably not linked to the drug trade but rather the result of individuals being able to purchase firearms.

In an effort focused specifically on taking guns off the streets, police at the end of February deployed four mobile and foot-patrol teams to cover commercial centres and cash-based businesses during their busiest hours, Mr. Matthews said.

This “Clean the Streets” initiative has reassured businesses and resulted in traffic charges and minor drug arrests, Mr. Matthews said, though he declined to say whether it has led to the confiscation of any firearms.

Since these patrols began in late February, police have confiscated 12 scooters and six other vehicles for being unlicensed or uninsured or having defective mufflers, and have issued tickets to 33 people for infractions such as not wearing a seatbelt, not wearing a helmet, or not having licence plates, police stated in a press release last Thursday.

Over the same time period, officers on these patrol teams have arrested four people for cannabis possession, Ms. Drayton said on Monday.

Seeking to reassure residents, Mr. Matthews said last Thursday that the police’s crime-fighting strategy actually led to a reduction in crime last year before the rash of suspected homicides started in September.

In the ensuing months, police have worked to target drug stashes and illegal firearms, which he said are the two main factors contributing to violent crime in the territory.

“That’s the work to do. We’re absolutely committed to continuing down that path.”

However, no matter how successful police may be, the territory’s safety cannot improve significantly unless residents collectively decide that they will no longer tolerate criminality in their community, and work with authorities to stop it, the commissioner said.

“Be angry that somebody feels that they can act with impunity and open up with an automatic weapon in our streets and kill someone and put everyone’s lives in danger,” Mr. Matthews advised.

“Be angry about that and be so angry that you start asking your own questions about who are these criminals? What are they doing in the territory? Why are we allowing them to stay?”