A stolen barrel of screws, doors that take a month to clear, and containers stacked five high. These were just a few of the problems customers reported encountering at the …

END_OF_DOCUMENT_TOKEN_TO_BE_REPLACED 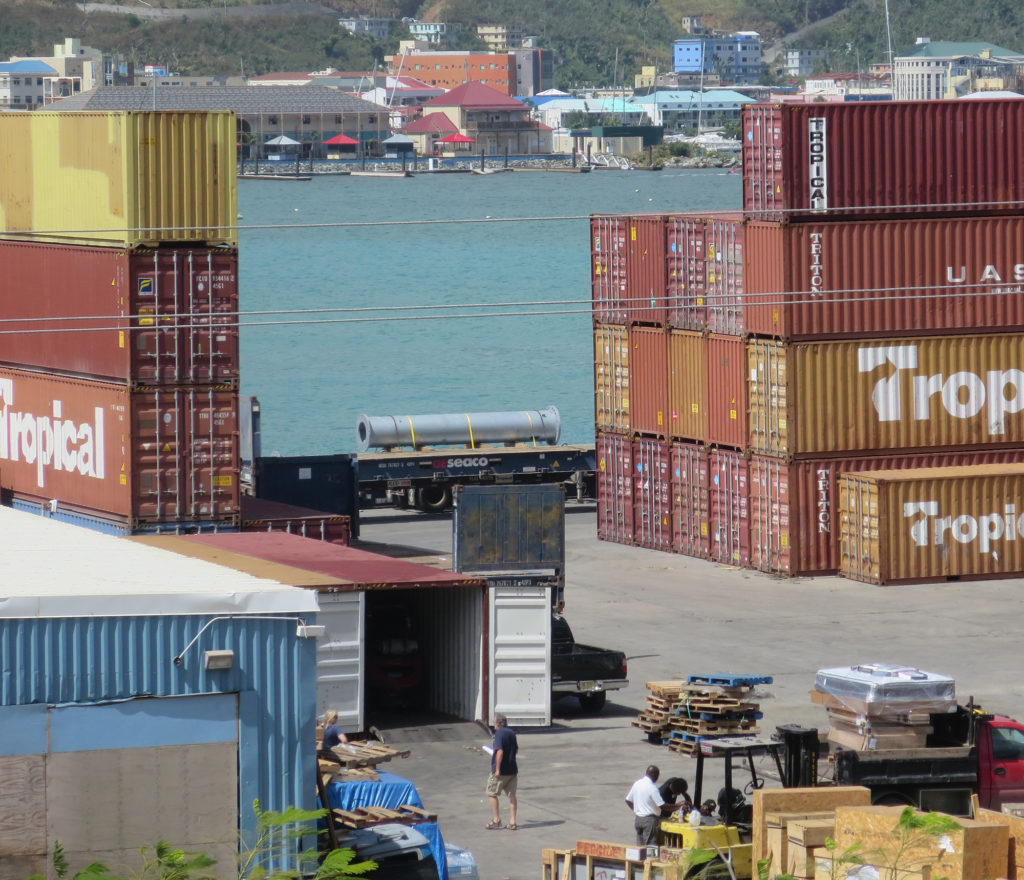 A stolen barrel of screws, doors that take a month to clear, and containers stacked five high. These were just a few of the problems customers reported encountering at the BVI Ports Authority in the months following Hurricane Irma.

Michael Thomas, owner of Clarence Thomas Limited, said in February that he has had as many as 20 containers at a time sitting in the ports since December. He got many of them off, but it was not easy.

Since Hurricane Irma hit in September, customers clamoured to get supplies to rebuild their homes and businesses by March 31 in order to beat the duty exemption deadline — which was originally announced in October and extended in December — for food, clothing, building supplies, vehicles and other non-luxury items.

The BVIPA has taken steps to alleviate some of the larger issues, and some customers have reported improvements. However, some promised fixes have not yet been delivered.

Akeem Pickering, operations manager at the BVIPA, acknowledged the flood of goods coming in and the difficulties getting them out, blaming “lack of space and the increase in cargo.”

“Initially, after the first month [after Hurricane Irma], it increased 300 percent,” he said.

“They have containers piled four or five high and eight deep,” he said. “They are roll-on-roll-off containers that come on chassis, and they take up a lot of space, so stuff just sits there. Tropical just can’t get to them.”

One resident, Kathy Wright, who was trying to import a set of doors for her home, said she waited four weeks from the time they arrived at the port until she actually received them.

“They [had] three containers buried among the tons of containers; my stuff [was] somewhere in the midst of them,” she said. “There is a rumour going around that they are waiting until the end of March so that they can charge duty.”

She also said she heard stories of people charged storage fees by the BVIPA even though they could not receive their shipments.

Mr. Pickering denied this claim, and explained that fees are determined on a case-by-case basis.

“If we find it’s the carrier’s fault — they cannot give the customer their container, so to speak, at the time — [we] encourage the customer to send the storage bill to their shipper, so they can have some sort of agreement as to who can pay the bill,” he said.

Mr. Pickering stressed that the BVIPA is working as hard as anyone to get things back to normal.

“We are working alongside Customs to see where we can make adjustments to speed up this process,” he said.

Many of the issues customers reported surround shipments of less than a container load — a designation known as LCL that is used to describe shipments of small freight not requiring the full capacity of a container, usually less than 20 cubic metres. This usually means different customers’ shipments are combined into one container.

On Nov. 1, the authority extended the hours of the Port Purcell facility in order to keep it open from 8:30 a.m. to 7:30 p.m. on weekdays and from 9 a.m. to 3 p.m. on Saturdays. However, Mr. Pickering also acknowledged that although employees haven’t taken a pay cut, some are working reduced hours. He is working with Customs to try to collaborate on other ideas to decrease the difficulties, he explained.

In addition, in November, the BVIPA opened a temporary lot in Free Bottom that will handle full containers, freeing up space at the Port Purcell location to better manage LCLs.

One prominent business owner, who declined to be identified, said that he has stopped shipping loose cargo altogether and started shipping by the full container load.

“Not everyone can afford it, but it’s faster and less stress because shipping loose cargo is a pain,” he said. “Some shipping compan[ies] here are one week to a month back[ed] up on loose cargo.”

“I think many persons have been experiencing inconveniences in the port situation we have been going through since the storm,” he said, adding that plans were in place to change the system for collecting LCL shipments.

Mr. Vanterpool also announced plans for a “temporary system where we can get the cargo out of the containers more quickly to you.”

The minister added that the problems at the ports were “very concerning” and that a “fairly comprehensive statement” would come in the next few days outlining further plans to resolve the situation. However, no comprehensive statement has been released, and attempts to contact officials at the ministry were not immediately successful.

Some ports customers also reported thefts, either by outsiders or employees.

One warehouse owner said, “There’s a hole in the fence they haven’t fixed yet. An entire barrel of screws was stolen by someone who walked through a fence.”

On Feb. 22, a ports employee pleaded guilty to stealing almost $5,000 worth of electronics intended for iSmart from the port warehouse, along with two other employees. They were arrested Dec. 5. The one who pleaded guilty was given an eight-month suspended sentence, and the other two await trial.

Mr. Pickering declined to discuss that incident or any other incidents of possible theft, or confirm whether the employees continued to work after their arrest.

Mr. Thomas reiterated that the plan for the future must contain ways to clear out excess material from the port.

“You have to clean up a little and get the junk off the port,” he said. “There’s so much freight and old containers and cars … that’s just sitting there.”

He added that Tropical Shipping needs additional space and that in order to make that space, the BVIPA needs to make better use of its resources.

“Get rid of [the BVI Fishing Complex]. We don’t need the fisheries right there. Expand the port all the way down there,” Mr. Thomas said. “Give Tropical the space they can work with.”

Lack of infrastructure is also an issue.

“We have a very small port,” Mr. Thomas said, “and we have to use it efficiently to move the containers off the port.”

He added that the space next to the port used to be a lumberyard, and suggested that the owners talk to the port about leasing the land to build a proper consolidated warehouse.

Denzil Clyne owns a car rental business in West End and said that his experiences at the ports have been mostly positive, but he knows of other business owners who have run into problems.

“I brought in a car last week. … It was very good,” he said. “The shipment I got from Orlando was a little more difficult: trailers that have been packed on top of other trailers so they can’t get goods out.”

All in all, though, he said he thinks the BVIPA is doing its best to cope.

“I don’t know the rules and laws,” Mr. Clyne continued. “But anything they’re going to be doing is best for the people. It’s been a rough time for everybody with the amount of things coming in.”

Sherry Smith was at the Port Purcell facility Tuesday to collect a shipment. She said she thinks some of the fixes have already improved the situation, adding that she is not a regular customer and only decided to ship some goods to take advantage of the duty exemption.

“Right after the hurricane, it was bad,” she said. “I was up and down to the other office [above Qwomar Pharmacy]. Up and down and up and down.”

She also blamed the duty exemption for people rushing to ship things into the territory and creating chaos — and she pointed out that it’s not all business owners.

“A lot of people shipping things in right now don’t know what they’re doing. They’re not professionals,” she said, pointing out that when they enter the BVIPA building, they don’t know which window to approach. “They end up going to wharfage and not the ports, [and] end up creating a lot more work for the employees.”

Ms. Smith said she thinks traffic at the ports will decrease after March 31.

However, one of the business owners who commented for this story said that the exemption period, which was already extended once in December, was too short.

“The rush is because of the exemption of duty free on some items,” he said. “But government need[s] to extend the exemption longer because it’s going to take years to rebuild the BVI. … And they, the government, only give the people six months to bring the exempted items.”

Tim Schaaf, a charter boat captain who spoke about the issues in January at a stakeholder meeting for the business community, agreed.

“The speed at which boats can be repaired here is slow, simply because of the lack of repair facilities,” he said. “Some parts take a long time to get here. Thank goodness we have another three months, but [the recovery] is going to go longer than that.”

“I think it’s a capacity issue and a logistics management issue that is at the forefront of what they’re trying to do in terms of improving efficiency,” he said. “They have some plans for how they’re going to try to improve the way they handle LCL cargoes and so forth.”

Mr. Penn added that the focus will be on improving the efficiency of cargo flow through the ports by better utilising the space available.

“I know, for example, that there’s an area outside the existing port that they’ve fenced that they’re going to try to re-process some cargo through there,” Mr. Penn explained.

Mr. Thomas said he has seen parts of the government’s plans, and believes “it will make a difference.”

“Once they start clearing the place up, I think it will work,” he said, but added, “Every week we are getting further and further behind. Before, it was an issue where we didn’t have enough containers, and now it’s an issue where we don’t have enough space. When people can’t get to their containers, it doesn’t just slow down business. It slows the whole recovery process.”