In an effort to fulfill a longstanding expansion plan, the BVI Ports Authority has purchased parcels of land in Virgin Gorda in order to separate cargo and passenger ports in …

END_OF_DOCUMENT_TOKEN_TO_BE_REPLACED 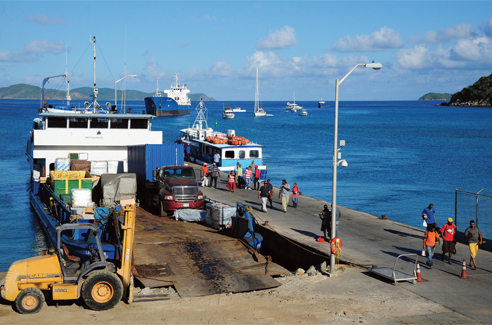 The BVI Ports Authority announced that it purchased parcels of land in Virgin Gorda in order to separate cargo and passenger ports. (File photo: TODD VANSICKLE)

In an effort to fulfill a longstanding expansion plan, the BVI Ports Authority has purchased parcels of land in Virgin Gorda in order to separate cargo and passenger ports in St. Thomas Bay, the agency announced Friday.

However, the BVIPA provided few details, and it hasn’t disclosed the price, the exact location, or the seller of the land.

A Friday press release announced an “investment in parcels … located in close proximity to the current St. Thomas Bay facility on Virgin Gorda.”

“The separation of these ports has been a part of the BVI Ports Authority’s expansion plans for an extended period of time,” the release stated.

It added that an appraisal was conducted by “one of the territory’s reputable appraisal companies,” and the BVIPA “moved forward based on information provided in the appraisal.”

The appraisal company was not identified, and no other details were provided. Meanwhile, BVIPA Public Relations Officer Akua Akindele said she was not able to respond to questions before the Beacon’s deadline yesterday afternoon.

Elected officials have long complained about safety concerns associated with using the same dock for passengers and cargo, and plans for a new facility have been in the works for more than a decade. In 2009, then-Premier Ralph O’Neal said an agreement had been reached with Little Dix Bay resort for land acquisition which would pave the way for construction for a second dock.

In 2011, the House of Assembly voted to buy from the resort more than 80,000 square feet of land — about 1.8 acres — in Machioneel Bottom, which is across St. Thomas Bay from the current dock. The following month, a declaration published in the Gazette announced the government’s intention to use the land for “a modern cargo and marine facility.”

In 2013, then-Communication and Works Minister Mark Vanterpool said his ministry would soon provide the public with “final development drawings” for the project.

Those drawings, however, never came.

The following year, the BVIPA told the Beacon that plans for the new dock were still in the works, but a source familiar with the project said government never purchased the land because it couldn’t agree on a price with the resort.

In 2016, then-Virgin Gorda representative Dr. Hubert O’Neal stated that the government planned to proceed with the expansion, keeping the cargo dock in Spanish Town while constructing a ferry terminal across the bay in Machioneel Bottom. The following year, he said he would still like to move forward with the project, but he confirmed that the land was never acquired. He cited price issues as the reason for the delay, saying Little Dix was asking for “$1 million an acre.”

On Friday, neither the BVIPA nor Ms. Akindele said whether or not the newly acquired parcels include the land initially sought in Manchioneel Bottom.