The government isn’t equipped to monitor both the Covid-19 vaccination rollout and a long-promised sea border reopening, which therefore has been pushed back another 45 days to April 15, the …

END_OF_DOCUMENT_TOKEN_TO_BE_REPLACED 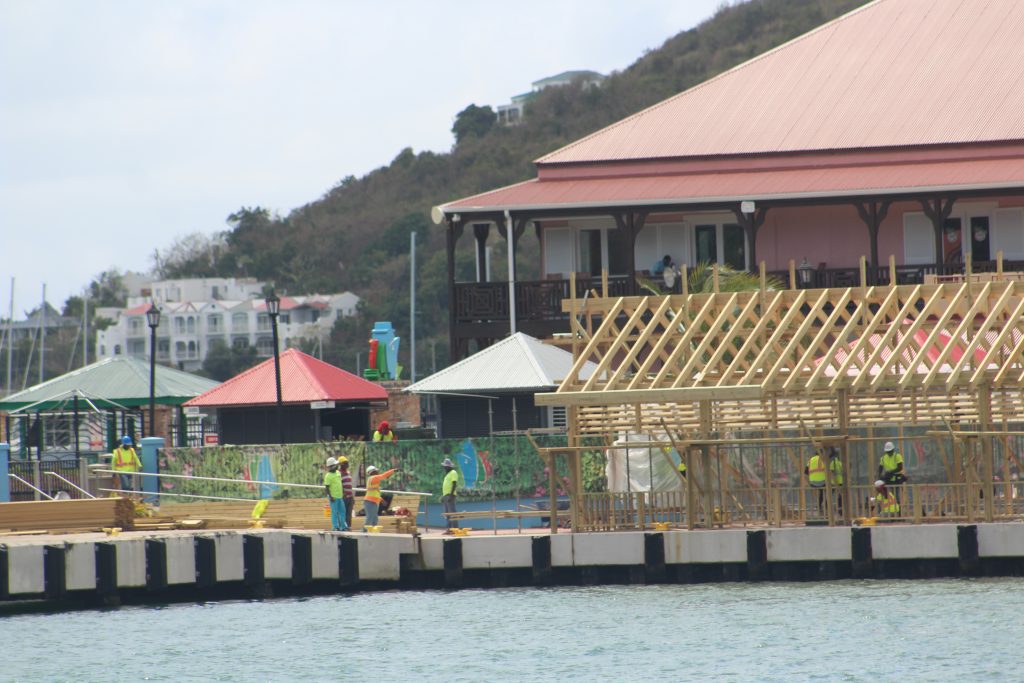 A facility is being constructed at the Cyril B. Romney Tortola Pier Park to accommodate domestic travel once seaports re-open to international tourists on April 15, officials said last week. (Photo: ZARRIN TASNIM AHMED)

The government isn’t equipped to monitor both the Covid-19 vaccination rollout and a long-promised sea border reopening, which therefore has been pushed back another 45 days to April 15, the BVI Ports Authority announced last Thursday.

The announcement — which marks the third extension of the border restriction — came four days before the territory’s ferry terminals were scheduled to start welcoming international travellers again.

As a result of the repeated delays, many prospective visitors have had to change their plans multiple times, resulting in a loss of business for the territory, according to tourism stakeholders.

“Hope is slowly dying along with our tourism economy. I think there were a lot of people optimistic the first and second time,” said BVI Chamber of Commerce and Hotel Association Executive Director Keiyia Jackson-George. “Cancellations are still happening, and people are just deciding to go elsewhere.”

Opposition Leader Marlon Penn also responded to the announcement, claiming that the government “lacks a clear plan for the reopening of the territory’s seaports” and noting a“lack of transparency.”

“To date, we have not received any updates or any information on the progress, processes and/or logistics of how the reopening of the ports will be managed, leaving us to infer that a reopening in the near future may not be forthcoming,” he wrote.

He added that the “constant false start of the reopening of our seaports … damages our global image.”

Mr. Penn and Ms. George urged government to provide a plan for tourism, as well as an economic recovery plan.

Premier Andrew Fahie promised a new tourism plan by the end of 2021 during a New Year’s Day message, explaining that it would be developed by a special committee headed by Junior Minister for Tourism Sharie de Castro.

Mr. Penn also asked that government provide updates on the seaport reopening in order to “aid business owners” in “how to operate their businesses within the coming week.”

The government has not disclosed the planned protocols for visitors arriving at the ferry terminals once they open, but the BVIPA has released two statements and a short video about the new date and some of the measures being taken.

“Due to the demands of the rollout of the vaccines and the need to ensure a large percent of the local population is vaccinated, the health personnel normally needed to assist in monitoring procedures at the entry portal is significantly stretched, and as such the efficiency to monitor the opening is challenged,” the BVIPA explained in a statement released last Thursday.

The agency issued another press release on Friday notifying the public that starting April 15 domestic ferry operations will be run through the Cyril B. Romney Tortola Pier Park and international travellers will arrive at the Road Town ferry terminal.

“We at the BVI Ports Authority understand that the current delay of the reopening has affected residents, visitors, business and the economy and deeply regret the necessity of the delay, but we are confident that this additional time will allow us to complete the project to ensure a safe and healthy return to service,” said BVIPA acting Managing Director Oleanvine Maynard.

“The BVIPA, and government agencies that operate at the ferry port, and our ferry partners must adjust their operations to ensure the safe resumption of international ferry transportation to our territory,” she said.

Preparatory work has begun at both ferry terminals, according to Ms. Chalwell.

During the announcement of the BVI Love campaign in September, the premier said that airports would reopen to tourism on Dec. 1 and seaports would open on Dec. 8. At the time, he repeatedly said, “We are ready.”

But when the time came, the sea border reopening was pushed back with a day’s notice. On Dec. 7, Mr. Fahie made a live announcement stating, “Given the number of persons that have been coming into the T.B. Lettsome Airport, which far exceeds our projection in this area, we see an opportunity to further strengthen our seaports to successfully balance lives and livelihood.”

A “target date” of Jan. 21 was announced the same day. Mr. Fahie went on to add that the main seaport was “still in need of further adjustments and physical improvements.”

Then, on Jan. 5 the BVIPA once again pushed back the reopening of the seaports until March 1. That release stated that the delay was due to health and safety concerns.