Local News > Potential coalition would be first in 33 years

Potential coalition would be first in 33 years

For the youngest voters in next week’s general election, a coalition government may be an unfamiliar concept. For their entire lives, Virgin Islands politics has been dominated by a two-party …

END_OF_DOCUMENT_TOKEN_TO_BE_REPLACED 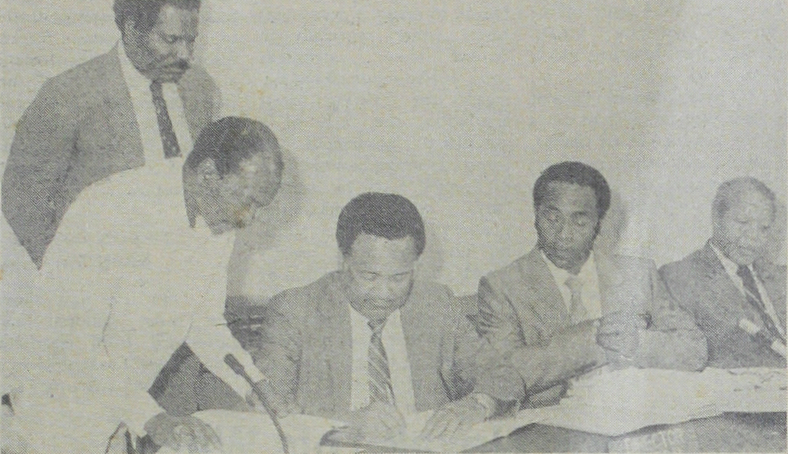 The most recent coalition government in the Virgin Islands was led by Chief Minister Cyril Romney, above, from 1983 to 1986. After that, the VI Party led the territory for 17 years before the National Democratic Party mounted a successful challenge, heralding the start of the two-party system. (FILE PHOTO)

For the youngest voters in next week’s general election, a coalition government may be an unfamiliar concept. For their entire lives, Virgin Islands politics has been dominated by a two-party system. After Monday, that could change.

“Very interesting times,” said Dr. Peter Clegg, a political science professor at the University of the West of England, Bristol, who studies the UK overseas territories. “In the UK [OTs] in the Caribbean, coalition governments are quite a novelty.”

In the VI, it’s been 33 years since a coalition led the territory. And since 1999, the Virgin Islands Party under Ralph O’Neal and the National Democratic Party under Premier Dr. Orlando Smith have traded power back and forth.

But Mr. O’Neal retired in 2015 and Dr. Smith is stepping down this week, leaving their parties fractured.

A majority of seven seats is needed to form a government. Currently, the VIP is the only party with a full slate of 13 candidates. The incumbent NDP has announced 11, the PVIM nine, and PU six.

Throw in two experienced independent candidates — former Deputy Premier Dancia Penn and Seventh District incumbent Dr. Kedrick Pickering — and the VI is facing the possibility of an election result it has seen only three times since the restoration of a locally elected Legislative Council in 1950.

Politically, the year 1971 had seen even more fundamental shakeups than 2019. Four years earlier a constitutional review had ushered in the ministerial system of government, and Chief Minister H. Lavity Stoutt recently had left the ruling United Party and its leader, Conrad Maduro, in order to form the VIP.

But it was the victory of another party — the VI Democratic Party — that led to the territory’s first coalition government.

The Legislative Council at the time had a total of seven seats. In order to form a government, a party needed four.

The VIDP, led by Dr. Q.W. Osborne, won three. For help, it turned to Willard Wheatley, who had just won his first election as an independent to represent the Sixth District. Mr. Wheatley became chief minister, relegating Mr. Stoutt to the opposition for the next eight years.

The next election, in 1975, saw more turmoil, with Mr. Wheatley firing Dr. Osborne, splitting from the VIDP, and rallying candidates for another coalition under the UP, even though that party won only two seats out of seven.

A VIP victory in 1979 led to one-party rule again until 1983, when independent Cyril Romney used a shrewd political manoeuvre to become the territory’s third chief minister.

After winning a seat on his third attempt, Mr. Romney (R- D5) formed a coalition government with the UP, narrowly defeating Mr. Stoutt and the VIP.

Apparently in exchange for Mr. Romney’s support, Mr. Wheatley, who was then leader of the opposition, agreed to step aside and let Mr. Romney lead the territory.

After the recent fracturing of the VIP and NDP left four parties heading into Monday’s election, some politicians and other residents have speculated that a coalition is likely once again. According to section 52 of the VI Constitution, the premier is appointed in one of two ways.

If a political party gains a majority of the seats, the governor appoints a premier recommended by a majority of representatives who are members of that party.

If no one fits the bill, the governor can call another general election. Dr. Clegg, however, believes that step would be unlikely.

“I think there would be great reluctance to go back to the polls,” he said. “What would change in two to three months?”

A new election wasn’t called in the Cayman Islands in 2017, when a political party that won seven of 19 seats in the Legislative Assembly fought it out with another party that won three, alongside nine successful independents.

Over six days, politicians collided in “high-stakes, cutthroat negotiations, forging and fracturing agreements and alliances,” according to a Cayman Compass editorial.

Voters watched as leaders of the two parties jockeyed to form coalitions either with the independents or with each other. Both leaders declared themselves premier at points — only to have the deals fall apart hours later.

The Cayman constitution contains a provision that the VI’s lacks: If a consensus is not reached by the meeting of the first Legislative Assembly, the government can be decided by secret ballot of all 19 members.

However, it did not come to that. The two party leaders eventually formed a workable majority, with the incumbent premier, Alden McLaughlin, remaining as head and the other party leader, McKeeva Bush, being named speaker.

“It took a number of attempts to do so, because it was difficult to get agreement amongst the large number of independents,” Dr. Clegg explained. “So for the BVI, with four parties competing, plus some independents, it really depends on how fragmented the vote is across the parties and candidates.”

Dr. Clegg said a coalition could be easier to achieve if one party wins significantly more seats than any other, so that fewer factions would have to agree.

“If the allocation of seats is more spread, then the role of personalities will become more important, possibly trumping any differences in policy,” he explained, adding, “Party politics and party affiliation may become more fluid.”

The 1971 and 1983 coalitions were formed under two strong independent candidates. Indeed, Messrs. Wheatley, Romney and O’Neal all began their careers as independents.

Ms. Penn, the only independent at-large candidate for Monday’s election, believes another strong independent could have a role to play in building the next VI government.

“We can’t forget our history,” she said. “The modern economy of this country was built on independent leaders.”

But since 1999, when the NDP’s arrival heralded the start of the two-party system, independents have fared poorly at the polls, with only one — long-time Second District representative Alvin Christopher — managing to win a seat.

And though new parties have cropped up nearly every year, they have struggled to gain a foothold.

This year — with four parties helmed by veteran leaders and two independents who could also command votes — candidates may be running with the intention of pulling off coups the way Messrs. Wheatley and Romney did years ago.

“People are running under party banners, but they are intending to join other people,” Ms. Penn alleged this month.

But Mr. Walwyn, the NDP chairman, has warned against a coalition, saying recently that VI voters do not “understand the inherent risks that face a country with coalition government.”

At a rally this week in Carrot Bay, he said a coalition works better in the opposition.

“As these different parties have nothing else in common to bind them together, original differences soon emerge once they get into government,” he said as he urged voters to choose only NDP candidates. “They haggle over the most basic issues and the coalition eventually falls apart.”

Mr. Fahie has expressed similar sentiments, while Mr. Skelton said he might consider an alliance and Mr. Fraser has declined to speculate.

Any post-election negotiations, then, could drag on. According to Dr. Clegg, it would be up to the media and the governor to work to preserve transparency and accountability in that case.

“There is a risk here that state/party resources might be used more aggressively” to win the support of members, he added.

However, he said, a coalition might not harm the territory.

“A more plural parliament may in the longer term improve the functioning of the House of Assembly,” Dr. Clegg explained. “Although if there are many independent [members], then any opposition might lack the necessary coherence to act effectively.”

A coalition, he added, also could affect the constitutional review that some leaders have championed.

“The party leaders seem to be in favour of further autonomy,” Dr. Clegg said. “But for that to happen, unity on this issue across party lines would have to be established after the election.”