Local News > Power lines to remain above ground for now

Power lines to remain above ground for now

In an effort to reconnect people to electricity throughout the territory as quickly as possible, government will rebuild the previous network of above-ground cable lines and poles before working to …

END_OF_DOCUMENT_TOKEN_TO_BE_REPLACED 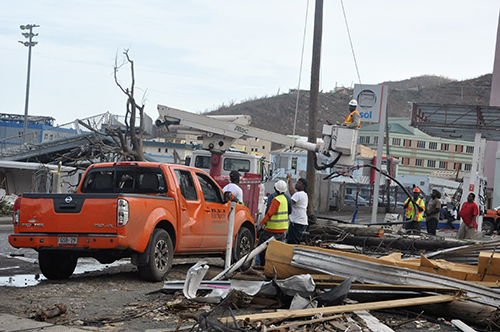 In an effort to reconnect people to electricity throughout the territory as quickly as possible, government will rebuild the previous network of above-ground cable lines and poles before working to expand any underground system, according to Communication and Works Minister Mark Vanterpool.

Underground lines are less vulnerable to wind damage and could make the electrical grid more resilient to hurricanes, though they are significantly more expensive to set up.

In a radio-broadcasted “town hall meeting” last night, Mr. Vanterpool (R-D4) was asked about the possibility of setting up such a system during Hurricane Irma’s recovery effort.

The minister, however, said the government is instead working to reestablish the above-ground network that existed before the hurricane.

“We are also working in tandem to look at an underground cable system in the near future,” he explained. “However, if we try to do that now to get power back to many homes it would take too long. So we’re going to rebuild the system as it was out of the central area. And then we’ve been looking at a plan to take the underground lines further out to be able to be more resilient to this type of weather.”

Mr. Vanterpool noted that an underground system was already functioning in the commercial and financial district of Road Town, which has allowed several banks and Peebles Hospital to quickly regain power after the storms.

At a press conference on Friday, he estimated power would be restored to the rest of territory’s most heavily populated areas within three to four months.

Whether underground lines are actually more hurricane durable is a point of contention.

Though they do not sustain wind damage, below-ground systems can suffer more harm from storm surge and flooding than their overhead counterparts, explained Dr. Ted Kury, director of energy studies at the University of Florida’s Public Utility Research Center, in an interview with NPR in 2011.

They also require more specialised knowledge to repair, which can extend the lengths of restoration periods after a catastrophe, according to a report that Quanta Technology — a utility infrastructure consulting company — prepared for Florida’s electric utilities.

The cost is also significantly higher: A 2011 report published by the Public Service Commission of Wisconsin stated that underground systems ranged between four to 14 times more expensive to construct than above ground networks of the same voltage and distance.