In a speech that acknowledged looming economic challenges but included various plans to boost public revenue without major tax hikes, Premier Andrew Fahie promised a $414 million budget in the …

END_OF_DOCUMENT_TOKEN_TO_BE_REPLACED 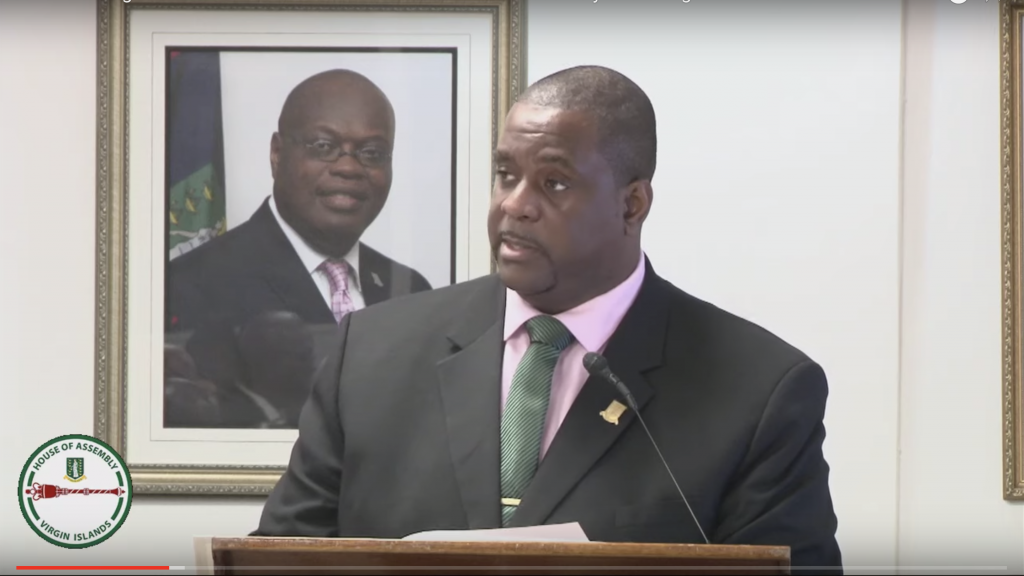 Premier Andrew Fahie said in his Budget Address on last month that the government would be going “back to basics”. (Photo: YOUTUBE)

In a speech that acknowledged looming economic challenges but included various plans to boost public revenue without major tax hikes, Premier Andrew Fahie promised a $414 million budget in the House of Assembly on Tuesday after introducing the Appropriation Act 2020.

“What you will recognise throughout this Budget Address is that it is about ‘back to basics,’” Mr. Fahie said. “It is about engaging and employing the strategies that our forefathers used to build the BVI.”

The address was his second since he was appointed premier following the February election, but the one he delivered in April — which he described as “transitional” — was rushed by a constitutional deadline, he said at the start of his Tuesday address before launching into a litany of criticisms of the previous government.

“Suffice it to say, we met a territory struggling to recover 18 months after being devastated by three back-to-back major catastrophes and with precious little done to help the people of the territory to get back on their feet, especially those who were most vulnerable,” he said.

Then he painted a picture of budget plans that he implied would rectify that situation.

Revenues of $362.9 million are anticipated, with about $201.4 million from financial services, Mr. Fahie said, though he did not explain how his government plans to address the apparent gap between revenue and expenditure.

Real gross domestic product growth is expected to range between one and three percent, he said, but even with steady growth the territory could face major challenges.

The premier warned, for example, that while the Caribbean Tourism Organisation has reported a 12 percent increase in arrivals to Caribbean destinations in the first quarter of 2019, the Virgin Islands is not measuring up to its regional neighbours in terms of attracting tourists, and the implementation of public registers of beneficial ownership by 2023 and related economic substance requirements are likely to hurt the financial service industry.

Already, he said, September figures showed a 27.9 percent decline in new incorporations and an 8.7 percent drop in public revenue from the Registry of Corporate Affairs. He added that this drop could also be due to the VI’s rate of recovery, uncertainty stemming from Brexit, an unstable global economy, and other factors.

However, he said higher-than-expected income from the hotel accommodation tax, a 32 percent collection increase from the environmental levy, proceeds from cruising permits, and taxes from international trade have helped cushion the blow.

He also pointed out that the International Maritime Organisation’s 2020 sulphur emissions regulations will increase the costs of shipping, raising the price of food, building materials and other imports for the VI. 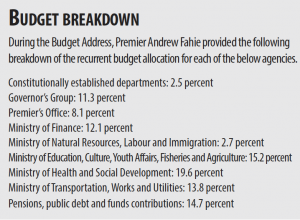 Nevertheless, the Ministry of Finance reported by the end of 2019 the GDP of the territory should reach $1.303 billion, an increase of between one and two percent from 2018, Mr. Fahie said.

He also estimated that $350.3 million of the $361.8 million budgeted revenues were realised, resulting in a projected recurrent surplus despite having to deposit $26.9 million to the Reserve Fund in 2019 to bring the territory into compliance with required ratios under the Protocols for Effective Financial Management.

Income taxes drew in $51.8 million, which Mr. Fahie said was $1.3 million more than projected in the 2019 budget and was a sign of employment growth and a recovering economy. He also stressed caution with respect to borrowing, in an apparent reference to the United Kingdom’s recovery loan guarantee offer, which he has been reluctant to accept.

“We must be mindful to the extent to which we allow ourselves to be leveraged, because it is us, the people of the Virgin Islands, who will have to repay any debts incurred,” he said. “Hence, our borrowing must be based on our ability to repay.”

Under a series of headings such as “Infrastructure,” “Transportation Logistics,” “Environmental Protection,” “Health Services,” and “Technology,” the speech also outlined some details of the government’s spending priorities.

To promote “green development,” Mr. Fahie said, the recently appointed Planning Authority board and other agencies will enforce building regulations “so that reckless construction practices do not continue.”

He also pointed to initiatives from the Ministry of Health and Social Development to clean up derelict vehicles and metal waste, to develop a comprehensive waste management plan, and to repair the Pockwood Pond incinerator and install a scrubber. He added that fines for disposing of household items like furniture, refrigerators and stoves at garbage collection outlets will be enforced.

Additionally, he outlined several legislative plans to address environmental issues in the territory, including a bill to address issues from oil discharge, a National Beach Use Policy, and a package of clean energy incentives like zero tax on solar and wind power and hybrid vehicles.

“I am advised that with serious effort, the BVI can be 60 percent green by 2030,” the premier said. “Technical details are being worked out.”

Part of the 2020 budget, he said, will go towards equipping the schools with furniture and equipment, replacing and upgrading internet access points and placing technological devices like Promethean Boards, digital tablets, and computers in every classroom at both primary and secondary levels.

He added that his administration will also begin rebuilding the Jost Van Dyke Primary School and the remaining buildings at Bregado Flax Educational Centre, and will complete designs for the Eslyn Henley Richez Learning Centre and for a new building to house the Elmore Stoutt High School students currently using the Clarence Thomas Limited building in Pasea.

Mr. Fahie went on to say that restoration works on the Central Administration Building are ongoing and that roof repairs and skylight replacements should be completed early in the first quarter of 2020.

As part of efforts to reduce congestion in Road Town, he said, government will construct multi-level parking facilities at the Festival Village Grounds and opposite the Dr. D. Orlando Smith Hospital, in addition to paid parking areas in central Road Town.

Furthermore, commuters will soon be encouraged to use a low-cost “around town” shuttle, while owners of properties in the area will be encouraged to build more multi-level parking facilities.

The premier also expressed his commitment towards improving hotel infrastructure, saying that the reconstruction of the hotel at Prospect Reef would take place during the current term of office, and that his government would ensure that applications for hotel aid tax relief are turned around within three months to accelerate its goal of a 5,000 room stock.

Regarding water infrastructure, Mr. Fahie said that government will invite expressions of interest in early 2020 to assess the VI’s water network, “inclusive of purchasing of water meters, upgrading the billing system, and addressing the leakages in the network.”

Meanwhile, he said government is also launching a National Sustainable Development Plan in partnership with a United Nations agency, the Economic Commission for Latin America and the Caribbean, to guide the territory’s development in the face of climate change.

In addition, he said, more than $12.4 million is appropriated to develop more resilient roads and infrastructure, more than $8.9 million to develop an integrated sewerage system throughout the territory, and more than $10.7 million to ensure that all VI residents can access potable water.

Mr. Fahie also outlined several plans for the future of transportation in the VI.

Though he did not take a clear stance on the airport expansion proposed by the previous government — which he said during the election campaigns should not be a priority — he hinted at a change of heart.

“To further increase airlift capacity and improve connectivity with the mainland USA, priority will be given to infrastructure development, built for resilience, to accommodate larger capacity aircraft at the airport,” he said. “This will facilitate the arrival and departure of larger capacity aircrafts, which are capable of bringing far greater numbers of visitors to our shores.”

He also said the BVI Airports Authority is in discussions with Caribbean Airlines Limited to add the VI to its route network, which the company hopes will happen in 2020. In addition, Silver Airways is set to begin operating its 48- and 72-seater ATR aircraft to the territory by April 2020, he added.

Government will also issue special visas to allow certain categories of visitors one-week stays to help fill hotel rooms, “particularly with persons with spending power,” according to the premier.

Such visitors will be able purchase their visas at the airport of their departure or within the territory, providing another revenue stream.

In addition, he said government is working to provide emergency airlift options for visitors in case of disaster, having identified vulnerability to hurricanes as a deterrent to visitors at certain times of the year.

“They worry about how they will get to safety if a hurricane threat arises,” explained Mr. Fahie. “But if we can assure our visitors that they will be guaranteed airlift capacity and an opportunity to get to safety, they will be more likely to visit our shores.”

The BVIAA will also switch to an international exchange system by March 2020 to print baggage tags and boarding passes, and will start air conditioning the arrival area of the Terrance B. Lettsome International Airport, he said. 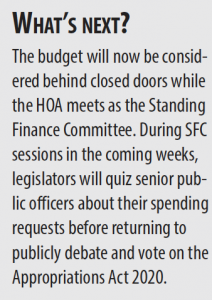 To increase cruise tourism, the premier called for more berthing opportunities and for the lands reclaimed outside of the Central Administration Building to be transferred to the BVI Ports Authority. In addition, he said, customs regulations will be amended soon to allow cruise ships to purchase duty-free fuel if they remain in the VI for three days or more.

Turning to agriculture, Mr. Fahie said that a land swap with the H. Lavity Stoutt Community College was facilitated to help establish a medical marijuana industry in the VI, a sector the territory is considering with the hope of generating millions of dollars in revenue.

As part of such efforts, government will try to restructure Crown land designated for farming, draft a national food production and land use policy, and modernise agricultural and fisheries legislation, he said.

To help support commercial farming and fishing companies, the administration is exploring the possibility of an agricultural and fishery curriculum at HLSCC, and is working on a programme to offer financial assistance to fish processing businesses of up to $100,000.

Meanwhile, to help cultivate the talent of VI residents, the premier announced, government is looking into educational programmes to award full bachelor’s and master’s degrees and other certifications in the VI from “internationally recognised, accredited universities through a distance-learning model.”

In addition, he said the Library Services Department will soon reopen its branches on Virgin Gorda, East End and Anegada with upgraded services and is looking to secure funding for a state-of-the-art library facility in Road Town.

To strengthen the territory’s border enforcement, Mr. Fahie announced that the VI is “well on the way” to signing a contract with a Canadian company for a border management system. This signing should be completed by the end of the month, with works set to begin in 2020 and completion expected in early 2021.

To help take care of the territory’s elderly residents, the 2020 budget will provide funding to restore the Senior Citizens Programme throughout the territory and expand the Adina Donovan Home for the Elderly to provide long-term nursing care to additional clients from its existing location, Mr. Fahie said.

In the Ministry of Health and Social Development, $2.7 million, or four percent of the development vote, is also being allocated to ongoing work at the Nurse Iris O’Neal Clinic on Virgin Gorda, which Mr. Fahie said is expected to open early next year, as well as remedial work on the community centres and clinics throughout the VI.

Additionally, the premier announced, the government requested $2.5 million from the Caribbean Development Bank to be placed in a fund to help develop entrepreneurs in the territory.

Attempts to reach Opposition Leader Marlon Penn for a response to the Budget Address were unsuccessful.