Premier backs down on 15-year-belongership plan

END_OF_DOCUMENT_TOKEN_TO_BE_REPLACED 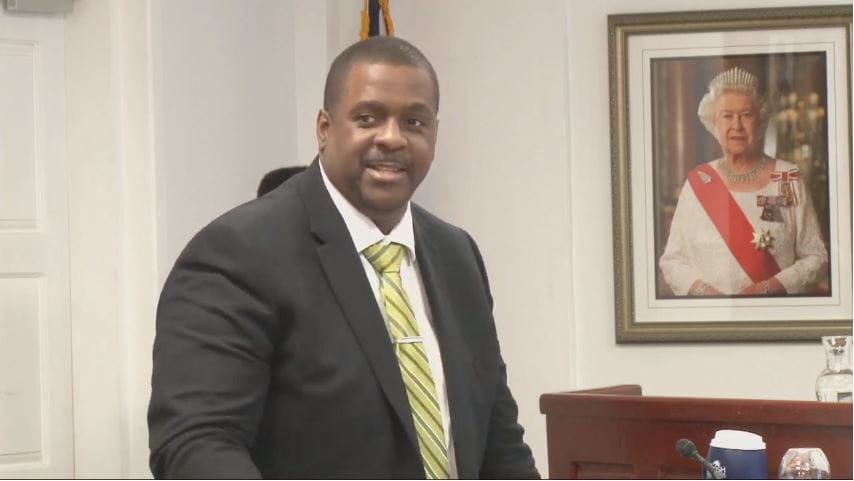 Premier Andrew Fahie (R-D1) speaks in support of the amendment to the Immigration and Passport act Monday in the House of Assembly. (Photo: FACEBOOK)

The House of Assembly on Monday passed the controversial amendment to the Immigration and Passport Act that was meant to allow Premier Andrew Fahie to enact the “Clear Path to Regularisation” initiative he announced nearly a month ago.

Originally, the plan would have allowed for expatriates living in the territory 15 years or more to apply, pay increased fees and be approved for residency and belongership within weeks, while at the same time clearing the backlog of hundreds of applicants still waiting for a decision after applying previously.

That plan, however, will be dialed back considerably after an uproar from a group of Virgin Islanders who called it “illegal” and “flawed” and
complained that their opinions had not been taken into consideration.

Many of them called for the comprehensive immigration and labour reforms promised in the Virgin Islands Party’s 2019 manifesto instead of a fast-track plan that the premier seemed eager to rush through the HOA.

This week, they appeared to score a victory on that front.

“Initially, we had envisaged considering people who were here for 15 years or more. But coming from the consultation, and having listened to you, the people, we have lifted that ceiling for consideration to 20 years,” Mr. Fahie said in a statement released on Sunday, adding that the modified “fast-track” includes both those who have already applied for residency and those who have yet to apply. “The initiative on the order paper speaks to the amendment to the Immigration and Passport Act that allows for Cabinet to have a say in a process that effectively deals with the backlog.”

He added that the amendment — which passed on Monday with four of five opposition members absent and limited debate — is but the first stage toward the comprehensive immigration reform that he said previous governments had “sidestepped.”

In the version of the bill Gazetted last week, the changes most pertinent to the fast-track plan applied to sections 16 and 18, which address belongership and residency, appearing to loosen requirements and broaden Cabinet’s powers to grant both.

Also part of this new “phase one,” Mr. Fahie said that after Monday, the Immigration Department would be clearing the backlog of what the agency estimated to be fewer than 800 applicants who have already applied for resi- dency and/or belongership, which “makes the coming reform easier.”

“These reforms cannot be embarked upon with this backlog hanging over the territory’s head as it can compromise the smooth implementation of the reform programme that will be in the hands of you, the people,” he
said, going on to explain that the reforms will include adopting new immigration monitoring software, stricter policies for work permit renewals, taxes and a crackdown on fraudulent sponsoring of new work permits. “These are being looked at, and the loopholes will be blocked.”

In the coming weeks, he said, public discussions will continue.

“We will be putting online all the draft policies for persons to review and I’m asking all Virgin Islanders to come out to the public meetings,” he said.

He also urged people to prepare for a window of about three months for dialogue to take place before we “bring it all back together and shape the new policy … and the necessary amendments for the act. This is not a one-step dance.”

In his statement, he explained that the planned reform programme is aimed at “closing the floodgates that currently exist and which have, in some regards, compromised the interests of BVIslanders, leading to the fears that were raised during the consultation process.”

The postponement of the original programme — which had been scheduled to begin last week — has left potential applicants waiting, paperwork in hand, for instructions that may not ever arrive. More than 1,000 people have applied for the required police reports since the plan was announced, according to police.
The premier has said the initiative would grant status to those longtime residents who have contributed and built up the community, and “restore the dignity of hundreds and establish a foundation for em- powerment and unity.”

In order to enact it, he moved to rush the amendment to the Immigration and Passport Act through the House of Assembly during its May 17 sitting.

However, almost immediately, heated debates erupted on social media, and a petition that had garnered 122 signatures as of Tuesday resulted in two “listening town hall meetings,” where dozens of people spoke publicly for and against the programme, and on general issues concerning foreigners in the territory. The premier on Monday called it “the most discussed issue in the history of the Virgin Islands in the shortest period of time.”

Grumbling began last week among opposition members, who claimed that they, too, had been shut out of the decision-making process, and questioned the motives behind the legislation. During the question-and-answer session in the Monday HOA meeting, Opposition Leader Marlon Penn (R-D8) bickered with the premier about who was responsible for cancelling two scheduled meetings.

“I’ve been more than accommodating to the opposition to have a meeting; both of them were cancelled by the request of the leader of the opposition,” Mr. Fahie said.

Mr. Penn, meanwhile, claimed the first meeting was cancelled because several opposition members were not available, and he subsequently was unable to arrange another meeting time that would work for both sides. His primary issue, however, was that the opposition wasn’t consulted about the amendments.

“I believe the premier, the leader of government business, could have brought this to us to have a discussion before,” he said.

Ultimately, all opposition members were absent for the vote except Alvera Maduro-Caines (R-D6), who questioned the raised fees, whether the Immigration Board would continue to play a role in granting status, and whether the HOA needed to be in- volved at all, among other things. She, too, called for more comprehensive reforms.
“What we are doing here is a patchwork,” she said. “Yes, I understand immigration and labour reform needs to be made; sit down and get it done correctly.”

In another statement released Tuesday, the premier slammed the opposition for bailing on the debate, which he described as childish behaviour.

“For the opposition to withhold making any meaningful contribution to the de-bate on the bill, and for them to pack up and leave because the proceedings did not seem to be going in their favour, is puerile and an abdication of their responsibility to the belongers who voted for them in the general elections,” he said.

The changes most pertinent to the fast-track plan apply to sections 16 and 18, which address belongership and residency.

Last month, Cabinet appointed a new Immigration Board for a two-year term, as prescribed in the then-current act. The previous board’s terms had expired last month. The amendment, as it was published in the Gazette last week, would not change the role of the board, which Cabinet is required to consult before granting residency or belongership.

While the premier, in his Sunday statement, praised those who spoke up to offer feedback, he also acknowledged that not everyone would be “fully satisfied.”

“But we are pleased that we have adjusted course, and found common ground that is in the best interest of every Virgin Islander,” he said.

Also on Monday, Mr. Fahie announced an amendment that would create a six-week window, to be announced later, in which “third-generation” Virgin Islanders living abroad could come and apply for belongership.