Premier calls for reparations from UK

END_OF_DOCUMENT_TOKEN_TO_BE_REPLACED 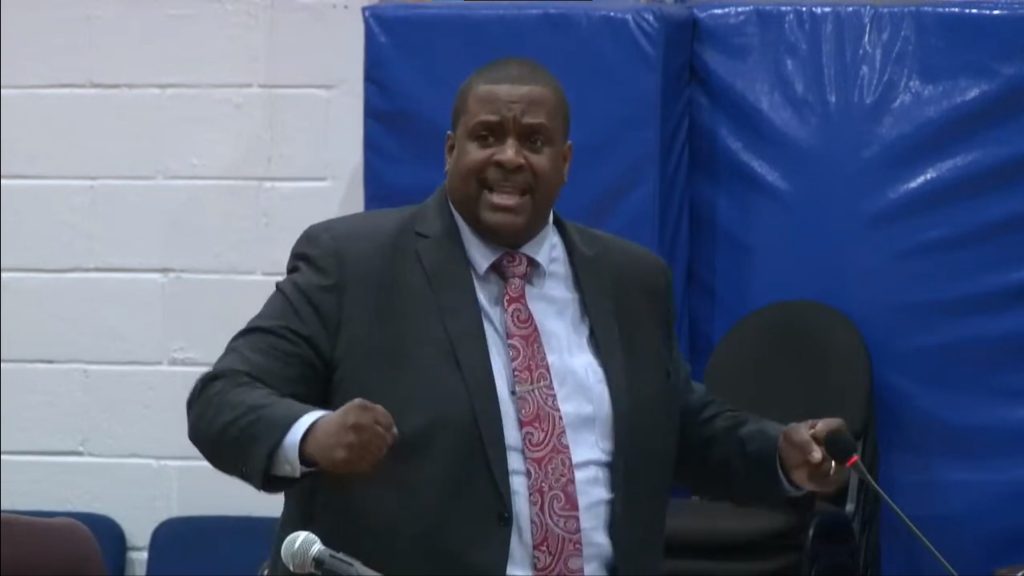 Last week in the House of Assembly, Premier Andrew Fahie lent his support to the Caribbean Community’s call to secure reparations for the descendants of enslaved people in the region. (Screenshot: HOUSE OF ASSEMBLY)

Five years after the United Kingdom finished paying off a longstanding debt that funded reparations to slave owners for loss of income following the abolition of slavery in the early 1800s, Premier Andrew Fahie has added his voice to growing calls for the UK now to pay reparations to benefit the descendants of those who were enslaved.

Renewed discussions of reparations began in the territory after Governor Gus Jaspert explained the UK’s longstanding position on the issue during a Sept. 7 interview with 284 Media: The UK has not committed to paying reparations even though it recognises the harm caused by the “horrific period” of the trans-Atlantic slave trade, he said.

“Highlighted by events in the US about tackling racism — and all forms of racism — it is an important reminder that we should never stop thinking about what are we doing and how do we ensure we are actively breaking down any racism,” Mr. Jaspert explained. “In terms specifically of reparations as you talked about, I know that’s put forward a lot. That’s not a position that the United Kingdom has taken.”

The UK position was not new, but Mr. Fahie was angered by the interview, he said on Sept. 29 in the House of Assembly.

“A statement from the governor, especially one that is identified as reflective of official UK government policy, will inform the perception of how the UK views the BVI and its people,” he said, adding that “large segments of the local population” responded negatively to Mr. Jaspert’s comments.

In response, Mr. Fahie said, he wrote on Sept. 14 to Baroness Liz Sugg, the UK’s minister for overseas territories and sustainable development, “drawing to her attention the governor’s interview and the sentiments that members of the public have expressed, particularly with respect to the issue of reparations.”

In the letter, the premier asked for confirmation of the UK’s official position on reparations. The baroness, he said, responded that she fully supported the governor’s position that there is a need to continue tackling and challenging injustice.

“The British government expresses deep regret for this country’s past role in the trans-Atlantic slave trade,” according to Ms. Sugg’s Sept. 18 response, which Mr. Fahie read out in the HOA. “We recognise fully the strong sense of injustice and the legacy of slavery still felt in the most affected parts of the world. We feel that the most effective way for Britons today to respond is to ensure that future generations do not forget what happened and to work to ensure that slavery has no place in today’s world.”

She did not detail any plans for paying reparations.

Last week in the HOA, Mr. Fahie criticised the response.

“It is clear that the UK believes a statement of regret is sufficient to deliver closure to the descendants of slaves, and that reparations do not form part of the UK government’s official policy,” he said. “To say that this is disappointing is an understatement, and I have since so advised [Ms. Sugg].”

The premier said it is necessary to consider the issue from the perspective of Virgin Islanders in order to understand the full context of its sensitivity and relevance in current times.

“One must look at it through the lens of a Virgin Islander whose foreparents were the victims of the atrocities committed during the period when slavery was allowed and supported by the British empire,” he said.

The premier highlighted the importance of pursuing equality in the 21st Century, considering the long-term ramifications of the centuries of slavery.

“Many of the wealthy Britons whose descendants still benefit from and enjoy this wealth amassed fortunes from the slave trade and the use of slave labour,” Mr. Fahie said.

In 1833, the UK went into debt to pay £20 million, 40 percent of the government’s income at the time, to compensate slave owners.

“The UK saw no problem with carrying that enormous debt for 182 years, having only repaid it in 2015,” he continued. “Again, not a cent was given to the descendants of the slaves, but to the persons who had us enslaved.”

Mr. Fahie said it is time to also pursue reparations on a local level, starting with the renaming of channels and roads in the territory named after slave owners and pirates, including the Sir Francis Drake Channel.

Mr. Fahie added that his government fully supports the Caribbean Community’s recent efforts to secure reparations in pursuit of greater independence for the regional countries it represents.

In 2013, Caricom formed its Reparations Commission, a regional body with the goal of making the moral, ethical and legal case for payment of reparations by governments of former colonial powers to Caribbean communities.

This July, the commission launched a new effort to unite representatives in Caribbean governments, European governments, private corporations, universities, and civil society organisations to solidify plans for reparations in the Caribbean.

CRC Chair Sir Hilary Beckles said at the time, “Apologies are not enough.

Apologies are precursors for reparations. … Apologies are stage one of an effort that says we acknowledge the harm we have caused and we are prepared to enter phase two, which is a discussion and negotiations about how to repair that harm and that suffering that continues to be the legacy of slavery in the Caribbean today.”

Caricom promotes a 10-point plan for pursuing international reconciliation in the wake of chattel slavery.

“Victims and their descendants have a duty to call for reparatory justice,” the plan asserts. “Their call for justice is the basis of the closure they seek to the terrible tragedies that engulfed humanity during modernity.”

Reparations can extend beyond financial compensation, according to the organisation.

The elements of Caricom’s plan include full formal apologies from governments; repatriation to account for the forced migration of those involved in the trans-Atlantic slave trade; programmes to aid in the development of indigenous communities decimated by genocide and land appropriation; investments in cultural institutions such as museums and research centres; aid for public health crises such as chronic illness; the eradication of illiteracy; support for programmes concerning knowledge of African culture; psychological rehabilitation; the transfer of technology; and debt cancellation.