Inquiry > Premier, COI contradict each other on hearings

Premier, COI contradict each other on hearings

Premier Andrew Fahie said again on May 20 that he believes all hearings before the Commission of Inquiry should be broadcast live for transparency’s sake, but the COI responded the …

END_OF_DOCUMENT_TOKEN_TO_BE_REPLACED 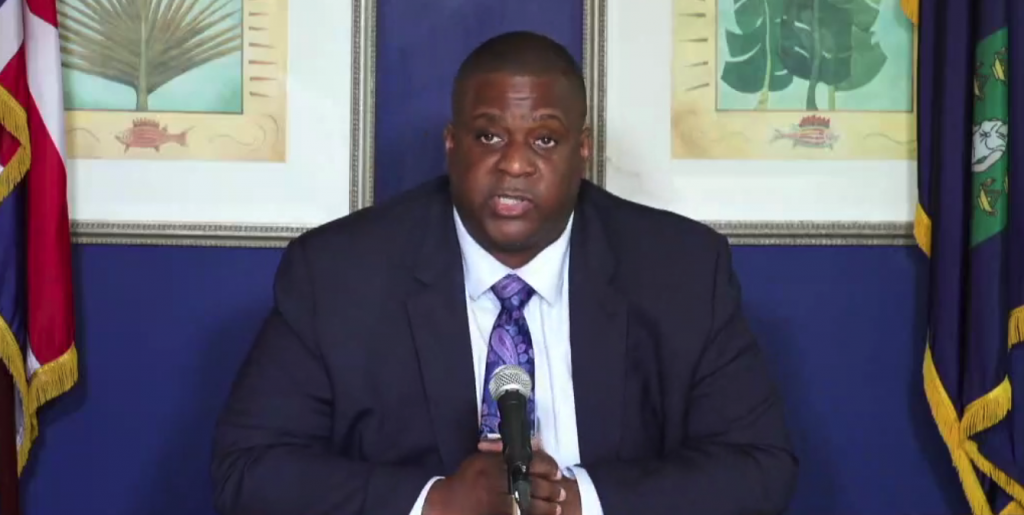 Premier Andrew Fahie answers media questions during the press conference on May 20 about the commission of inquiry and other issues. (Screenshot: GIS)

Premier Andrew Fahie said again on May 20 that he believes all hearings before the Commission of Inquiry should be broadcast live for transparency’s sake, but the COI responded the next day to say that the proceedings have been held in private in recent weeks at the request of lawyers representing the premier and other ministers.

Mr. Fahie stated that beyond a few clerical errors — like only scanning one side of a double-sided paper — government had furnished whatever information the COI team requested.

All told, he said, public officers have forwarded some 85,000 pages of records from offices and elected officials of current and past administrations.

“It is a sizeable volume of documentation and it has been provided in good faith,” Mr. Fahie said. “Wherever there may be any anomalies or shortcomings due to human or machine error in reproduction of photocopies or labelling, your government remains committed to rectifying these promptly.”

However, the COI told a different story in a press release issued on May 21, stating that documents disclosed by public officials so far weren’t up to snuff.

“The initial hearings were rendered necessary because the documents which have been disclosed by public officials appeared to be substantially incomplete and in very poor order, such that, in some cases, it was difficult or impossible to ascertain anything useful from them,” the commission said in the press release.

Commissioner Sir Gary Hickinbottom said Attorney General Dawn Smith requested on behalf of the premier and other ministers that the hearings involving the documents be held privately to respect their right to confidentiality. The commission, however, has issued verbatim transcripts of several of the hearings so far.

Also on May 20, Mr. Fahie addressed several aspects of the inquiry and gave a summary of some of the topics addressed when he appeared in his capacity as premier for a hearing on May 18.

That hearing was not broadcast live, and the transcript was not published before the Beacon’s deadline on May 26.

Mr. Fahie said the subjects covered in his hearing were wide ranging and included the company that provided barges for border control during the pandemic; other people questioned in the hearings such as Claude Skelton-Cline, Patsy Lake and Bevis Sylvester; and other programmes and projects.

He consented to return for any future questions, he added.

Regarding the testimony process, Mr. Fahie echoed sentiments shared by government lawyer Sir Geoffrey Cox on May 13, requesting advance notice of the subjects of the hearings. According to the transcripts, witnesses are provided with packets of information disclosed to the commission to reference.

“My first-hand observation is that transparency, efficiency and effectiveness can be enhanced if persons summoned to appear before the commission are advised of what subject they will be questioned on, so that they can ensure they are prepared and they walk with the correct supporting documents and so forth,” the premier explained.

In recent months, Mr. Fahie has repeatedly requested that the inquiry be conducted as transparently as possible.

“It is common practice in many jurisdictions for hearings in commissions of inquiry to be broadcast live,” Mr. Fahie said in January when the inquiry was first announced. “This aids the public in having accurate information and in seeing that the inquiry is conducted in a transparent manner with no secrets or hidden agendas.”

Mr. Fahie then pointed to the Commissions of Inquiry Act 1880, which directs that inquiries should be held in public unless “there is any contrary direction.” Ultimately, however, it is up to the commissioner to decide how the inquiry is conducted.

In the May 21 press release, Sir Gary said he likely would continue to respect the wishes of elected officials who wanted the hearings to be private, especially when involving confidential documents. But he also said the commission would continue to publish transcripts of the hearings, only redacting passages requested by the attorney general.

The hearings are temporarily on hold until the end of the month to give officials time to provide more documents and answer specific questions about governance in the territory in their “position statements,” according to the statement.

“The invitation to provide a position statement allows those given the right to participate in the COI, and others with a special interest in the subjects under inquiry, a proper opportunity to set out before the hearings take place those matters which they say should inform the work of the COI,” Sir Gary said.

People invited to submit such a statement include HOA members, Governor John Rankin and others.

Sir Gary also set a deadline of May 31 for ministers and others who got “letters of request” for evidence to swear affidavits that they disclosed everything. Ms. Smith must also confirm that all reasonable steps were taken to fulfil the requests.

Once the hearings resume, it is Sir Gary’s “intention that all future hearings will be live streamed,” according to the statement.

Also during the press conference, Mr. Fahie responded to a question about government contracts with consultant and radio host Claude Skelton-Cline, which this newspaper has been unable to obtain in spite of multiple requests going back more than two years.

“No government contract should be private,” Mr. Fahie responded, adding that he would check to see if the documents are available.

At the conclusion of Mr. Skelton-Cline’s hearing on May 11, during which the commission asked him to provide documentation of his government contracts, the consultant asked if the team was unable to get them from specific government agencies.

Sir Gary didn’t directly answer, but he responded that it’s within the COI’s prerogative to request any documents, even duplicates.

“The real answer is that the government can’t give all of those documents because some of your documents will be internal documents,” Sir Gary said in the transcript published on May 25.