“How much money do we allow for Covid-19?” Premier Andrew Fahie asked last Thursday during a press conference. “That, no one can answer. How much are we going to put …

END_OF_DOCUMENT_TOKEN_TO_BE_REPLACED 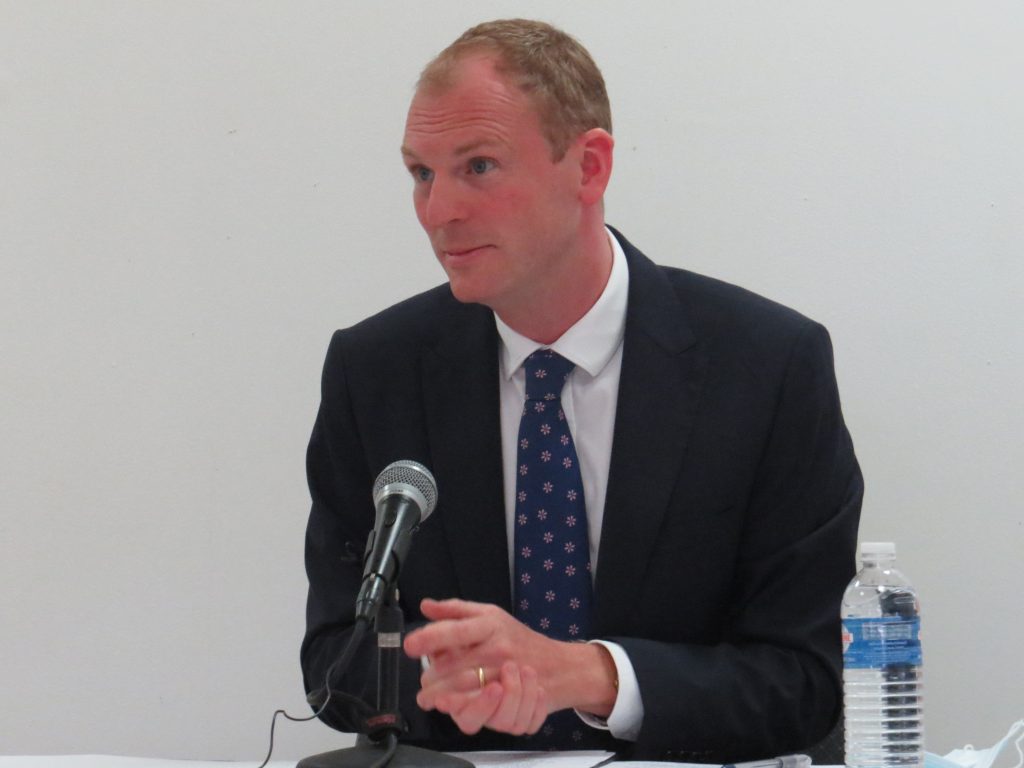 As the Virgin Islands passes the two-month mark since its first cases of Covid-19 were confirmed and the community prepares for what is likely to be a summer without tourists, government is preparing to announce today what measures it will take to support economic activity.

A big part of the discussion leading up to that long-promised announcement is how the VI approaches borrowing and spending money.

Mr. Fahie has argued that the Protocols for Effective Financial Management, a 2012 agreement between the VI and United Kingdom, represent a major stumbling block as the government tries to devise an economic stimulus package to help the territory’s people through the pandemic.

But during a separate press conference last Thursday morning, Governor Gus Jaspert reaffirmed his opposing view, and he has said recently that the territory is in a good position to dip into its healthy reserve fund or borrow if needed to fund stimulus measures.

“I have not seen any evidence to indicate that [the Protocols] hamper the government’s ability to bring forward an economic package for the people,” Mr. Jaspert said, adding, “The Protocols have the sole purpose of ensuring sensible management of public finance and accountability to the public.”

Mr. Fahie promised later that afternoon to bring forward an economic plan by today, though he reiterated that the borrowing ratios required by the Protocols have been a sticking point.

“If it calls for major cuts to get that percentage — whether it be 60 million, a 100 million — then we have to look at the greatest expenditures we have in government that we can cut to meet what the conditions are because we dipped below what was allowed,” he said, expressing particular concern for public officers. “That would mean that we would have to send hundreds of people home without a job. That means that we would have to make some very harsh decisions to affect a lot of families.”

Still, he said it is necessary for the territory to move forward with a phased economic stimulus.

“Your government understands the hardship our people are facing during this time, and as promised we will continue to address the major essential needs of our people and local businesses as much as possible and within the limits of our means as a territory,” Mr. Fahie explained.

At a time when countries around the world are experiencing economic instability, Mr. Jaspert said the Protocols send a clear message to residents, potential lenders, and international partners that the VI is committed to borrowing and spending public funds sensibly.

Addressing criticism that the rules are hampering efforts to provide financial relief to those in need during emergencies like the Covid19 pandemic, Mr. Jaspert said the rules do come with some flexibility.

He pointed to past instances where the VI “needed to borrow large amounts in exceptional circumstances,” which both governments allowed. Currently, however, the territory is in compliance with the borrowing ratios required by the Protocols, and it has been since last year, according to the governor, in spite of a years-long breach before that.

One of the Protocols’ goals is to maintain certain ratios of government’s liquid assets.

By having at least 25 percent of its assets as on-hand cash, for instance, the VI can more easily respond to unexpected disasters.

“Our government has done well to keep that,” the governor said.

Another key ratio is how much debt the territory takes on relative to the overall budget — no more than 10 percent under the Protocols.

Government needs to be able to pay public servants and other obligations without being overwhelmed by having to pay back other debts, Mr. Jaspert explained.

Rules about the VI’s net debt also prevent overburdening future generations that will eventually have to pay it back, according to the governor. The net debt can’t be more than 80 percent of the recurrent revenue under the Protocols.

The agreement, he added, takes into account that the VI is located in an area where multiple disasters can strike, such as hurricanes, floods, earthquakes and now a pandemic.

“In the Protocols, there’s what’s called the ability for a ‘transition period,” he said, adding, “The Protocols include, and it has been used in the past, the ability for the government of the BVI to say, ‘Can we have a period where we have to use our reserves more and not have as much cash balance?’ As an individual, you’d say, ‘Times are tough and I need to spend what’s in my bank, or to take on more borrowing.’”

In such instances, he said, the territory can draw on its cash reserves more than usual or take on more borrowing.

If such actions mean breaching the Protocols’ borrowing guidelines, he explained, the UK government would simply want reassurance of a plan to pay back the territory’s debts, rebuild reserves and get back to the status quo.

The Protocols do, however, also grant the UK greater oversight over the territory’s financial decisions when it is in breach of the Protocols — a fact that appears to be a sticking point for the premier.

Mr. Fahie said on May 19 that government has been trying since last year to renegotiate the agreement.

“There are persons who are saying the Protocols are not impediments to the BVI raising and spending money,” he said. “But you have to keep in mind that those persons have their own agenda, and for the most part are not mutually aligned with the purpose of the people of the Virgin Islands.”

On April 16, he added, government petitioned the UK secretary of state to ease the Protocols’ restrictions.

As the VI plans its long-term approach to maintaining a functional economy, eyes have turned toward the Reserve Fund.

The territory’s reserves are in a “very healthy position,” the governor said, at $80 million as of last year’s budget estimates.

In an interview this month, he suggested drawing on the reserves to support an economic stimulus package, saying that concerns about the Protocols shouldn’t hamper such spending.

But Mr. Fahie gave a reminder last Thursday that catastrophic events can strike with little warning, and it is important to not draw too heavily on the reserves ahead of what is predicted to be a particularly active hurricane season.

“This is why we must make sure that we move in phases and not in huge chunks with our economic stimulus response, so that our resources can be stretched to allow us to address our needs as we continue to exercise the highest degree of control over the affairs of this territory,” he said.

The premier has argued that previous steps taken by the government in response to the pandemic constitute the first phase of an economic stimulus package, including more than $12 million spent thus far on test kits, respirators, medical supplies, quarantine space construction and public awareness campaigns; $2 million spent on food, medication and other essentials for seniors and others in need; $2 million allocated for a fishing and farming programme; and $800,000 allocated for a curb-side trash pickup during the recent lockdown.

However, Mr. Fahie said he is concerned about spending too much too quickly from the reserves, especially when the territory could still be penalised for breaking the terms of the Protocols.

“There is money in the reserve, and we can spend up to a certain level,” Mr. Fahie said.

But he said according to calculations done during the past 15 months of Protocols negotiations, government found a ceiling of $110 million it could spend — given the $414 million budget the House of Assembly approved in December — without running afoul of the required ratios.

Mr. Fahie added that there is still too much ambiguity about what undefined financial “measures and mechanisms” the UK could implement if the VI violates the Protocols.

Because of the lack of clarity on the consequences, Mr. Fahie also worried about how the debt-to-income ratios could change if the VI breaches the Protocols.

Essentially, the VI could spend too much from the reserve, breaching the borrowing guidelines once during an emergency, and then it could be hit with more restrictive spending measures in the future, he said.

The premier added that government would continue to defend the stance that certain conditions in the Protocols — specifically Sections 25, 27 and 28 — should be modified or removed.

Sections 25 and 27 require the territory to obtain approval from the UK secretary of state for certain fiscal decisions, and Section 28 states that breaching the Protocols’ borrowing guidelines constitutes a breach of the agreement itself.

Opposition members have criticised the government’s delay in launching a comprehensive stimulus package, pointing out that community members have been overburdened with making tough decisions after going two months without at least a basic understanding of what support may be made available to them.

The opposition on May 18 published suggestions for a stimulus package. The proposal focused on supporting tourism and financial services, the legs on which the VI’s economy stands, as well as food production, construction, and unemployment benefits.

The premier responded to the suggestions by saying they were neither affordable nor realistic. Government plans to bring forward its own plan today, and he offered some insight into what could be included. Individuals and businesses may see a three-month amnesty on BVI Electric Corporation bills, he said.

Call for a plan

“There’s nothing in the Protocols for Effective Management to hold that back. There’s nothing from the UK holding that back,” Mr. Jaspert said. “It’s up to us as a government to do what we want to do and put forward those proposals.”

Both the opposition and the governor also called for more communication from government about long-term financial plans.

“I hope that BVI government will soon enter discussions with the UK on their economic plans for the territory, including any concerns over the Protocols, so that we can work through them together,” Mr. Jaspert said.