The world watched this week as Queen Elizabeth II was laid to rest following her death on Sept. 8, and Virgin Islands leaders joined in mourning both here and in …

END_OF_DOCUMENT_TOKEN_TO_BE_REPLACED 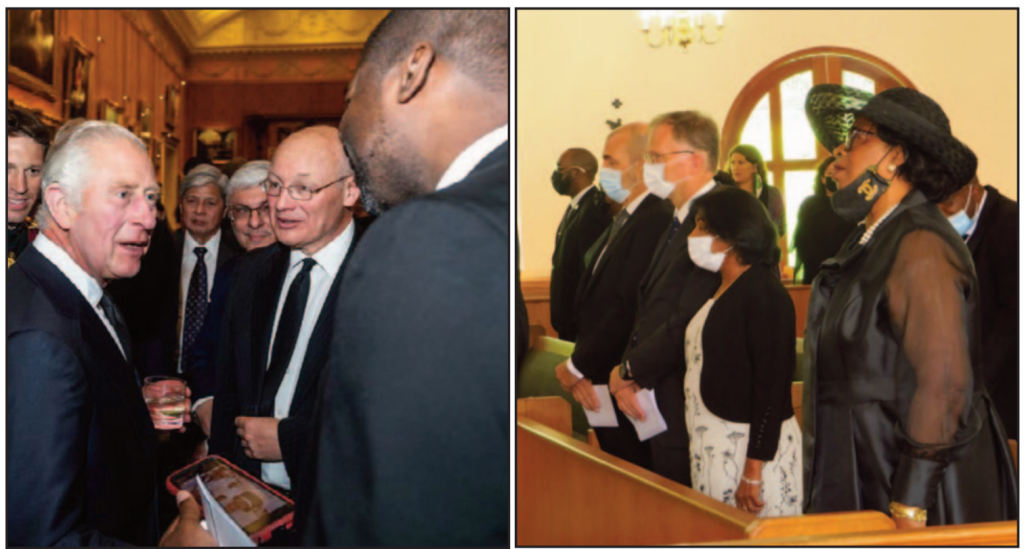 The world watched this week as Queen Elizabeth II was laid to rest following her death on Sept. 8, and Virgin Islands leaders joined in mourning both here and in the United Kingdom.

As part of a grand state funeral in London unlike any other in recent history, the body of the late Queen journeyed to Westminster Abbey on Sept. 19 via the State Gun Carriage of the Royal Navy for a religious service attended by hundreds of world leaders.

Among them were Premier Dr. Natalio “Sowande” Wheatley and Governor John Rankin.

Ms. Grant-Davis later wrote on Facebook that the experience was a “rather precious memory that will be forever etched in my mind.”

She joined the Cayman Islands and Montserrat in representing the British overseas territories in their ceremonial white tunics, which garnered much interest from attendees.

“All were immensely happy to see that the OTs were represented,” Ms. Grant-Davis wrote about joining the procession with representatives from Bermuda, the Falklands and Anguilla. “We were not in numbers, but we stood out. … History will record the footprints of the territory in that very auspicious event marking the passing of Her Majesty, Queen Elizabeth II.”

After the funeral at Westminster Abbey, the Queen’s body travelled to Windsor Castle for a smaller committal service and private burial.

Both the governor and premier also signed a book of condolence at Lancaster House on Sept. 17, and the premier met King Charles III during a reception for heads of state and overseas visitors at Buckingham Palace on Sept. 18.

Reverend Sandra Walters led a sermon in which she reflected on the monarchy and the Queen’s travels to the Caribbean.

The reverend also shared a personal anecdote about working at a news broadcast station in Barbados when the Queen and Duke of Edinburgh paid a visit in 1988. She remembered the Queen’s warmth and sense of humour upon meeting members of the press.

“We leave a trace and impression — whether good, bad or indifferent — with everyone we encounter,” she said.

The service ended with attendees singing the UK national anthem, which now lauds the new king.

After the service and at other points earlier last week, VI community members filled the pages of a condolence book at the Old Government House Museum.

One signatory was Annie Gardner, who in 2015 was appointed as a Member of the British Empire by the Queen for outstanding service to the community.

Ms. Gardner paid her respects and walked around the museum’s exhibits, remembering royal visits from the past.

Members of the House of Assembly also offered their condolences during the Sept. 20 HOA sitting.

“At the start, many doubted whether her youth, her limited experience, and even her gender were suitable or satisfactory for the tremendous responsibility of being monarch of an empire that spans continents,” acting Premier Kye Rymer said of the Queen’s ascension to the throne at 25 years old. “But with courage, Her Majesty stepped into her role and owned it with confidence for every moment of the last seven decades.”