Despite a missed deadline to publish the Register of Interests by June 30, Governor John Rankin and Premier Dr. Natalio “Sowande” Wheatley said on July 1 that they are pleased …

END_OF_DOCUMENT_TOKEN_TO_BE_REPLACED 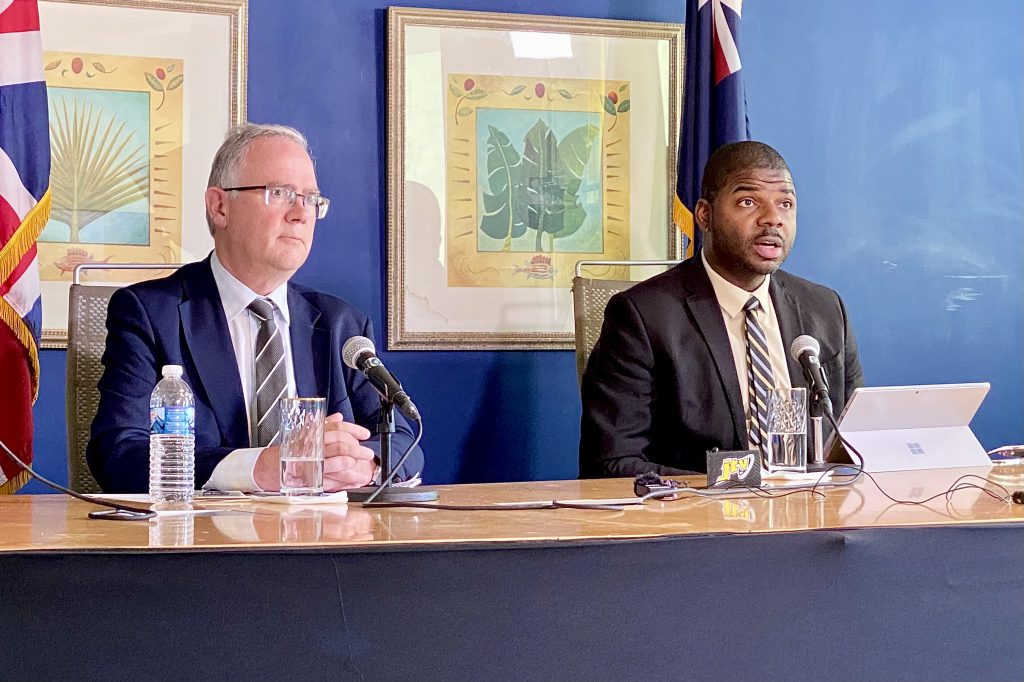 Governor John Rankin and Premier Dr. Natalio “Sowande” Wheatley, appearing together at a press conference for the first time since they announced the Commission of Inquiry reform plan, share details of their efforts concerning constitutional review and other measures. (Photo: DANA KAMPA)

Despite a missed deadline to publish the Register of Interests by June 30, Governor John Rankin and Premier Dr. Natalio “Sowande” Wheatley said on July 1 that they are pleased with recent progress toward carrying out the Commission of Inquiry recommendations.

Since the pair announced the United Kingdom-approved reform plan on June 8, they said, leaders have been working diligently to carry it out.

“Change is hard, and tough decisions are required,” Mr. Rankin said. “The deadlines in the framework are challenging. But this reflects the urgency of the task in front of us.”

The 22-page reform plan sets nearly 100 deadlines, many of which fall within the first few months of an approximately two-year period. If the deadlines aren’t met, the UK may implement direct rule in the territory.

So far, however, the leaders said that only one deadline has been missed, and they have plans to soon rectify that shortcoming. Otherwise, they said, they’ve met their targets.

A total of 18 more deadlines are set for this month, tackling issues like reviewing law enforcement and justice systems.

The projected cost of the reforms has not been announced, but Dr. Wheatley said on July 1 that work is under way on an estimate that he should be able to present by mid-July.

The composition remained similar to the 11-member team appointed in December 2021 by the previous Andrew Fahie-led government.

Selecting the members, however, wasn’t entirely smooth sailing, according to the premier.

He noted that 14 of 16 members received unanimous approval, and the remaining two were among the three candidates the governor selected.

The premier said candidates are traditionally chosen only by elected officials, but the governor provided three nominees this year as part of the COI reform plan.

“There are persons who have very passionate views that the governor should not be involved in the process and made very strong representations in Cabinet over a number of days,” Dr. Wheatley said. “The concerns of the people who have raised objections, I believe, are valid and must be respected. But in the end, of course, given the fact that the governor and the premier have to agree and for us to not be at a stalemate, it was important for us to move forward.”

Critics of the two committee members raised personal issues with them, according to Dr. Wheatley.

“Persons brought up personal experiences they’ve had with the individuals,” the premier said. “They brought up what they believed to be how they’ve regarded and treated persons from the Virgin Islands.”

Despite these disagreements, he said it is important that the governor and elected government work in partnership to carry out all the necessary reforms.

“Representation of the interests of the Virgin Islands is robust, and the people of the territory can be assured that their perspective will be strongly represented,” Dr. Wheatley said.

He encouraged members of the public to attend planned forums about the reform implementation (one of which will be live streamed) and the constitutional review in order to make their voices heard.

Asked about his role in carrying out the COI reforms and whether his approach has been “heavy-handed,” Mr. Rankin said his aim is to fulfil the responsibilities outlined in the Constitution and the reform framework agreed by the National Unity Government and the UK.

“My approach will always be a constant one and a constructive one,” he said. “Of course, that doesn’t mean we’ll agree on every issue, and it doesn’t mean we won’t have sometimes difficult discussions. But what I’ll always seek to do is to find a way through.”

Mr. Rankin added that work is also under way on amending the Jury Act, the Audit Act, and the Proceeds of Criminal Conduct Act.

Meanwhile, a new internal steering committee has been formed to help carry out the COI recommendations, Dr. Wheatley said. Members include Premier’s Office Permanent Secretary Carolyn Stoutt-Igwe as chairwoman, as well as all five other permanent secretaries, the financial secretary, the attorney general, and the Office of the Governor’s director of strategy.

To support government ministries carrying out reforms, the premier added, a complementary “COI Report Implementation Unit” should be established by the July 15 deadline. The United Nations Development Programme is supporting those efforts, he said.

Dr. Wheatley also said a House of Assembly committee has been established to help stay on track with legislative reforms.

Work has been progressing in other areas too, Dr. Wheatley said. For instance, the Immigration Department started a project to strengthen administrative systems on June 13 and added more human resources on June 27, he explained.

Then on June 29, Cabinet approved the Ministry of Education, Culture, Youth Affairs and Sports’ recommended panel to review the Scholarship/Education Grants Programme, he added.

Meanwhile, senior managers are reviewing the draft protocols for appointing or removing statutory board members, according to the premier.

“The ministries of government also continue to do preparatory work for the next round of recommendations and other reforms to be implemented,” he said.