Instead of a private, invitation-only affair this year, Premier Andrew Fahie dressed as Santa Claus and hosted the “Christmas Extravaganza at the Festival Grounds,” inviting everyone to join in the …

END_OF_DOCUMENT_TOKEN_TO_BE_REPLACED 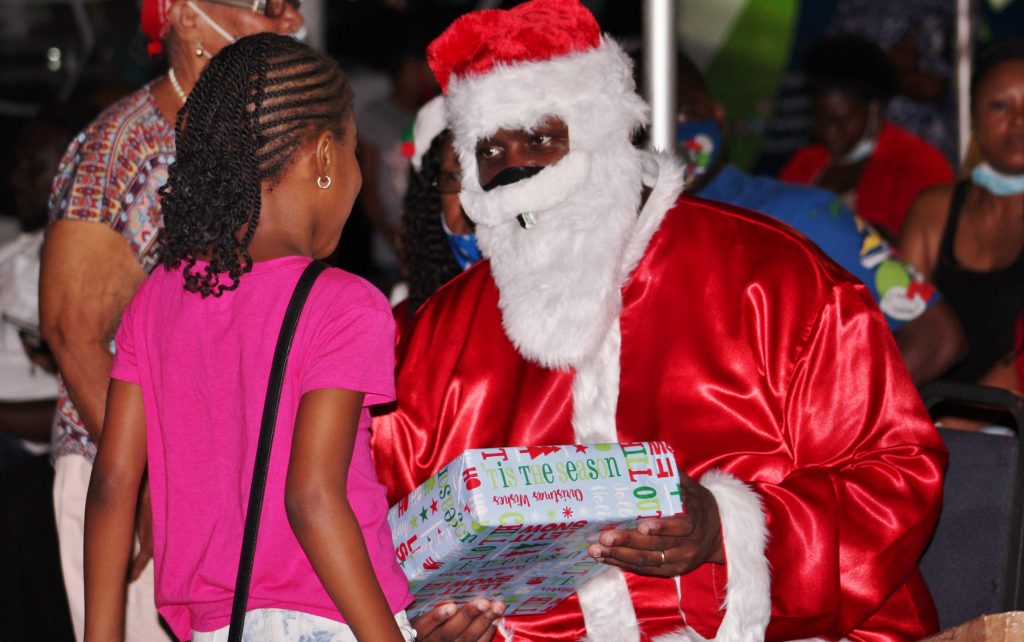 Premier Andrew Fahie dressed as Santa Claus on Saturday evening, and he handed out toys to children during a party where the public was invited. Photo: ZARRIN TASNIM AHMED

Instead of a private, invitation-only affair this year, Premier Andrew Fahie dressed as Santa Claus and hosted the “Christmas Extravaganza at the Festival Grounds,” inviting everyone to join in the festivities on Saturday evening.

“Ho, ho, ho, I tell you,” he said, getting up on stage and giving a few words of welcome to hundreds of people who attended the event. “When we look out all around us, most of the world can’t come out like this.”

He encouraged people to spread the “one thing that you don’t need money for: love.”

Mr. Fahie then led the congregation in an exercise where each person turned to the person on their right and left, saying, “Neighbour, I wish you double what you wish me.”

Dressed as Santa, he rode in on a convertible with a big green sack of toys as the Razorbladez performed traditional songs.

Then he handed out presents to children as a full line-up of performances lasted throughout the evening, including dance performances by troupes from the sister islands.

At-large Representative Shereen Flax-Charles joined the Razorbladez on the stage in singing a fungi version of the song “One Love” by Bob Marley.

Next up, the Band of Love went on the stage as boys from infant to 5 years went to Santa to get presents.

“I know for sure we are not having Christmas,” one actor said to another.

The other, however, begged to differ.

“Corona can’t stop Christmas!” he said. “Let we plan our own Christmas.”

After that, the North Sound Group performed for the congregation with festive melodies.

Attendees were encouraged to have some traditional Christmas food, including turkey, ham, fish and coconut bread.

More than 400 containers of food were distributed throughout the night, according to a volunteer who helped pass them out.

Hundreds also tuned in to the Facebook live feed that showcased the celebration, even residents in the United States.

Many viewers tuned in from Virgin Gorda and watched Leon and the Hotshots close out the night.