As elected officials self-isolated due to potential exposure to Covid-19 at a Sea Cows Bay funeral and active cases rose to their highest level in months, Health and Social Development …

END_OF_DOCUMENT_TOKEN_TO_BE_REPLACED 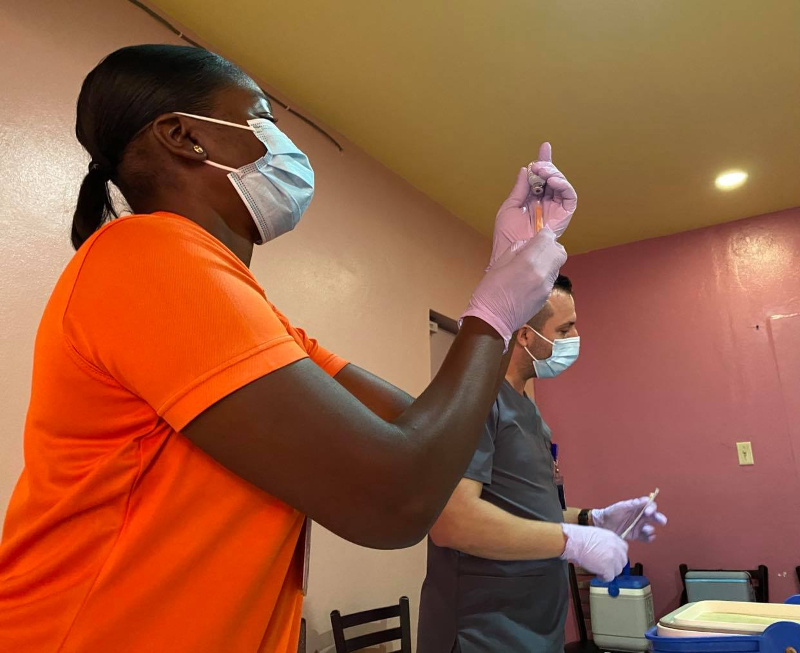 Nurses administered vaccines at various testing sites across the territory in recent days. Officials are urging eligible adults to get vaccinated as soon as possible. (Photo: DANA KAMPA)

As elected officials self-isolated due to potential exposure to Covid-19 at a Sea Cows Bay funeral and active cases rose to their highest level in months, Health and Social Development Minister Carvin Malone seized on the moment to continue begging residents to get their Covid-19 vaccinations and put the pandemic behind them.

“We were at the funeral and although not in direct contact we were asked to self-isolate and we did,” Mr. Malone told the Beacon in a Tuesday, April 6 message.

Premier Andrew Fahie and Opposition Leader Marlon Penn were also confirmed to be self-isolating for 10 days. On Thursday, April 8, Mr. Fahie declared in a Facebook post that his results were negative.

Last week, the ministry said anyone who attended the March 27 funeral should isolate. However, government indicated that people who have received a vaccination — which includes the three officials — may not need to isolate, a directive that follows current guidance from the United States Centers for Disease Control and Prevention.

Government also remained tight-lipped about why the mourner who tested positive was out in the community, amid conflicting reports about whether the person had been released from quarantine.

As of Monday, known active Covid-19 cases in the territory had jumped from nine to 18, with 14 new cases since March 28 and five recent patients recovered. Eleven of those cases were identified on “day zero” and “day four” screenings, according to government.

An additional three came through travel screenings, and four “local cases” were identified, Mr. Malone said Monday without defining what he meant by “local cases.”

Fourteen of the cases were on Tortola, one was on Anegada, and three were on vessels, according to government.

All were asymptomatic, but Mr. Malone said one of the patients was hospitalised for an unrelated condition.

The spike in cases was not related to the Sea Cows Bay positive test, as testing of those who attended the funeral had not yet begun as of Monday, according to the minister.

Dr. Ronald Georges, the former acting chief medical officer who now advises the Ministry of Health and Social Development, said during a question-and-answer session last week that since the incubation is 14 days, testing would not begin until 10 days of self-isolation was over.

Tortola residents were tested Tuesday and yesterday at Ebenezer Thomas Primary School, according to Mr. Malone.

In the meantime, Cabinet decided at its March 31 meeting that the crowd size limits for outdoors be reduced from 200 to 75 people and for faith-based services, graduations, weddings and funerals from 200 to 100.

Cabinet also decided that written permission must be requested for crowd sizes of more than 75 people.

As vaccine rates slow in the territory, Mr. Malone attempted in his Monday statement to combat misinformation and conspiracy theories being circulated about the vaccine.

Again, he stressed vaccines as key to fully reopening the territory, jump-starting the tourism economy, and returning life back to normal.

On Tuesday, during the Virgin Islands Party’s “Let’s Talk” show, he even suggested that the current curfew order may be allowed to expire for the first time in over a year.

“I don’t think we’ll have need for any more curfews,” the minister added.

As of Tuesday, he said, 8,381 first doses of the vaccine had been administered, which works out to about 23 percent of the population. The monthly statistics show that 4,068 units were administered during the month of February; 3,790 during March; and 523 so far in April. Mr. Malone said he wants to see that pace, which has been slowing, increase.

Distributing the jabs is urgent, he said, as the first shipments of the vaccines will expire in May, June and July.

He added that four private medical providers signed on to a plan to provide the vaccine to their patients.

“Those persons who are intent on making sure that they visit their private practitioners: All four of the businesses that have applied would be given the opportunity to sign this memorandum of understanding,” he said, calling the MOU “ready for signature.”

He added, “Given the global position of availability of vaccines, it is critical to use what we have and not allow for any spoilage as at some point there will be a shortage of vaccines which will impact our efforts, our safety, our economy, our schools and our livelihood.”

Opposition Leader Marlon Penn (R-D8) also weighed in this week on the vaccine rollout, which he said is not good enough.

Not for the first time, Mr. Penn blasted the government’s “lack of planning” related to the vaccine rollout and blamed it for a failure to convince more residents to take the jab. “We recognise that the vaccine is not a silver bullet: It is imperative that a plan is put in place to live, work and manage Covid in our territory,” he said in a press release on Monday. “I am hopeful that our vaccines do not go to waste and we are able to utilise all of the donations received.”