A new Magistrates’ Court is currently being designed and planned as part of the first phase of the “Halls of Justice” project, according to Government Information Services. Premier Andrew Fahie …

END_OF_DOCUMENT_TOKEN_TO_BE_REPLACED 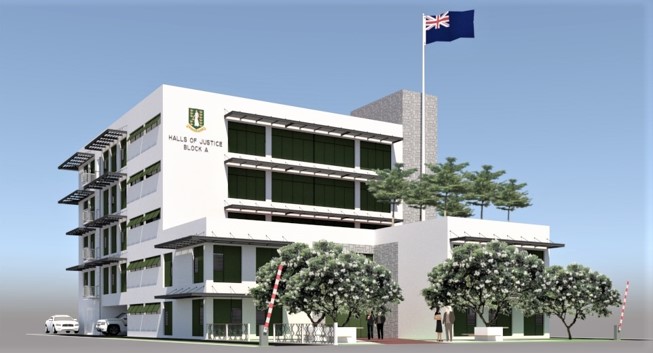 A concept developed by Trojan Design and Development Ltd. was posted along with the announcement that new court facilities will soon come to the territory. (Photo: PROVIDED)

A new Magistrates’ Court is currently being designed and planned as part of the first phase of the “Halls of Justice” project, according to Government Information Services.

Premier Andrew Fahie said the building is a priority that will receive funding in the 2020 budget estimates.

“Construction of the new court facility will provide the much-needed rooms and space to allow for a proper and functional court system,” he said, adding, “My government is committed to developing a court facility that is resilient and ‘SMART,’ and meet the needs of the people of the Virgin Islands.”

The Magistrates’ Court facility in Johns Hole sustained extensive damage during Hurricane Irma in 2017 and has been inoperable ever since. A temporary modular structure was constructed and commissioned in July 2018 to accommodate court sittings.

The ongoing project is being funded under the Rehabilitation and Reconstruction Loan from the Caribbean Development Bank, which was secured by government to assist with the hurricane recovery.

Dr. Drexel Glasgow, director of projects in the Ministry of Finance, said that following a tender process, the firm Trojan Design and Development Ltd. was contracted to prepare designs for the new facility.

“The conceptual designs pre- pared by Trojan are quite impressive and is an excellent start to developing a building that we can be proud of as a territory,” he said.

The next step for this project is “a stakeholder engagement meeting” with government officials to finalise the requirements for the court facility, according to GIS.