The framework for carrying out Commission of Inquiry recommendations includes a deluge of deadlines for July, but Premier Dr. Natalio “Sowande” Wheatley said last week that his National Unity Government …

END_OF_DOCUMENT_TOKEN_TO_BE_REPLACED 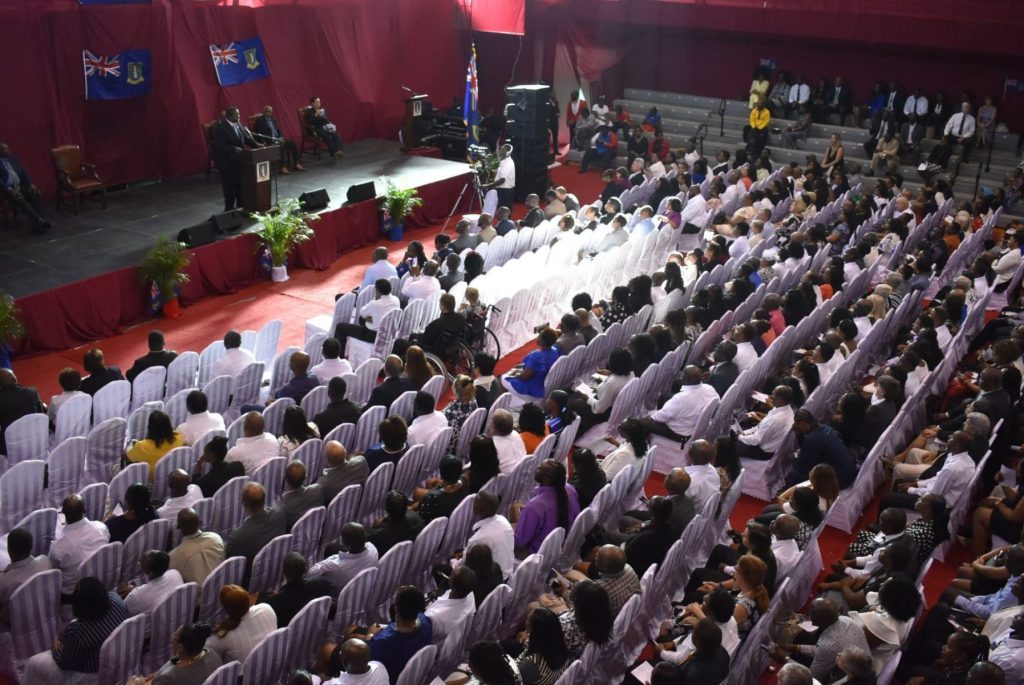 Among the deadlines coming up this fall for the Commission of Inquiry recommendations is a review of belongership criteria. Above, 852 people received their belongership status and 129 gained residency at a December 2019 ceremony. (File photo: ZARRIN TASNIM AHMED)

The framework for carrying out Commission of Inquiry recommendations includes a deluge of deadlines for July, but Premier Dr. Natalio “Sowande” Wheatley said last week that his National Unity Government is on track to meet those targets and others coming up this fall thanks in part to the hard work of public officers.

The government faces pending deadlines to provide support to the auditor general, review policy for government contracts obtained by House of Assembly members, and more by July 31.

Dr. Wheatley and Governor John Rankin announced on June 8 that the United Kingdom and Virgin Islands governments had reached an agreement to cooperatively carry out the recommendations from the COI report.

Since then, steps to meet those deadlines have included establishing a new Constitutional Review Committee, having the auditor general prepare a timetable to audit various areas of government, ordering an investigation as to whether the Premier’s Office obstructed the auditor general, making the Register of Interests public, and more.

“It is clear from the foregoing that the Government of National Unity, the public officers in the respective ministries, and all parties including the governor and the Governor’s Group, are working hard and are seriously committed to delivering the implementation plan for addressing the COI recommendations and the other reforms,” Dr. Wheatley said on July 21 in the House of Assembly. “It is also clear that we are keeping up with the timelines that were agreed with the UK.”

Dr. Wheatley added that the government has also proposed some measures that go beyond what the COI team recommended.

“Let me reassure the people of the Virgin Islands that the Government of National Unity is firmly committed to our obligations as set out in the framework,” he said.

He added that the steering group staffed by the Premier’s Office permanent secretary, other permanent secretaries, the attorney general, the financial secretary, and the Governor’s Office director of strategy has been helpful in coordinating the government-wide reform. Another reform committee established by the HOA is responsible for establishing a timetable to make sure all the necessary legislation gets passed on time.

In his HOA statement, the premier drew attention to several of this month’s accomplishments. He said “a local lawyer” has been identified to conduct an independent review of the discretionary powers of Cabinet and government ministers “to ensure that these are not excessive or abused,” with the assistance of the Premier’s Office. The deadline for selecting a reviewer was July 1, and the report is due Oct. 31. Dr. Wheatley didn’t name the lawyer, however.

Cabinet also met its goals of taking interim safety measures to address security concerns at ports, and the Attorney General’s Chambers is finalising recommendations for Jury Act revisions due July 31, he added.

Dr. Wheatley also said issues of contract-splitting and advance notice of tender waivers have already been addressed with the recent Procurement Act and draft regulations.

Before the month ends on July 31, the government still has a few deadlines to meet.

The House, for instance, must pass legislation criminalising failure to cooperate with the Office of the Auditor General or the Internal Audit Department.

Dr. Wheatley said Cabinet approved the relevant amendments, and he was optimistic government would meet the July 31 deadline. To that end, he introduced the Audit (Amendment) Act, 2022 on July 21. Though cameras stopped rolling before the act came for a vote, HOA Public Relations Officer Linton Leonard confirmed on July 27 that the legislation passed.

The House plans to reconvene on Aug. 9.

There is also a July 31 deadline to restructure how the complaints commissioner delivers reports, and how quickly public officers are expected to respond to the office. Dr. Wheatley said draft Cabinet papers have been prepared to address those issues.

He added that he soon expects a letter of appointment for a senior jurist who will review the practice of HOA members contracting with the government, meeting another July 31 deadline. He didn’t name the chosen jurist, however.

Another reviewer he didn’t name has been appointed to begin reviewing policies related to good governance, accountability, transparency and value for money before July 31, he added.

Also before July 31, Dr. Wheatley added, he plans to issue a letter of appointment for a reviewer approved by Governor Rankin to consider Crown Land disposal.

The framework doesn’t include any deadlines for August, but several projects must be under way by September, according to the plan.

By Sept. 1, a “suitable” reviewer such as a retired Eastern Caribbean Supreme Court judge must start reviewing the Commissions of Inquiry Act 1880 to bring it up to modern Common Law standards. Both the premier and governor must agree on this appointment, and the reviewer must submit a completed report by February 2023.

Also by Sept. 1, Cabinet must propose a senior jurist or reputable attorney to review the guidelines for statutory board appointments so they can deliver a report by Dec. 31.

Similarly, a suitable reviewer must be appointed by Sept. 1 to review policies for granting residency and belongership status, “including the open discretion by Cabinet to grant such statuses and the length of residence required for belongership, among other things,” according to the reform framework.

“Cabinet committed that from June 1, 2022, the existing legislation on residency threshold — minimum of 10 years — would be followed pending completion of the above-mentioned review,” Dr. Wheatley said on July 21. “I can report that the Immigration Department has been adhering to this recommendation and has discontinued the use of the previous response given to applicants who did not meet the 20-year requirement.”

He continued, “In the coming months, we expect to engage in discussions on the difficult, but necessary, subject of immigration reform.”

The premier said in a statement on July 25 that it is important to clarify conflicting policies on the length of residency needed to apply for belongership, and a structured dialogue on immigration policy is still needed.

He added that the community must consider what other criteria besides length of residency should be considered in granting belongership status.

“Patriotism, a sound knowledge of history of the Virgin Islands, and your social and civic contributions to the society are all very important things, among other factors,” he said. “In addition, there is a socioeconomic dimension that must be considered when granting residency for belongership in terms of what the society can reasonably accommodate and sustain over time.”

He said the public meetings would be announced soon.

By Sept. 30, the House must also amend existing legislation to follow recommendations from the Supervisor of Elections’ General Elections Report 2019 and Observer Mission of that year.

“This is a voluminous amount of work, and based on what has been happening since we started work on this reform programme, what we are seeing is evidence that our public officers do have a lot of previously untapped abilities and capabilities,” Dr. Wheatley said. “They deserve our commendation — as does the whole team.”