During what may have been Governor Gus Jaspert’s last press conference before he steps down in January, he called for governance reforms and transparency measures and told the media that …

END_OF_DOCUMENT_TOKEN_TO_BE_REPLACED 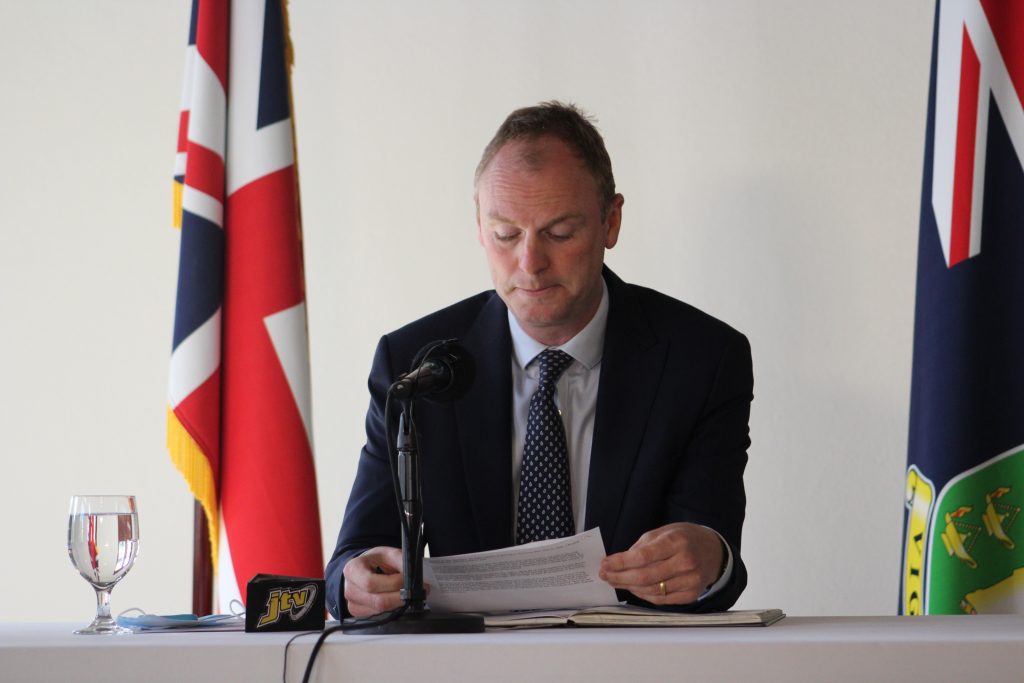 Governor Gus Jaspert hosted what may be his last press conference before leaving the territory in January. He brought up allegations made by members of the community regarding public spending, unexplained wealth, and a growing “culture of fear.” (Photo: ZARRIN TASNIM AHMED)

During what may have been Governor Gus Jaspert’s last press conference before he steps down in January, he called for governance reforms and transparency measures and told the media that he has heard allegations about victimisation and a growing “culture of fear” in the territory.

But Premier Andrew Fahie — who has publicly attacked the governor repeatedly in recent months — responded sharply the same day, reprimanding him for making such allegations without providing details or proof.

Mr. Jaspert said at the “catch-up” session last Thursday at Government House that many people have come to him with serious concerns about governance in the territory.

“Recently I’ve had a number of concerns and allegations put to me by the community,” he said. “I will not go into specific details of these, as they are allegations, but I will broadly speak to the areas they touch on.”

The first issue he addressed was a perceived lack of transparency with public projects and funds.

“The auditor general has written numerous reports detailing the common problems in this area: tender waivers, interference, contract splitting, and inflated prices being a few examples,” he said.

Investigations are under way on some related matters, Mr. Jaspert said, adding that recommendations in past audit reports haven’t always been followed.

“I know many people are concerned about this, particularly in relation to government contracts and recent stimulus funds,” he said. “These concerns are exacerbated by the fact that details on government spending [are] not always available to the public and our institutions of good governance.”

The auditor general, police commissioner, complaints commissioner, deputy governor, Financial Investigation Agency, and registrar of interests are discussing what more can be done, he added.

“One thing we can be sure of is that robust, holistic and impartial investigation is required to reassure the people of [VI],” he said. “Regrettably our local institutions have told us they may be hindered in carrying this out without the legislation and full frameworks in place to give them the mandate to do so. We will continue to assess what needs to be done as we find out more.”

Mr. Jaspert added that he is in “listening mode” and wants to understand the scale of concerns to assess what is really happening.

Other areas of concern are the recent rise of drug offences and gun violence in the territory, Mr. Jaspert said.

He added that the territory is bolstering security, including by rebuilding the police marine base and inviting UK marine police officers to provide training.

“We are also putting forth legislation to help our agencies to investigate unexplained wealth, which I hope the Cabinet — and in due course, the House — will support,” he said.

He added that the community has raised concerns about intimidation and victimisation.

“These have been put to me by a number of individuals in senior positions across the territory, even from some in the
media,” he said. “Some have described a growing culture of fear — strong allegations which we cannot brush aside.”

The governor assured residents that no one should be afraid to voice a concern because freedom of speech is a constitutional right. He added that everyone should be allowed to do their job without fear or favour.

He also announced that he and Deputy Governor David Archer Jr. will “shortly be bringing forward” the Integrity in Public Life Act, which he said will help ensure accountability.

During his time as governor, Mr. Jaspert said, his goal has been to make the VI “as successful as it could be with equal opportunities and high standards of good governance for all.”

The people, he added, want to see laws and policies in place that ensure transparency and accountability, and the public service is filled with officers committed to achieving good governance.

“Therefore, when I talk about improving governance — despite what some may say — I do not do so as a criticism of BVI, but based on what I believe the people of BVI want,” he said. “I, like the majority of people here, want BVI to be as successful and self-determining as it can be.”

Later the same day, the premier released a statement criticising the governor’s claims at the press conference.

“These statements by the governor warrant a comprehensive response from your government as it has implications on the local, regional and international reputation of British Virgin Islands and how all Virgin Islanders are viewed by persons looking on,” Mr. Fahie said.

Mr. Jaspert’s allegations were “vague and sweeping,” he added, alleging that casting “aspersions” on “government’s commitment to accountability and transparency in public affairs is unfounded.”

He added, “It is unfortunate that Governor Jaspert has chosen to make these damaging and reckless statements when, by his own admission, the veracity of these allegations has not been established by him or any investigative body.”

The premier stated that funds from the Social Security Board for the Covid-19 stimulus measures were provided under the terms of a signed agreement that “mandates how the money can and cannot be spent, and checks and balances that were approved by the directors of the SSB.”

Government, however, has not provided a comprehensive account of the great majority of the spending, andMr. Fahie and other officials haven’t responded to the Beacon’s questions about it in recent months.

In response to the legislation that Mr. Jaspert mentioned, Mr. Fahie said his government’s legislative agendaalready included the Integrity in Public Life Bill, as well as witness anonymity legislation and amendments to the Criminal Conduct Act to “make provisions for unexplained wealth which derives from corruption and criminal activity.”

The premier said he couldn’t provide a more detailed response until the governor discloses more information on the allegations, but that he is happy to provide a “comprehensive reply” at that time.

Though the governor didn’t specifically mention loan funds from the Caribbean Development Bank, Mr. Fahie brought them up as an argument that the government has been using money transparently. He said the CDB had to approve the government’s procurement policies before disbursing the funding.

Also during the Thursday press conference, Mr. Jaspert paid tribute to public officers, noting that he visited many of them during Public Service Week at the end of November.

He also announced plans to launch a governor’s award called the “Medal of Meritorial Service” for law enforcement and national security services.

“We’ve been fortunate this year not to experience any major landfalls,” he said. “But unfortunately the same cannot be said for our neighbours in the region, particularly Central America.”

During a question-and-answer period with the media, Mr. Jaspert declined to respond to questions about a recent statement he made on slavery and reparations and about the alleged dismissal of a police officer after a shootingon Virgin Gorda.