On Monday evening, Premier Dr. Orlando Smith announced that he would not run for reelection as president of the National Democratic Party — signaling the end of an era for …

END_OF_DOCUMENT_TOKEN_TO_BE_REPLACED 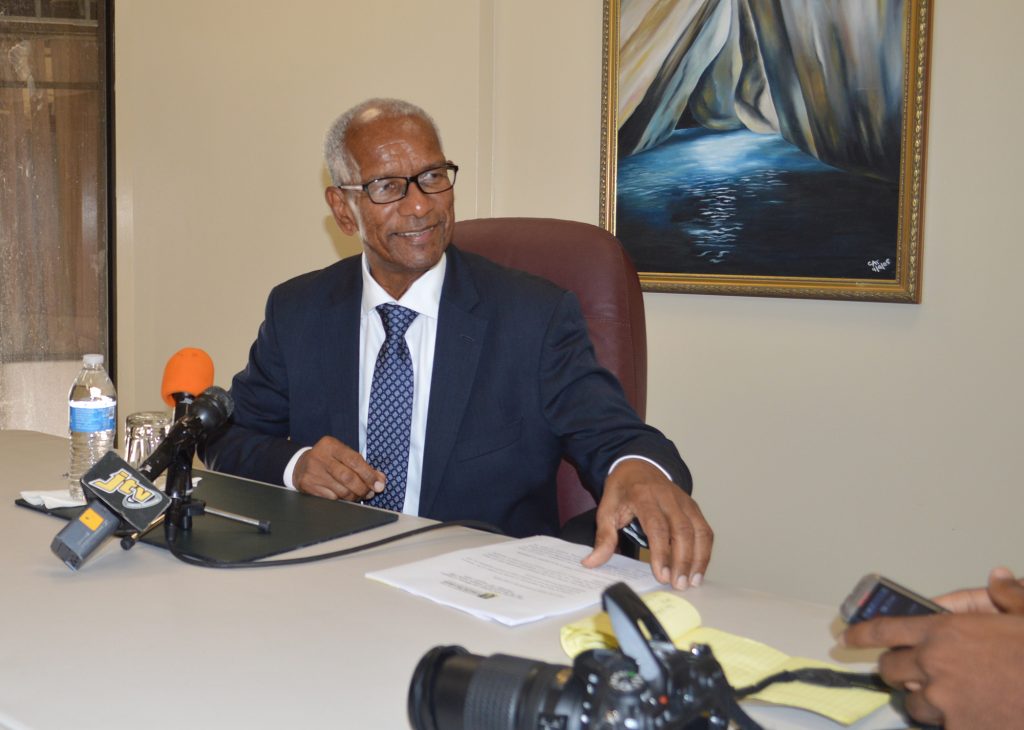 On Monday evening, Premier Dr. Orlando Smith announced that he would not run for reelection as president of the National Democratic Party — signaling the end of an era for the most dominant Virgin Islands political organisation of the past two decades.

That decision, Dr. Smith (R-at-large) explained, would mean a change in standard-bearer for the NDP at the next general election.

“And while my journey as the premier and leader of the territory will come to a close at the end of this Government’s term in office, the mission that was launched so many years ago lives on,” he said in a statement posted to his Facebook page on Tuesday.

At a press conference two days later, however, the premier told reporters that he hadn’t yet made a decision about whether he would contest the general election or not, despite his choice not to run again for the party presidency.

Dr. Smith has led the NDP since its inception in 1999, personally succeeding as an at-large candidate in five consecutive general elections as well as commanding his party to three overall victories. He first served as chief minister from 2003-2007 and — after the constitutional review in 2007 — as premier from 2011 onwards.

“At some point next summer or maybe even before, we will have another general election. In that election, the NDP will once again stand,” Dr. Smith said in his statement. “The question I have asked myself is whether I should seek to continue to lead the party. And after much thought and prayer, after discussing the question with my colleagues and with my family, I have concluded that I should not.”

Not running, Dr. Smith explained, would allow him to devote all of his remaining time in office to facilitating the territory’s continued recovery from the trio of catastrophic storms last year.

Both ministers plan to compete for the post during the party’s convention on Saturday evening, according to NDP Deputy Chairman Dr. Michael Turnbull.

Dr. Turnbull noted that no other party officials have announced their intention to run for party leader, though he stressed that the list of candidates will not be finalised until the night of the convention when nominations are made. The pair’s decision to campaign publicly, he explained, does not rule out the possibility that others are doing so privately.

Dr. Smith did not provide an endorsement of anyone when asked at the press conference on Thursday.

“I think that all the persons who are going to be running for leadership, whoever they may be – the ultimate [list] may be more because nominations take place from the floor – I think they are all qualified,” he said.

Though Dr. Smith’s NDP did not win the government when it first contested elections in 1999, it posed a formidable challenge to the Virgin Islands Party, which by then had held power for 13 years, and heralded the start of the two-party system that has dominated the political landscape ever since.

For the next 11 years, the parties traded places each election — one in government and one in the opposition — until the NDP won the first election of a two-term government in 2011.

In his nearly 20 years in leadership roles in the legislature, Dr. Smith gained a reputation as a soft-spoken but determined lawmaker committed to strengthening the territory’s economic pillars and modernising its institutions.

In his statement on Monday evening, he mentioned some of the highlights of those efforts.

“We focused on growing our economy and created the conditions for our territory’s gross domestic product to surpass one billion dollars,” he said. “We carefully conserved public resources and were able to set aside reserves in excess of 60 million dollars — money that proved crucial in the recent hurricanes.”

The premier also discussed the construction of Peebles Hospital, the Tortola Pier Park, the Virgin Islands Technical School and the rubberised track at A.O. Shirley Recreation Grounds, as well as the accreditation of the H. Lavity Stoutt Community College, the establishment of the Business Bureau, and the implementation of National Health Insurance.

“I think he’s done what most politicians should do,” said Neil Smith, who works under Dr. Smith as the executive director of the Office of International Business (Regulations). “I think he’s contributed to society. I think [the territory] made advancements, period. They might not have been as much he would’ve hoped, [but] he transformed it into a more sophisticated society.”

Among those advancements, Mr. Smith — the former financial secretary — explained, were steps forward in the financial services industry, which weathered numerous external publicity crises during Dr. Smith’s time as premier.

“He’s very easy to work with,” said Arliene Penn, government’s communication director. “I did enjoy my time working with him.”

His premiership was not without controversy, however. Critics recently attacked his government for a perceived lack of transparency, especially regarding the details of controversial projects like the $7.2 million deal with BVI Airways — which never resulted in a commercial flight — and the $85 million-plus Tortola Pier Park, which saw at least $30 million in cost overruns.

Even some members of his own party — including backbencher Mitch Turnbull (R-D2) — at times called for his resignation as the minister of finance, a position he’s held concurrently as premier since 2011.

He has also been criticised for what some residents perceived as being overly accommodating to foreign developers, though he has countered that outside investors help boost the territory’s economy and create jobs.

His 2003-2007 administration, for example, was attacked for its plan to allow a Hong Kong developer to construct a golf course and resort on Beef Island.

The proposal, which fell by the wayside after a lawsuit waged by concerned citizens, was largely blamed for the NDP’s defeat in the 2007 election.

Despite his decision not to seek another term as leader of his party and the territory, Dr. Smith expressed a positive outlook for the VI’s future.

“It is time for a new chapter to be written,” he said in his statement. “Tragically, the opening pages of that chapter will be defined by the hardship of natural disaster.

“But I am convinced that the pages that follow will be a tale of triumph, for as a great poet once said, setbacks such as those we experienced can serve to ‘shake the soul, and let the glory out.’ And I am confident that with the right leadership, the coming years and decades will be bright for the BVI.”