St. George’s Episcopal Church on Main Street in Road Town is one of the territory’s designated disaster shelters, and anywhere from 20 to 40 people have stayed there together since …

END_OF_DOCUMENT_TOKEN_TO_BE_REPLACED 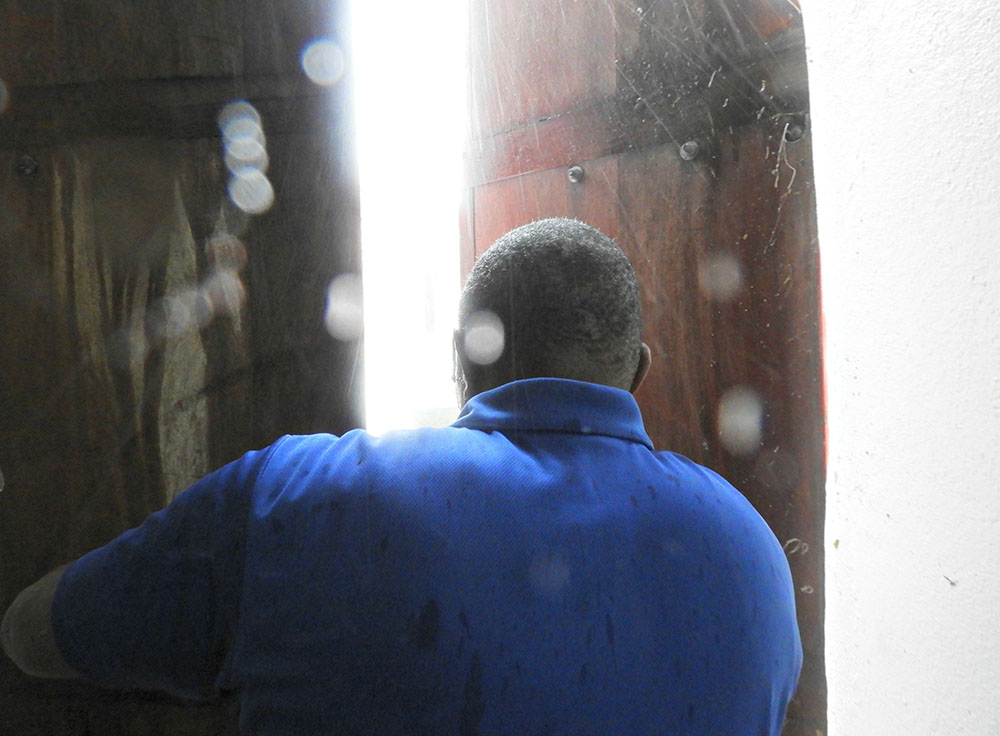 St. George’s Episcopal Church on Main Street in Road Town is one of the territory’s designated disaster shelters, and anywhere from 20 to 40 people have stayed there together since it was activated in response to Hurricane Irma.

But a week after the storm, pressures have begun to mount as drinking water runs short and tempers flare in the church sanctuary, where occupants were relocated during the eye of the storm because the nearby church hall began to leak heavily.

“I’m stressed, trying to keep strong,” said shelter manager Rashurma Lyons, who is volunteering for the Department of Disaster Management. “I’m a helper, but I’m frustrated.”

Ms. Lyons has supervised the collection and distribution of supplies in the shelter, managed interpersonal conflicts, and seen to the general care of about 115 people who have stayed at least one night in the shelter.

The church started off with 19 people, and the numbers have fluctuated since then but are now around 30.

Ms. Lyons is in charge of all of the residents, who eat, talk and sleep in pews in the church, where young children play and a few seniors have been bedridden in cots.

“The main thing is that I don’t have help” in managing the shelter, said the volunteer, who isn’t paid for her services. “It’s just me.”

More than once in recent days, the shelter has run out of drinking water, and as of early Thursday afternoon the supply was down to about a dozen 12-ounce bottles. Food is also scarce: Cooked meals have been delivered by church members or other volunteers about three or four times over the past week, but many occupants — including some who lost everything in the storm — have subsisted largely on a dwindling supply of canned foods.

Security is also a concern in the shelter, which can’t be locked up because its large doors were blown off their hinges.

Ms. Lyons has been told that looters and violent criminals have been roaming the streets of the capital, but when she went to the Road Town Police Station to request a guard for the shelter, she was told that none were available. Police, she said, told her that they would patrol the area and stop by on occasion, but she hasn’t seen any officers or other security personnel at the shelter since it opened.

Instead, men and women sheltering in St. George’s have done their best to stand guard throughout the night.

But with tempers running high, even the residents can be a threat: Ms. Lyons said a fight almost broke out on Thursday morning.

Dr. Ian Rock, rector of St. George’s, was troubled by a lack of preparation at the shelter, which was not supplied with food and water before the storm. Shelter occupants had been asked to bring their own supplies, but many didn’t know that, and others arrived during the storm’s eye or after it passed with nothing but the clothes on their back.

“To be honest, we have been totally isolated here,” Dr. Rock said. “Rashurma is the shelter manager and is unsupported. To me, that is not fair and lacks a management approach.”

He added that he is often caught feeling hopeless, distressed by the falling water level in the cistern, which is not drinkable but is being used to flush the toilets and bathe.

The pastor said he gave priority to those who are diabetic or living with chronic illnesses, so that they may receive provisions first.

“No one from the DDM has ever visited St. George’s even though it’s classified as a major shelter,” he said.

The shelter does have electricity — power has been extended to the church complex by the FLOW building next door — but efforts to get ahead are plagued by a lack of communication. Information is usually delivered by word of mouth, and unverified rumours thrive.

Ms. Lyons said her cell phone service is only now coming back on stream, but it is still patchy, and a radio that she was provided stopped working the day of the storm.

In spite of the challenges, shelter occupants said they are extremely grateful to have a place to stay.

“All I can say is thank God for this shelter and thank God for Rashurma,” said Dorothy Nibbs, a senior who watched most of her Main Street home blow away as she huddled behind a wall with her 8-year-old granddaughter, her husband, her cat and her dog. “God really made people like she to look after the unfortunate.”

Asked what she plans to do next, Ms. Nibbs looked down and shook her head.

For Jaimez Stoutt, a 27-year-old veteran of the United States Army, the shelter provided a haven for himself, his grandmother and his grandfather for several days after their Huntums Ghut home was destroyed.

“I didn’t want to come to a shelter because I thought shelters would have been crowded, but here is actually better than any situation we was in, you know what I mean,” he said Tuesday, adding that he was working to relocate his relatives to the United States but that logistics had proved difficult.

Derry Atkins, a music teacher for St. George’s primary and secondary schools, started coming to the shelter after the storm, and he has become a regular fixture, helping out where he can and playing the piano in the evenings.

Though his home wasn’t destroyed, it remains shuttered, and it is wet and dark without electricity. The shelter gives him a place where he can socialise and plug in his phone.

“This is a facility for which I am grateful,” he said, “because it helps me keep people up to date.”

However, he added that some occupants are abusing the shelter.

“Some people want to be catered to as if they were at home,” he said. “Yes, we have a few elderly people who need that sort of assistance, … but people asking that meals be prepared for them and served to them — that’s not right.”

Before a brief lights-out sermon on Saturday night, Dr. Rock addressed behaviour that he did not believe aligned with church values.

“The primary function of this building is a church,” he said, urging tenants to clean out the sanctuary before the service the next day. “It is a church that we are allowing to be used as a shelter.”

In his office, he affirmed his commitment to providing shelter to those in need.

“The decision to allow the people to use the church as a shelter for me is putting the gospel mandate into action,” he said. “I do not want to see them gone; I just want to see them respect the space. It’s just a few who remain stubborn.”

The next day, the pastor led an unconventional Sunday morning service in which he reminded parishioners that the lessons of Irma are borrowed from scripture.

“We aren’t a people who ask God to take away the hurricane,” he said. “We ask God for the strength to face the hurricane.”

A microphone was passed so those in attendance could share their story. One woman, brought to tears, spoke about asking a man to return the goods she saw him loot from her store. Another woman talked about hiding in her closet with her children and pets before coming to the shelter.

In spite of the challenges, the shelter residents have been helping to restore the church and keep it clean. On the first day after Irma, they swept water out of the back hall, filling buckets to toss outside, and gathered broken glass into dust pans.

Anticipating the arrival of Hurricane Jose, they also cleared the front cemetery of debris that could endanger life and the structural integrity of the church if it went airborne again.

Residents also organised the store room, and men grappled with the waterlogged carpet in the aisle, tearing it up to move from the space.

Daily, volunteers carry heavy buckets of cistern water between the kitchen and the main building to use for flushing toilets and washing.

“It’s a whole family, basically: cleaning up and working together, helping one another,” Ms. Lyons said. “That’s normal.”