It was a slow day in Balsam Ghut after a morning rain — perfect nourishment for the farm located just outside the barbed wire fence surrounding Her Majesty’s Prison. “The …

END_OF_DOCUMENT_TOKEN_TO_BE_REPLACED 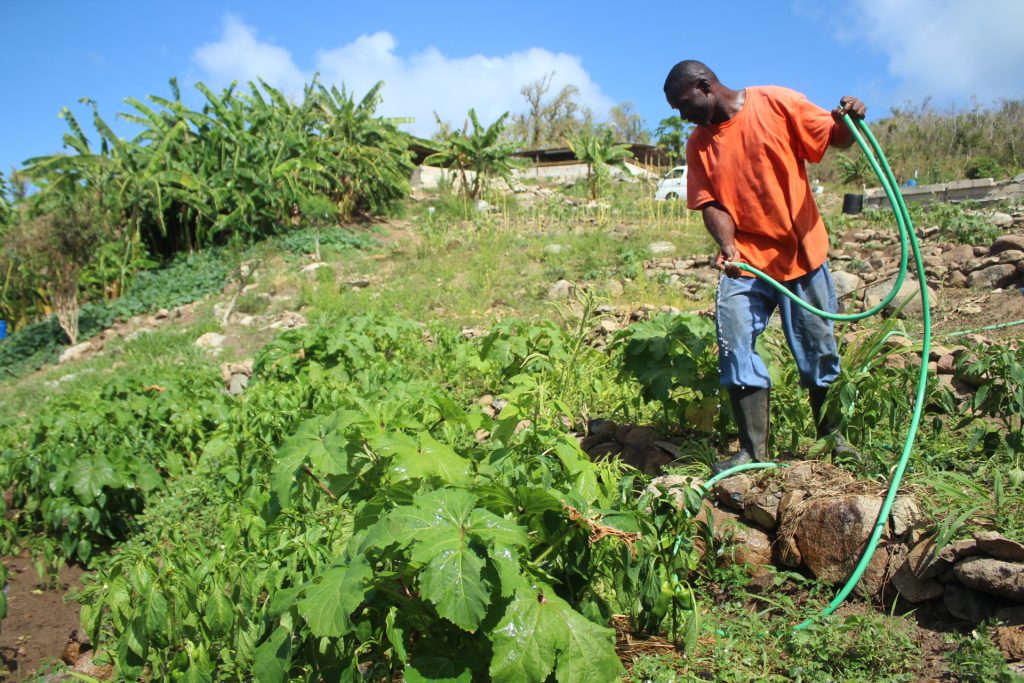 Inmate Clifton Stoutt stays late one afternoon at the farm at Her Majesty’s Prison, watering and tending to his section of the farm. (Photo: ZARRIN TASNIM AHMED)

It was a slow day in Balsam Ghut after a morning rain — perfect nourishment for the farm located just outside the barbed wire fence surrounding Her Majesty’s Prison.

“The big problem out here is the drought,” said officer Michael Patterson, who oversees the farm. “We are approaching the dry season.”

Precautions have been taken: Drums of water scattered throughout the farm supply fresh water to the plants and livestock. Mr. Patterson said that the prison recently was able to harvest 200 pounds of bok choy, 130 pounds of tomatoes, 300 pounds of chives, and 70 pounds of peanuts.

Growing in little brown mounds toward the back of the farm, only a fraction of the peanuts planted have sprouted. The same rings true for many of the other plants growing there.

Onions just began sprouting and were re-planted soon after; herbs like thyme, parsley and cilantro are in their initial stages of growth; and many parts of the farm still need to be weeded and cleared out.

When the farm is further expanded as planned, the prison’s leaders hope the harvest will be enough to supply the facility’s kitchen with produce, and, eventually, meat.

“One of the new superintendent’s priorities is to restore and revitalise the farm,” acting Deputy Superintendent Mario Christopher said of Superintendent Verne Garde. “The farm is one of the main subsidies of the prison.”

Before Irma, the prison farm raised livestock including goats, sheep, rabbits and ducks, but the main staples were chickens and pigs. When the hurricane hit, it scattered the livestock, though some pigs ended up in East End and were brought back to the farm and housed in a makeshift pen.

Now there are a dozen chickens in a coop that is about a quarter of the size of the original, a handful of goats, and 14 large pigs. Mr. Patterson hopes to grow the count to 300 pigs by the end of the year to supply food to the prison.

“We gotta make sure the jail is okay,” he said.

After that, prison employees will be able to purchase farm products at half price. The government-funded prison will sell the remainder to local markets.

Eggs and chicken from the farm were well known throughout Tortola in the past. What began in 1996, after the prison moved from its cramped quarters in Road Town to the northeast corner of Tortola, flourished quickly.

By 2002, the five-acre farm had about 600 chickens and produced 35 to 40 dozen eggs a day. Now just a dozen chickens in the coop produce three or four eggs a day.

“We are in its infancy, trying to get the farm running,” Mr. Patterson said.

With the help of 11 inmates, Mr. Patterson and his team are hopeful about the future of the farm.

Inmates involved are growing increasingly attached to the project as well.

“It’s something like caring for a child,” said inmate Clifton Stoutt, who takes care of a specific portion of the farm throughout the week.

He, like the other inmates, comes Monday through Friday from 7a.m. to 3p.m. to tend to the plants. Mr. Stoutt himself has five sons and nine grandchildren. He has served 12 years at Her Majesty’s Prison already, and he started working on the farm right after Irma.

“When I leave here, it gives me the opportunity to run my own farm,” Mr. Stoutt said.

The farm is part of the rehabilitation process for some in- mates. Since it is outside of the walls of the prison, overlooking Guana Island from the top of the hill, the prison conducts a risk assessment for interested inmates, according to Mr. Christopher.

They must meet specific criteria to be eligible to work on the farm, including having completed at least two behavioral or cognitive pro- grammes, he said. Some of these programmes, which can take up to 12 weeks, include substance abuse counselling, anger management sessions, and life skills classes.

During the intake process, the prison authorities gauge each inmate’s education, interests and psychological makeup. They then create a “sentence plan” mapping the inmate’s incarceration period.

“We try to make their time as productive as possible,” Mr. Christopher said.

Mr. Stoutt echoed his words while reflecting on his experience on the farm.

“It helps pass the time and it helps the community,” he said. “It lets people know that we aren’t wasting our time here.”

As far as farming techniques go, both Mr. Patterson and Mr. Stoutt claim that farming is in their blood.

“It’s something like when you’re born, you inherit it,” Mr. Patterson said.

Many of the inmates grew up with a garden in their yards, according to the officer.

Mr. Stoutt added, “I used to do it with my grandparents when I was young.”