After spending more than six years in court and seven figures in legal fees, Chuck Peterson said a tear came to his eye this month when he won his case …

END_OF_DOCUMENT_TOKEN_TO_BE_REPLACED 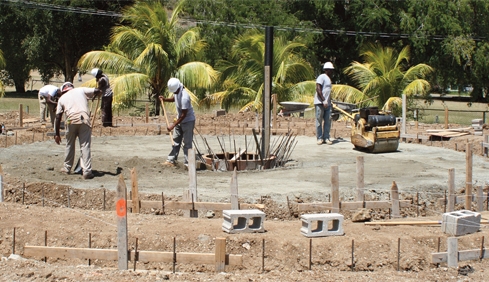 Though Global Water Associates Limited never got the chance to build its planned wastewater treatment facility at Paraquita Bay, Biwater picked up the baton and built the plant (above). Now, more than a decade since government breached its deal with Global Water, a recent ruling went in favour of the company, which claims it is owed some $30 million. (File photo: JASON SMITH)

After spending more than six years in court and seven figures in legal fees, Chuck Peterson said a tear came to his eye this month when he won his case over the government’s breach of two contracts awarded to his firm to construct and run a sewage treatment plant in Paraquita Bay.

Now all that remains is to assess damages either though a settlement or arbitration.

Virgin Islands taxpayers may cry a different kind of tears: Mr. Peterson’s company, Global Water Associates Limited, believes it is owed around $30 million, and the government may have to shell out the money at a time when public finances are stretched thin in the midst of the Covid-19 pandemic.

The decision from the territory’s highest court of appeal ends a long-running dispute that arose from the government’s breach of two no-bid contracts signed on Sept. 19, 2006 by the National Democratic Party administration in power at the time.

The first contract was a $2.68 million deal for Global Water to design, build and install a plant in Paraquita Bay capable of processing 250,000 gallons of wastewater per day. The other was a more lucrative operating agreement, which would have paid the firm $20 per thousand gallons of treated waste over a period of 12 years.

But the government never provided a prepared project site as agreed, and the Virgin Islands Party administration that took power in 2007 abandoned the Global Water plan in favour of a larger deal with the United Kingdom-based firm Biwater.

Though Global Water never built the sewage plant, it initially claimed that government’s breach of the two contracts caused the firm damages estimated at more than $22 million, according to a “case summary” drafted by company attorneys at the law firm O’Neal Webster in 2012.

However, when the dispute went to a three-person arbitration panel in 2014, the panel ruled that Global Water should be compensated only for government’s breach of the $2.68 million design-and-build contract.

It is unclear how much money would have been awarded by the arbitrators, as Global Water brought the case to the Commercial Court before they had decided the value of the firm’s claim.

In a February 2016 judgment, then-Commercial Court Justice Barry Leon ruled that the arbitration panel erred when it decided to award compensation to Global Water based only on government’s breach of the design-and-build agreement.

The panel, he stated, should also award compensation based on government’s breach of the 12-year operating agreement with the firm.

In 2017, government successfully challenged Mr. Leon’s decision in the Court of Appeal.

The appellate judges ruled that the damages Global Water was claiming from the larger contract were “too remote,” adding that the firm theoretically could have kept its operating contract even if a third party built the plant.

Global Water responded in late 2018 by filing an appeal to the Judicial Committee of the Privy Council — the court of final appeal for the United Kingdom’s overseas territories and Crown dependencies — which ruled in favour of the firm on July 13.

Among other factors, the council considered the “remoteness of damages” claimed for the operating contract, and whether or not government’s failure to provide a project site meant the company should get compensation for that agreement, according to a judgment written by Lord Patrick Hodge.

In considering the question, the council reviewed cases that the arbitrators referenced in their decision and found a strong likelihood that Global Water would have earned the operating profits if government had upheld its end of the deal.

But the probability of earnings wasn’t the only factor of importance, Lord Hodge wrote: The court also had to consider the responsibility of all parties to do the job expected of them well.

“Applying those principles to the facts of the case, it is clear that the losses resulting from an inability to earn profits under the [operating contract] were within the reasonable contemplation of the parties to the [building contract] when they made that contract,” he wrote.

Lord Hodge backed up this position by noting that both contracts were signed on the same day, and both related to the same plant on the same site. The contracts, he wrote, were linked because the company would have to finish the building in order to fulfil the operations contract.

Though the council questioned why two separate contracts had been drawn up in the first place, it decided that the separation didn’t mean government could avoid liability for breaking them both.

Ultimately, the council agreed with Mr. Leon’s ruling that there was “an error of law on the face of the award” that the arbitrators initially gave to Global Water for just the design contract.

The amount government will have to pay the firm — which is likely to include several years’ worth of interest and court costs — will now have to be assessed.

Though Global Water previously claimed government owed the company more than $22 million for breaking both the contracts, Mr. Peterson said interest has brought the sought-after damages closer to $30 million.

The original estimate appears to align loosely with the company’s projected revenue over the contracted period. The operating contract would have been worth $20 per thousand gallons of treated waste over 12 years, and the planned facility could have processed 250,000 gallons per day. If the plant ran at capacity year-round, the revenue from operations would have been almost $22 million.

The government is likely to dispute Global Water’s claimed damages, and if no settlement is reached the matter would go back to arbitration. However, that process would likely take at least a year as the parties would have to reconnect with the original arbitrators and make other preparations, Mr. Peterson said.

The previous arbitration proceedings were closed to the public.