After Hurricane Irma destroyed many of the Virgin Islands’ tourist hotspots in 2017, vendors erected bar and restaurant stands along Long Bay Beach at Beef Island to serve visitors. But …

END_OF_DOCUMENT_TOKEN_TO_BE_REPLACED 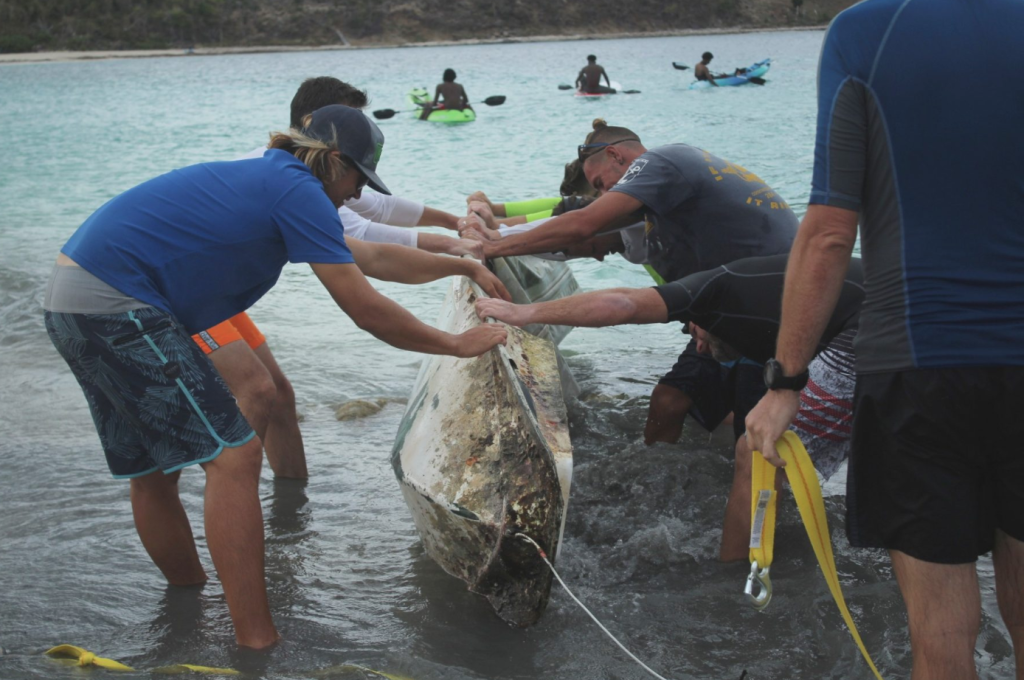 Aiming to balance the continued health of the beach at Long Bay, Beef Island with the economic opportunities for vendors who have set up shop there, the Ministry of Natural Resources, Labour and Immigration has drafted a management plan that would that would restrict motorised vehicles from the water and outlaw anchorages, among other provisions. Above, divers pull a sunken boat out of the Bay in 2019. (File Photo: ZARRIN TASNIM AHEMD)

After Hurricane Irma destroyed many of the Virgin Islands’ tourist hotspots in 2017, vendors erected bar and restaurant stands along Long Bay Beach at Beef Island to serve visitors.

But environmental hazards accompanied the development, and of the 17 threats to beaches outlined in the 2020 VI Beach Use Policy, a dozen were identified at Long Bay, environmental officer Angela Burnett-Penn said during a March 29 virtual community meeting.

“That signals to us that this is a beach that requires some urgent attention to ensure that we don’t get to a stage where we have a level of impact that is difficult to undo,” Ms. Burnett-Penn said.

To avoid such a catastrophe at Long Bay, officials at the Ministry of Natural Resources, Labour and Immigration are drafting a beach management plan that seeks to preserve the beach’s health and beauty along with the economic opportunity of vendors who have set up shop along its shore.

Two community meetings were held last week — one virtually on March 29 and one at Willard Wheatley Primary School last Thursday — to gather input from residents about the ministry’s proposed “conceptual plan” for the beach.

The Long Bay plan is central to the “comprehensive management framework” envisioned by the 2020 beach use policy.

A video played by ministry officials during the March 29 meeting explained that the proposed Long Bay plan calls for completely revitalising the beach vegetation line; restricting vehicular access to the sand dunes in front of the beach; cordoning off vendors to an area away from the beach; and preserving the bay’s water for swimmers.

To protect the dunes, the plan calls for the creation of parking areas near the main entrance and the construction of walking paths to the shoreline, using boulders to block vehicles from restricted areas.

While the centre of the beach would remain undeveloped, the proposed plan still has provisions to ensure economic opportunity for the beach’s merchants, according to the ministry video.

In addition to an area dedicated to picnics and social gatherings, a vending zone would be established within sight of the shoreline but set back from the vegetation line, and people would have to seek permission to play “amplified loud music” or hold crowded events.

Beach chairs would be strictly limited to maintain a “natural aesthetic” and minimise impact on turtle nesting, while new amenities including a hiking and birdwatching trail going around the salt pond and leading to a lookout are proposed as well, according to the ministry.

Ms. Burnett-Penn later added that the plan envisions Long Bay as a “swimming beach,” and therefore would prohibit it from being developed as an anchorage and would instead establish a dedicated watersports zone that only allows activities that “don’t require a motor,” she said.

Part of the Long Bay plan— including its directives to preserve the beach’s sand dunes — were modelled off similar laws passed in Florida that prohibit damaging sand dunes or the vegetation that grows on them, Ms. Burnett-Penn said.

Like the VI, Florida’s beaches are a big draw for the tourists who contribute heavily to the state’s revenue, and such laws have helped Florida succeed as a beach-based tourism destination.

On the flip side, residents can also look abroad for examples of what can go wrong when beaches are poorly managed, Ms. Burnett-Penn said.

Over the course of several years in the Cayman Islands, parts of Seven Mile Beach, an award-winning strip of sand home to some of the Caribbean’s swankiest hotels, have “literally disappeared” thanks largely to development that runs right to the edge of the beach instead of being buffered by a strip of vegetation, Ms. Burnett-Penn said.

Beaches on the north coast of Puerto Rico have suffered similar fates, she added.

“Again, this didn’t happen over … very long periods of time,” she said.

“We’re talking about over the span of a few years, … wide areas of beach literally disappearing.” Thriving vegetation lines are important in part because tree roots stabilise the sand, while certain species have other benefits as well.

“They literally hold the sand together, they build the beach up, and without them we really will not have a beach — at least not for very long.”

Responding to a question posted on Facebook during the March 29 meeting, Information Officer Paul Bridgewater said the plan is currently in the “conceptual stage,” but after reviewing public comments the ministry will come back with a “detailed draft plan” for which they will solicit additional feedback.

“After that, we will go back to the drawing board again and bring forward a final detailed plan,” Mr. Bridgewater said.

Ms. Burnett-Penn earlier said that the ministry hopes to finish all of the public consultations during the summer “so that we’re able to actually start implementation of this plan in the latter part of the year.”

Residents are encouraged to take a survey about Long Bay Beach and their vision for its future at https://www.survey-monkey.com/r/LongBaySurvey.

In response to a request for the draft plan, Mr. Bridgewater emailed the Beacon the video played at the March 29 meeting and said that “the beach management plan video” is available on the government’s Facebook page, apparently referring to a recording of last Thursday’s meeting at Willard Wheatley Primary School.

On Facebook and in public comments during meetings on March 29 and last Thursday, residents were generally happy that the ministry had put thought into managing the territory’s beaches, though they also questioned some of the plan’s practicalities — such a show far back the vending zone should be set at Long Bay — and debated how much consideration should be given to the beach’s economic opportunities.

While some residents thought that the plan should more heavily address the needs of Long Bay vendors, others felt that it should focus solely on preserving the beach’s natural beauty.