On the heels of celebrating the inaugural 1949 Great March and Restoration Day, community members took to the streets in protest of poor school conditions, political victimisation, and other issues …

END_OF_DOCUMENT_TOKEN_TO_BE_REPLACED 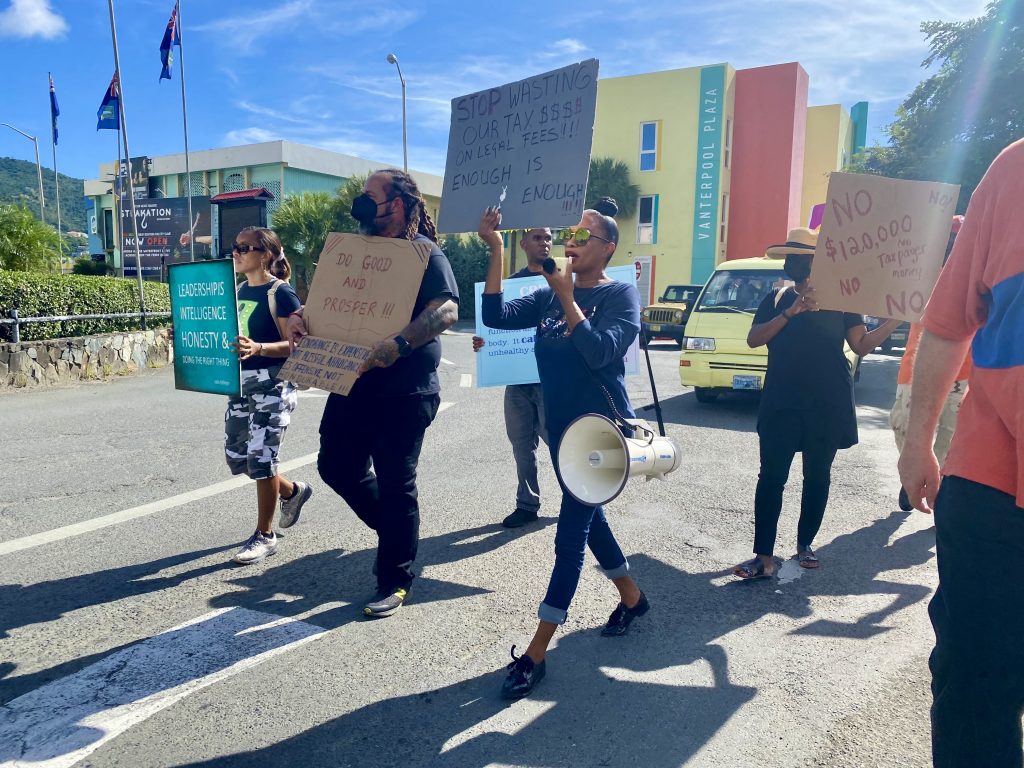 The morning after a re-enactment of the 1949 march that led to the restoration of the Legislative Council, protesters marched through Road Town to voice their concerns with the current administration. (Photo: DANA KAMPA)

On the heels of celebrating the inaugural 1949 Great March and Restoration Day, community members took to the streets in protest of poor school conditions, political victimisation, and other issues they blame on the current administration.

“We are calling on the honourable Leader of the Opposition Marlon Penn to move a motion of no confidence in the House of Assembly,” organiser Cindy Rosan said as a dozen protesters made their way from Queen Elizabeth II Park to the steps of the House of Assembly building the morning of Nov. 22. “Our forefathers have worked and invested themselves tirelessly for us to have the benefit of the BVI. Right now, everything they have worked for is at stake.”

The demonstration was a follow-up to one held Nov. 1 in front of the Save the Seed Energy Centre, when the House formed a special committee to help decide if Speaker of the House Julian Willock would be exempted from paying more than $120,000 in legal fees he incurred while seeking an injunction to stop three attorneys from participating in the ongoing Commission of Inquiry.

Commercial Court Justice Adrian Jack ruled on Sept. 28 that Mr. Willock must personally pay the fees he incurred before withdrawing his injunction request, though the speaker’s attorneys argued unsuccessfully that his actions were covered by a contract with Silk Legal to represent HOA members in the inquiry.

Protesters opposed paying the fees when government funding was lacking for other areas, particularly school infrastructure.

A Nov. 11 High Court judgment ordered that Mr. Willock must pay more than $98,000 for administrative costs and lawyers’ fees due to COI lawyers and the attorney general.

The judgement stated, “I have considered whether the total allowed below of $98,676.51 is a reasonable overall figure. In my judgment it is. This was litigation which was very significant to the first to the fourth defendants. Had the claimant obtained an injunction preventing the second, third and fourth defendants acting in the Commission of Inquiry, that would have seriously impacted on the commission’s ability to conclude its work. Mr. Willock must have been aware of this potential impact. The legal resources employed, including the instruction of leading counsel, were reasonable.”

Mr. Turnbull said the premier has failed to heed the voices of the people, which he said was evidenced by an online petition that had more than 1,200 signatures, as well as the protest that took place in front of the temporary HOA headquarters.

“You ignored the voice of the people because you felt that it was your duty to go in the House and give options,” Mr. Turnbull said. “There are people in this territory who have had enough.”

He said that consistent leadership is especially important as the territory considers pursuing greater self-determination or even independence.

He added, “You are going to be held accountable for your words and your actions. The people of the Virgin Islands have had enough, and I stand with the people where we need justice. We need a referendum. We need this government to be gone, and we need leadership that holds account … and never loses focus of what the people want.”

Ms. Rosan said she organised the protest on the anniversary of the 1949 march to make clear community members’ objections to recent decisions made in the House.

“We choose today to do that because as we think about it, and as we look at it, the decisions that are being made in the House of Assembly are challenging the infrastructure that these guys marched to set in place,” she said. “Our institutions are being pulled to the ground by this administration, and we’ve had enough.”

She said she understands why some community members may be hesitant to voice their concerns out of fear of victimisation, but she urged those who are willing to lend their support outside of social media.

Ms. Rosan expressed her frustration that the House had gone ahead with considering the motion to pay Mr. Willock’s fees rather than completely taking it off the table given the opposition shown by community members.

She thanked the people who have participated in sick-outs and protests, and said she plans to continue organising community action until the motion is disposed of.

Community member Bevin George also stood in front of the House on Nov. 22, amid the busts of Isaac Glanville Fonseca, Howard Penn, Carlton De Castro, and John Brudenell-Bruce while carrying a sign quoting Winston Churchill on the necessity of being critical in order to maintain a healthy state of affairs.

Mr. George said he lent his voice because he believes it is important to be well educated on civic issues within the territory and to take action when needed.

“I wanted to say that at least I tried to make a difference,” he said.