About two dozen protestors gathered outside the House of Assembly on Friday carrying signs reading, “Don’t be so power hungry! Face reality!” and “Premier Fahie stop hiding behind the Speaker” …

END_OF_DOCUMENT_TOKEN_TO_BE_REPLACED 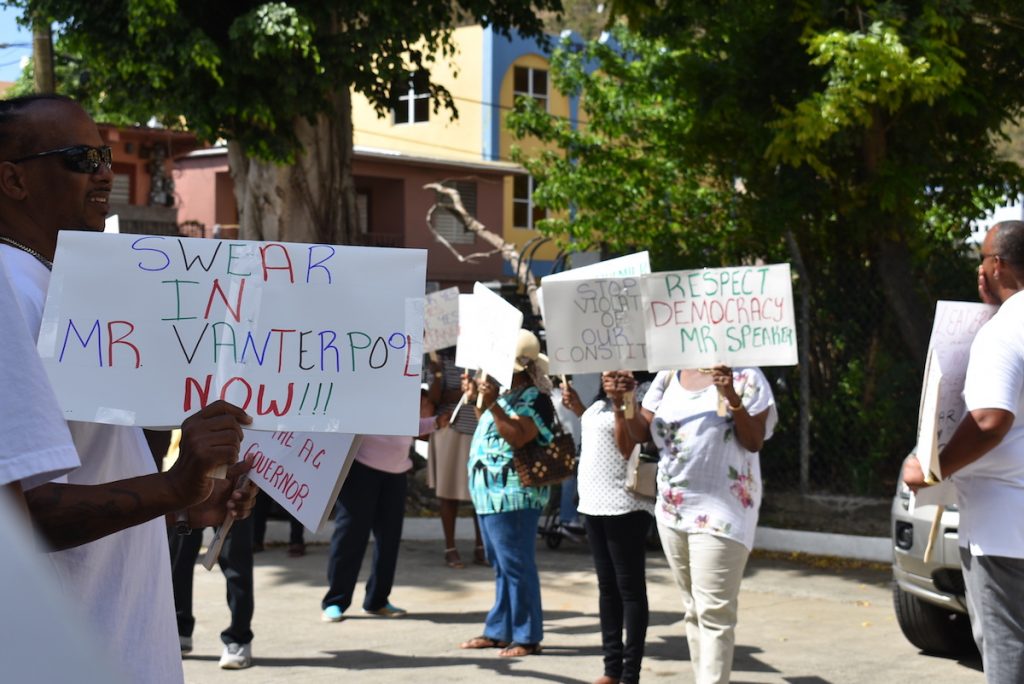 About two dozen protestors gathered outside of the House of Assembly on Friday to call on Speaker of the House Julian Willock to swear in Mark Vanterpool as Fourth District representative. (Photo: ZARRIN TASNIM AHMED)

About two dozen protestors gathered outside the House of Assembly on Friday carrying signs reading, “Don’t be so power hungry! Face reality!” and “Premier Fahie stop hiding behind the Speaker” to call on Speaker of the House Julian Willock to swear in Mark Vanterpool as Fourth District representative.

The group, said organiser Raymond Fonseca, was largely made up of Fourth District residents, but included “concerned citizens” from across the territory as well.

The district, Mr. Fonseca said, is now “unmanned,” lacking an HOA member to represent its constituents.

Mr. Fonseca said yesterday that he had gathered more than 900 signatures for a petition he plans to give to the governor by the end of the month. He added that if Mr. Willock loses his ongoing appeal to the Eastern Caribbean Supreme Court, he expects him to step down.

After approaching several government officials including Mr. Willock, Opposition Leader Marlon Penn and Third District Representative Julian Fraser, police told the protestors to leave the grounds of the HOA, and they relocated to just outside the gates.

Mr. Fonseca acknowledged that he had not sought the necessary permissions for a protest, but maintained that the gathering was a “peaceful demonstration” that was “not causing any disruption.”

Mr. Vanterpool said he was “overwhelmed emotionally” by the outpouring of support.

“As the Fourth District representative I’m disappointed that I’m still not able to represent the people inside,” he said.

“Hopefully this show of demonstration today from the people of the Fourth District and the people of the territory on the whole will encourage the premier and the speaker to do what I think is right and just in a democratic society like this.”

Mr. Willock, who has staunchly defended his refusal to swear in Mr. Vanterpool while the matter works its way through the court system, acknowledged the protestors in his announcements to the HOA.

“For me, this says that democracy in the Virgin Islands is alive and well and it is guaranteed under our Constitution, and for that I am grateful,” he said.