Puerto Rican Navy member Ricardo Montanez took part in one of the most dramatic rescues in the Virgin Islands after Hurricane Irma, and he has the video to prove it. …

END_OF_DOCUMENT_TOKEN_TO_BE_REPLACED 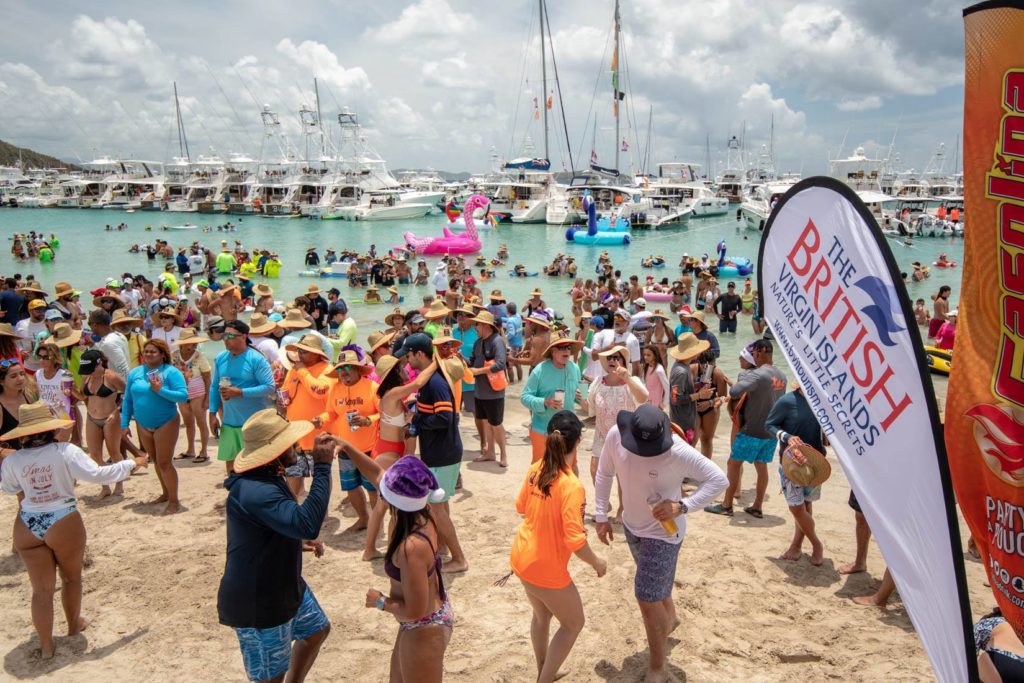 Boats crowded Savannah Bay, Virgin Gorda, on Sunday during Christmas in July, the annual celebration organised by the boaters known as the “Puerto Rican Navy.” The group received special thanks this year for its extensive assistance in the days after Hurricane Irma. (Photo: BVI TOURIST BOARD)

Puerto Rican Navy member Ricardo Montanez took part in one of the most dramatic rescues in the Virgin Islands after Hurricane Irma, and he has the video to prove it.

When Getrude Callwood-Coakley, owner of Gertrude’s Beach Bar in Jost Van Dyke’s White Bay, found herself trapped in a fallen tree, the longtime VI visitor was there to help.

After Irma, Mr. Montanez and his young daughter had loaded their boat with supplies and come to distribute them and to offer medical care with the help of a physician friend.

“I am Puerto Rican Navy,” he said of the group of Puerto Rican boaters who visit the territory each July.“I was one of the first ones here.”

In JVD, he helped load Ms. Callwood-Coakley into a Blackhawk helicopter to be evacuated to PR for medical care. The rescue was captured in a video that later went viral. They also did other work. “We came here with broken props and had to wait for new props, but then we delivered [supplies] to different marinas,” he said. “Even though I’m from Puerto Rico, I consider myself a local. I know people here.”

Mr. Montanez was not alone. All told, the Puerto Rican Navy helped fill 17 containers with food, water and supplies after Irma.

They used their own boats to deliver aid and medical care shortly before Hurricane Maria devastated their own shores.

Now they’re back for Christmas in July 2018, an annual nautical gathering that has taken on greater significance than ever before.

Other related appreciation events took place at Scrub Island, Cane Garden Bay and JVD, with hundreds of boats for the main event in Savannah Bay, Virgin Gorda on Sunday.

Tomas Dardet, the full-time Puerto Rican liaison for the BVI Tourist Board, has been working with his colleagues in PR to inform potential visitors that the VI, despite the damage, is open for business.

He was thrilled with the weekend’s turnout, which he described as much larger than expected, with Nanny Cay and other marinas booked solid.

Puerto Ricans, he said, were “everywhere” — and getting warm greetings from residents.

“That’s why this event is happening: People don’t forget and they are really ex- cited,” he explained. “I went to Willy T today and I ordered a couple of painkillers and they gave them to me for free. You know: ‘You’re from Puerto Rico? Thank you so much for all you did.’”

He added that the history of Puerto Rican visitors in the VI goes back longer than many people think.

“A main reason people buy boats in Puerto Rico is to come here,” he said, noting that the US territory is home to an archipelago known as the Spanish Virgin Islands, which he said are not as well equipped for nautical tourism as this territory.

Though the boaters have provided the VI with needed tourist business during the summer low season, some of their favourite destinations here have not yet reopened.

“They miss Bitter End Yacht Club and the life in the North Sound,” Mr. Dardet said.

But overall, he added, they are delighted with the recovery, and “finding everything they need.”

In turn, VI residents were vocal in their support.

Denia Vanterpool, a Dominican Republic-born VI resident, said she typically enjoys attending Christmas in July to experience the Latin culture and music, but she felt it was particularly important to come this year to show appreciation to the Puerto Rican visitors.

“For the Spanish people, that is our normal behaviour: We are always friendly and willing to help and give a hand to our sisters and brothers,” she said. “I know [the Puerto Ricans] always used to come here for vacation: They were always here on our shores enjoying and having fun, so I think it’s a good thing that they also come in the bad times.”

‘We have a big heart’

Mr. Dardet added that he knows Puerto Ricans perhaps haven’t always been the most popular tourist demographic in the VI.

“We like to do things the way we like to do them,” he said. “We are rowdy; we tie up all our boats together and turn on loud music. And maybe we take things for granted and we try to cross the line a little bit. But the truth is that we have a big heart.”

Francisco Rivera, who has been visiting the VI for more than a decade, was back with his family for the first time since the hurricanes.

“We were very sad seeing devastation in places we had been for many years, and they were no longer there,” he said. “But we are happy they are tak- ing movements towards renovation and improving.”

After being struck by hurricanes, he added, Puerto Rico and the VI now have a special empathy with each other.

“We know how it is and how it feels, and all that has to be done,” he said. “We really feel appreciated. We feel part of the island.”