Local News > Puerto Ricans take over for Christmas in July

Puerto Ricans take over for Christmas in July

From Nanny Cay to Virgin Gorda to Anegada to seemingly everywhere in between, this year’s “Christmas in July” was a virtual phalanx of Puerto Rican- flagged boats, with about 450 …

END_OF_DOCUMENT_TOKEN_TO_BE_REPLACED 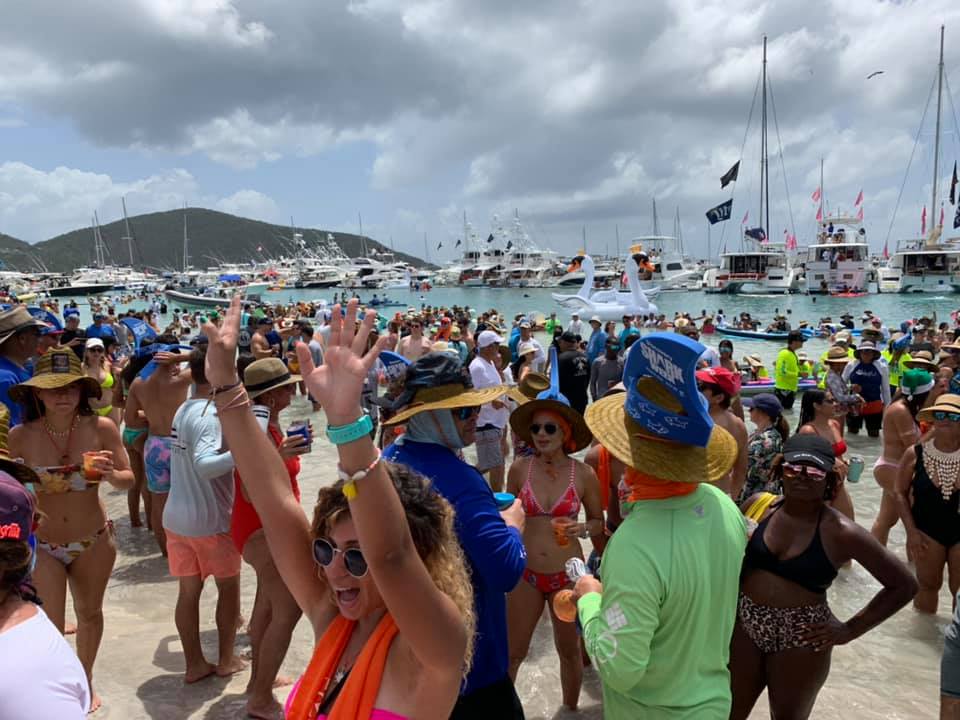 Puerto Rican visitors revel in Savannah Bay during the main event of Christmas in July on Saturday. (Photo: BVI TOURIST BOARD)

From Nanny Cay to Virgin Gorda to Anegada to seemingly everywhere in between, this year’s “Christmas in July” was a virtual phalanx of Puerto Rican- flagged boats, with about 450 attending the main event on Saturday in VG’s Pond Bay and Savannah Bay, according to BVI Tourist Board Director Sharon Flax-Brutus. Around 4,500 people attended in all.

And the Puerto Ricans who arrived — even as they faced political upheaval in their own island — were largely delighted with what they found.

Enrique Fernandez Ortiz took his boat to the Virgin Islands for his third time (and the first since 2017), five children in tow. He called the event “magic, of course.”

“The view has changed [since Hurricane Irma], but everything is great,” he said. “It’s just the energy. That’s it.”

For Mr. Ortiz, a Puerto Rico native who now lives in Florida, Christmas in July is like a family and high school reunion all rolled into one.

“We’re all together, now introducing our new generation: They’re in their mid-20s and pretty soon they’re going to be on their own, so we have to do it now,” he said. “You work so hard and you want to come down here and socialise and talk to people where you feel safe. You have this gathering of people 20 feet from the ocean and you feel safe.”

Not only did visitors praise the safety of the VI, they praised the cleanliness.

Mae Acobias was paying her first visit to the territory.

“Beautiful places and beaches; great hospitality,” she said of the VI. “Very welcoming.”

Moreover, she found that the territory’s efforts to clean up Irma debris compared favourably to the efforts of her own island, which was slammed by Hurricane Maria days later.

“Everywhere throughout Puerto Rico is not as clean as this,” she said. “Maybe the culture is different. In Puerto Rico the persons don’t appreciate their lands as they do here.”

That was pleasing to the ears of Ms. Flax-Brutus, who detailed the introduction of several new initiatives related to safety and the environment, including the installation of lifeguards at Pond Bay and efforts to “green up” the event on VG, complete with recycling bins, thorough beach cleanups after the fact, and water in biodegradable cardboard boxes.

“We have quite a number of cases [of water] donated by Oil Nut Bay,” Ms. Flax-Brutus said. “We’re just trying to let everyone see that you can have a really nice event and be environmentally conscious at the same time.”

Although Puerto Rican-flagged boats have been a frequent sight in VI waters throughout this month, official events kicked off at Nanny Cay on Friday and at White Bay, Jost Van Dyke on Sunday, with music from Puerto Rican and VI artists and deejays alike.

For the second year, free beer for Puerto Rican visitors was back at Nanny Cay in a gesture of appreciation for the much-needed containers full of supplies the self-described “Puerto Rican Navy” provided after Irma.

“I definitely think that appreciation has highlighted what happened two years ago with the storms,” Ms. Flax-Brutus said, adding, “They were the first ones to be here, and I think the BVIslanders and residents are very appreciative of that.”

In a way, she said, the event has become a victim of its own success, with nearby St. Thomas and St. John hosting spinoff events and threatening to siphon off business from this territory.

In fact, Mr. Ortiz’s itinerary this year also included the USVI, he said.

Ms. Flax-Brutus said the BVITB is planning a “Christmas in July debriefing” in order to figure out how to keep more PR visitors in the territory for years to come.

“We are very grateful to our friends in Puerto Rico,” she said. “They could choose to stay in Puerto Rico or the USVI, but they chose the BVI, and that’s important.”