Sporting colour-coordinated outfits and weaving through a room full of supporters, five candidates running with the Progressive Virgin Islands Movement were announced during the party’s official launch on Friday night. …

END_OF_DOCUMENT_TOKEN_TO_BE_REPLACED 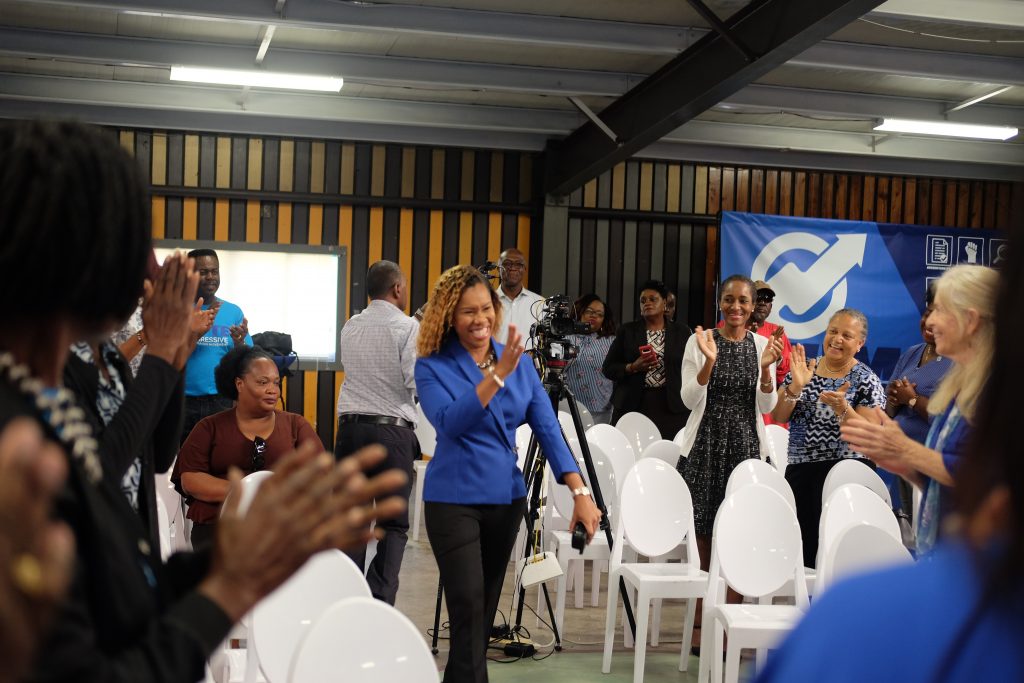 Shaina Smith, managing director of Smith & Associates, was one of the candidates introduced on Friday during the launch of the progressive Virgin Islands Movement. (Photo: AMANDA ULRICH)

Sporting colour-coordinated outfits and weaving through a room full of supporters, five candidates running with the Progressive Virgin Islands Movement were announced during the party’s official launch on Friday night.

They join party leader Ronnie Skelton, who is running at large, and Second District candidate Mitch Turnbull, both of whom recently broke away from the ruling NDP.

Mr. Skelton, who was fired last month from his position as health and social development minister, received a hero’s welcome at the event in Fish Bay.

“Our leader is not just an ordinary man. Our leader is a builder. We want to welcome our builder and the man with integrity,” announced Dr. Michael Turnbull, former NDP vice president and one of the PVIM’s founding members.

Mr. Skelton said his party does not have a full slate of candidates yet, but added that Dancia Penn, a former deputy premier and past attorney general, is also expected to join the PVIM team as another at-large candidate.

This week, however, Ms. Penn reportedly said the announcement was “premature,” adding that she has been approached by “many groups and individuals,” including the PVIM.

“I am grateful to the many persons who continue to encourage me to return to electoral politics, … I will make a further public announcement in the coming weeks,” she said in a statement.

On Friday, the candidates provided background about their careers and gave speeches about what they believe to be their political merits.

Ms. Smith, who labelled herself “a proud daughter of the soil,” stressed her love for the territory and said she will fight for women and families, among other assurances.

“I promise that when elected, I will continue to serve my country with integrity and compassion,” she said. “I will say what I mean and do what I say I will do.”

Mr. de Castro said he decided to run because of the current state of the economy, the “lack of leadership” in the Ninth District, and the PVIM’s core values.

At one point, he called out government’s former sister islands coordinator Vincent Wheatley, who is running for the Ninth District seat under the Virgin Islands Party, and Hubert O’Neal, the current district representative — but he refrained from saying their names directly.

“You would expect that they would have worked together to solve some of these problems,” he said. “But I haven’t seen it! I looked through the many pictures on Facebook: many, many pictures! And I have yet to see the two of them working together.”

Mr. Smith told the audience that seeing the aftermath of last year’s hurricanes “accelerated” his decision to enter the political arena.

“As I sat in my position as commissioner and saw the conditions of my colleagues and my staff, I was overwhelmed with a feeling of hopelessness,” he said. “As the commissioner of Customs, my hands felt tied, and it
became apparent that in order for me to be able to assist my country and its people I had to make a change.”

Mr. Scatliffe, running for the Fourth, said that all residents spend time in that district.

“This is not a job for me. This is a job for us….I want you to join this blue wave that you see coming around. I’m a surfer right now and I’m surfing on the blue wave,” he said, referencing the party’s colour.

In his remarks, Mr. Fahie said he won’t stop preaching, but rather is widening “his base.”

“As a minister of the gospel and a counsellor that deals with hands-on, day-to-day needs of the hurting, the disenfranchised, the forgotten, the walked-on, the cast-over, the poor, the needy, … I am vying for political office to assist and better serve the aforementioned with love, care and respect and tangible solutions,” he said.

Later in the launch, journalists in attendance each were given the chance to ask one question and a follow-up to it.

Several queries from journalists about Mr. Skelton’s time in the NDP were met with loud jeers from audience members.

For one, Mr. Skelton has previously said that certain elements of the internal NDP election this summer were not “transparent or accountable,” but has not provided further details or evidence in support of that allegation. During the launch event, he was again vague about that claim.

“I believe that if we have an internal election with the PVIM, we should not be out there bribing people, promising people things that we can’t deliver to get people to vote for us,” he said.

Another reporter followed up by asking Mr. Skelton if bribery has taken place within the NDP, to which the crowd erupted, and one audience member could be heard commenting, “Terrible question.”

Mr. Skelton did not definitively say whether or not he knows of bribery within his former party.

“I know it’s commonplace in the Virgin Islands that we feel we have to give people envelopes and stuff to vote for us, but I have never practised that. I don’t intend to,” he said.

Critic in the crowd

One member of the audience, Kaream Pickering, also stood up to deliver a scathing review of Mr. Skelton’s time in office.

Dr. Turnbull attempted to rein in the audience. “Let him finish, guys,” he said. “This is a democratic society.”

Mr. Skelton argued that while he voted for some projects that he thought were necessary at the time, including the now-defunct BVI Airways, he didn’t have a hand in their implementation.

“How [they] went about spending the monies — you can’t hold me responsible for that. If I was the minister of finance — [but] I was not the leader of the National Democratic Party,” he said, eliciting applause and cheers from the audience.

The PVIM later took advantage of the back-and-forth between Messrs. Skelton and Pickering on social media.

“After the questions and comments, they both met and spoke some more and then posed for a picture together,” the party wrote on its Facebook page, adding a shot of the two men, arms around each other, grinning broadly. “It was in that moment that you realise that Kareem [sic] and Ronnie are similar: brave men from different generations who intend to fight for these Virgin Islands and will do so fiercely.”