The Progressive Virgin Islands Movement continued to ramp up its campaign for the 2019 general elections with public events held across the territory over the past week. In addition to …

END_OF_DOCUMENT_TOKEN_TO_BE_REPLACED 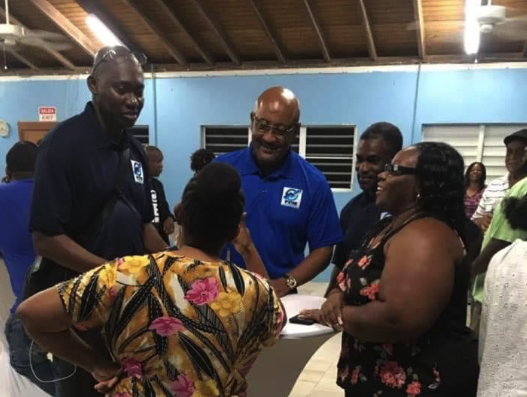 Ronnie Skelton (centre), the leader of the Progressive Virgin Islands Movement, speaks with voters during a Saturday meet-and-greet in Virgin Gorda. (Photo: PVIM/FACEBOOK)

The Progressive Virgin Islands Movement continued to ramp up its campaign for the 2019 general elections with public events held across the territory over the past week.

In addition to hosting a rally and town hall meeting in Huntums Ghut and a meet-and-greet on Virgin Gorda, the Ronnie Skelton-led party recently published its “business plan” for the Virgin Islands on its website.

And Mr. Skelton, who was fired from his position as health and social development minister last year after he announced he was forming his own party, stressed that the plan is different from a standard party manifesto.

“My PVIM colleagues have now joined me in declaring manifest NO! to traditional manifestos, as whilst they are pretty, they are hardly ever read or understood and mostly become souvenirs or keepsakes on your shelves in your homes,” he wrote in the 25-page document, which includes seven pages of candidate biographies.

In spite of Mr. Skelton’s suggestions to the contrary, the document reads like a typical party manifesto in the VI, though it is much shorter and contains fewer specifics than most manifestos released before recent elections by the National Democratic Party and the VI Party, which have dominated VI politics for the past 20 years.

Mr. Skelton added that the PVIM’s business plan serves as a report card to keep the organisation in check and includes goals both for its first year in office and for the longer term.

Those goals — which include seven pages of promised “solutions” — range greatly in specificity.

For example, the first “solution” on the list is a promise to consider increasing the payroll tax exemption from the first $10,000 earned in a year to the first $15,000, beginning Jan. 1, 2020 and lasting at least two years.

Other goals include allowing gambling aboard cruise ships docked in the territory in order to encourage them to stay the night; continuing to push government’s plan to develop Prospect Reef into a five-star resort; developing laws and policies designed to expand the sport fishing sector; completing all outstanding government financial statements and laying them before the House of Assembly; and implementing “the Environmental Protection Act” and related regulations, an apparent reference to the environmental legislation that has been delayed for more than a decade.

Other promises are less specific.

For instance, the party pledges to “create programmes to empower women and to amend laws as necessary to provide protection and equality for women,” but it doesn’t name the laws or provide details about the programmes.

The list also appears to include at least one major error: Under “improve air access,” it repeats the promise to pass an environmental law.

In spite of touting the party’s commitment to integrity, the plan stops short of promising good-governance measures that many other candidates have pledged, such as a functioning register of legislators’ interests; freedom-of-information legislation; ethics laws; campaign finance reform; and others.

As for its long-term goals — which would take place over the next 10 to 15 years — the party promises to improve “the tourism and financial services product” and to strengthen “labour laws,” among other pledges.

On Friday night during the PVIM town hall meeting, Wade Smith, the former Customs commissioner who is running for the Fifth District seat, told residents about his personal plans for the territory.

Mr. Smith said he would like to see athletic facilities improve, while making the VI home to annual National Collegiate Athletic Association basketball tournaments and track and field tournaments.

“The introduction of sports tourism goes beyond tourism itself, but it exposes our young aspiring athletes to international scouts for the possibility of acquiring athletic scholarships,” he said.

Mr. Smith asked for the crowd’s support of the party’s at-large candidates, too, saying that a vote for Wade is a vote for the PVIM.

“One man cannot make a government, and the plans that I have for District Five and the wider Virgin Islands are shared by us as a group,” he said.

Mitch Turnbull, who is running for re-election under the PVIM, also delivered his annual “state of the Second District address” on Sunday night, which he used partially to tout his own accomplishments in recent years.

“What I am confident about is that the people of the Second District — you have said to me time and time again you got my back, so I go on your behalf to represent your needs, to speak up on your concerns and to ensure that I’m doing the job you put me there to do,” he said.