The breakaway Progressive Virgin Islands Movement, led by recently ousted Health and Social Development Minister Ronnie Skelton, is officially launching tomorrow. But even before the launch, the new political party …

END_OF_DOCUMENT_TOKEN_TO_BE_REPLACED 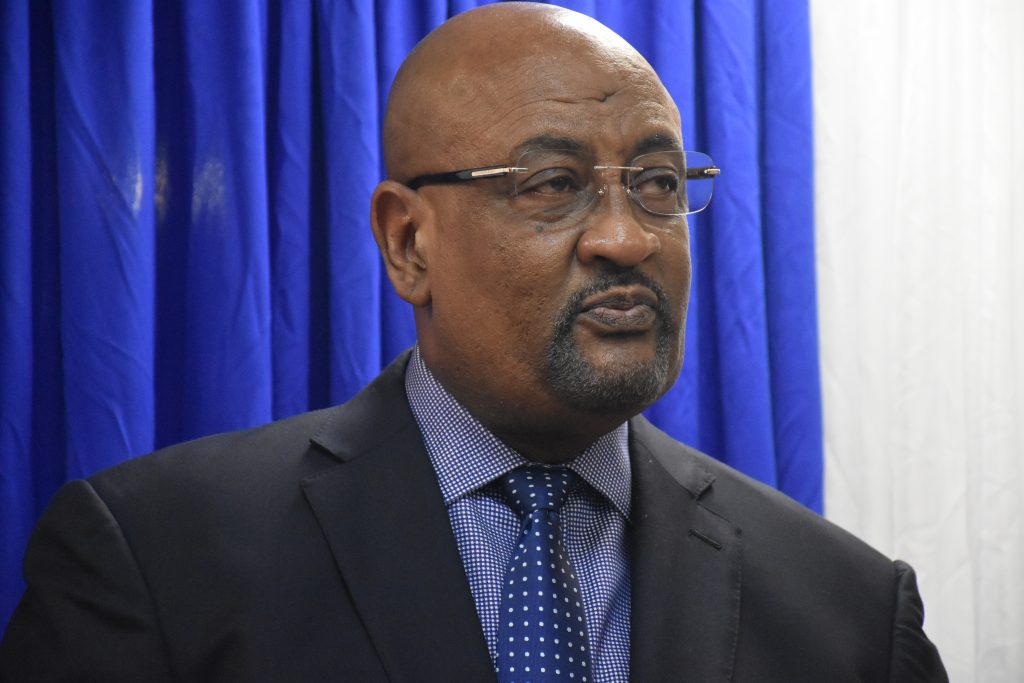 Ronnie Skelton answered questions from reporters on Wednesday about his decision to leave the NDP and start his own party. (Photo: AMANDA ULRICH)

But even before the launch, the new political party has found various ways to promote itself over the past week, including hosting a “one-on-one” media briefing with Mr. Skelton and airing a “short format reality series” on Facebook, with Mr. Skelton featured front and centre in the first episode.

Yesterday Mr. Skelton and Mitch Turnbull (R-D2), a former National Democratic Party backbencher who resigned from the party last month, answered questions from reporters while distancing themselves from the NDP and extolling the virtues of their new party.

“Today is not about apportioning blame as there is quite sufficient [blame] for all of the flag-bearers who were elected under the NDP banner in 2011 — and again in 2015 — to share. This includes me, your humble servant,” Mr. Skelton told the group.

Mr. Skelton lost a close election for the NDP chairmanship to Education and Culture Minister Myron Walwyn in June. That outcome positioned Mr. Walwyn to succeed Premier Dr. Orlando Smith if the NDP pulls a majority in the next election.

Mr. Skelton said yesterday that it took him about three months to decide to create something new.

During the media briefing, the former minister alleged that certain elements of the internal NDP election were not “transparent or accountable,” but he did not provide further details or evidence in support of the claim. Though initially Mr. Skelton wanted to “go quietly into the night” after the election, people urged him to stay involved, he said.

Reached by phone yesterday, Mr. Walwyn said he is not aware of any official complaints about the transparency of the internal election.

“As far as I’m aware the elections were free and fair. If [Mr. Skelton] is alluding that there were issues, it’s incumbent on him to say exactly what those issues are,” Mr. Walwyn said.

Mr. Turnbull, for his part, described his former party as similar to the Titanic: “heading for the big crash, but the captain never seems to listen.”

Days after confirming to the Beacon in November that he would be leading a new party, Mr. Skelton was fired from his post as health minister.

But during his tenure as minister, the department faced many challenges.

For one, the Pockwood Pond incinerator never received a pollution-control scrubber, despite oft-repeated promises from Mr. Skelton himself over several years that it would arrive shortly. And this year at least three islands in the territory have dealt with large trash fires, some of which burned for months and blew fumes as far as the US Virgin Islands.

“Anything that has happened under my watch, I take responsibility. I’m not perfect. I’m far from perfect,” Mr. Skelton said yesterday after being reminded of the lack of a scrubber and frequent garbage fires.

Mr. Skelton said the PVIM does not yet have a full slate of candidates, but Mr. Turnbull confirmed that he will again run for the Second District seat under Mr. Skelton’s party.

Meanwhile, episode one of “Inside the PVIM” was posted Sunday on the party’s Facebook page, called “The Movement VI.”

In the series, candidates will reportedly be asked various questions by Dr. Michael Turnbull, former NDP vice president and one of PVIM’s founding members, in order to welcome viewers “inside the heart and minds” of the contenders. The social media show promises that candidates never see the questions beforehand and are encouraged to be as open as they want.

“We record and present exactly what they say,” a Facebook post assures. Mr. Skelton’s latest episode includes the tagline “#askronnie.”

Mr. Skelton stressed that the PVIM wants to do “something different” rather than being thought of as a conventional political party.

“It’s important for us not to get caught up [in being] a traditional party, but to be a movement where people, as we go on, they understand that this thing is about them, and not about Ronnie Skelton or Mike Turnbull,” he said.

Mr. Walwyn, who had said little throughout weeks of high-profile NDP defections and firings, also gave his two cents about the current political climate in a statement on Monday.

“Following democratic internal elections in June, a few members resigned from our party. To say that I am disappointed in their actions is an understatement. … However, I wish all of these individuals well on their journey as we all take part in a contest of ideas to improve the lives of the people of the Virgin Islands,” he wrote.

A full slate of NDP candidates will be announced after the Christmas holidays, Mr. Walwyn said.

But in terms of the general tone of the party moving forward, it has become “very apparent” that there will be a “new” NDP, he said.

“The mantle of leadership has been passed to a new generation. More than half of our candidates are newcomers to politics, but they come with a wealth of experience in various areas,” he said.

Progressives United, a new party led by opposition member Julian Fraser (R-D3), has also not yet announced its candidates. In a statement last month, Mr. Fraser provided a few more details about the group.

“Progressives United is the result of the search for a solution to a failed leadership which resulted into an economically challenged territory and a people in despair,” he wrote.