Business > Q1 incorporations down 19% from Q4

Q1 incorporations down 19% from Q4

The Virgin Islands incorporated 7,214 new companies in the first quarter of 2019, representing an approximately 19 percent dip from the previous quarter’s total of 8,916 incorporations and turning in …

END_OF_DOCUMENT_TOKEN_TO_BE_REPLACED 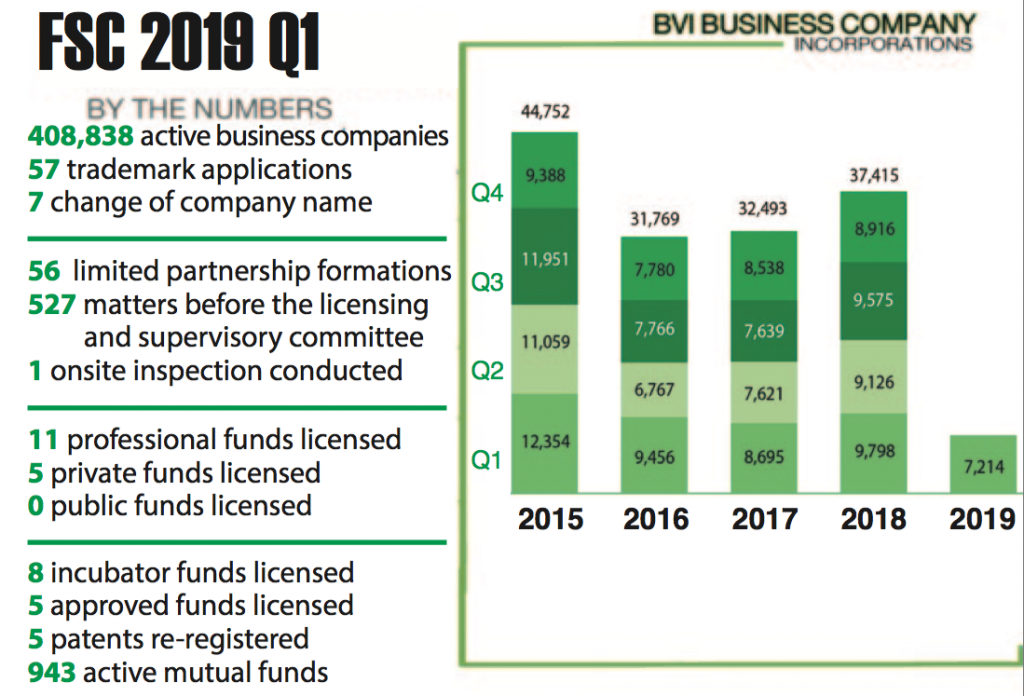 The Virgin Islands incorporated 7,214 new companies in the first quarter of 2019, representing an approximately 19 percent dip from the previous quarter’s total of 8,916 incorporations and turning in its worst Q1 performance since 2003 when the quarterly reports began, according to recently published statistics from the Financial Services Commission.

The new report proved a stark contrast from the previous one, which revealed that in 2018 the VI had its best year for incorporations since 2015. In 2018, 37,415 incorporations amounted to a 4.4 percent increase year-on-year.

However, the new numbers showed Q1 2019 incorporations also decreased by 26.4 percent when compared to Q1 of last year, which saw 9,798 incorporations.

Elise Donovan, CEO of BVI Finance, remained optimistic despite the latest incorporation numbers, which typically are seen as a bellwether for the health of the industry.

“We are confident that businesses and individuals will continue to value the strategic and administrative benefits that our global financial centre offers as the year progresses,” she said in a statement.

The territory’s financial services industry has been marked by uncertainty since Jan. 1, when new economic substance legislation took effect.

The law kept the VI off a European Union blacklist, but stakeholders warned that it could dampen business. It requires VI-incorporated companies that are tax resident here and engaged in certain activities to demonstrate “adequate substance” — a requirement that has led to much speculation as to what might count as “adequate.”

A draft code, which provides guidance on complying with the legislation, was released in April. The final version is still being reviewed and is set to be released soon, though no date has been announced.

Despite the downturn, there were encouraging signs on other fronts. After a down quarter, limited partnerships shot back up by 81 percent in Q1. There were 56 new LP formations during the quarter, compared to 31 in Q1 of 2018.

However, the number was still less than half of Q3 2018’s record high of 114.
There was also a 51 percent increase in LPs compared to the previous quarter, up from 37 in Q4 2018. At 977, the cumulative total of active LPs is now fast approaching the 1,000 mark. The territory’s Limited Partnership Act was enacted in December 2017 as a simpler and more flexible alternative to the territory’s incorporation rules.

“The Limited Partnership Act has been a great success in providing investors with a modern, flexible and innovative approach,” Ms. Donovan said. “We have seen consistent growth in this area since the act was introduced, and it is clear practitioners are being drawn to the jurisdiction by our commercial and user-friendly approach.”

The 2013 Trademark Act also continued to show strength. With 57 applications to file a trademark, there was one fewer than the previous quarter, but 10 more than the same quarter last year.