Incorporation numbers managed a slight recovery in the third quarter of 2019, with the Financial Services Commission reporting a 9.58 percent increase over Q2’s dismal performance, which saw the lowest …

END_OF_DOCUMENT_TOKEN_TO_BE_REPLACED 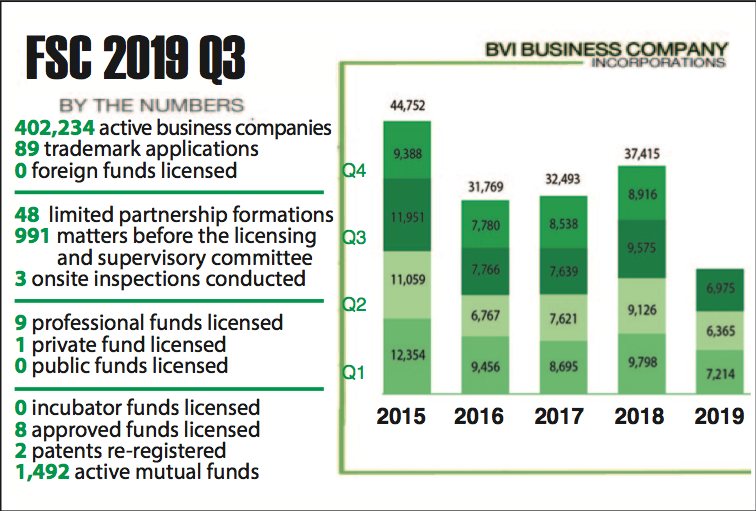 Incorporation numbers managed a slight recovery in the third quarter of 2019, with the Financial Services Commission reporting a 9.58 percent increase over Q2’s dismal performance, which saw the lowest number of new incorporations since quarterly reporting began in 2003.

The quarter’s new incorporations brought the overall number of active companies up to 402,234. The territory had shed 11,906 companies between March 31 and June 30, 2019.

Despite the new incorporations, the Q3 numbers still represented a 27.15 percent decrease from Q3 of 2018, and a continuation of the overall downward trend in the industry since the 2009 global economic crisis. Industry leaders have attributed the most recent losses largely to uncertainty
surrounding new “economic substance” regulations, which took effect Jan. 1, 2019.

The industry has been dogged by uncertainty about which companies would survive the new requirements, which call for VI-incorporated companies that are tax resident in the VI and engaged in certain activities to demonstrate “adequate substance.”

The law kept the VI off a European Union blacklist, but stakeholders believe its effect on business is still being felt.

With 2,600 fewer incorporations than Q3 of 2018, the latest numbers also suggest that 2019 has little hope of matching that year, which offered a glimmer of hope when 37,415 new incorporations amounted to a 4.4 percent increase year-on-year.

Limited partnership registrations, after dipping last quarter, shot up to 48, for a 29.73 percent increase. However, this was 66 fewer LP formations than Q3 of 2018, for a decrease of 57.89 percent. This brings the cumulative number of LPs to 927 — 94 more than last quarter.

The Limited Partnership Act was enacted in December 2017 as a simpler and more flexible alternative to the territory’s incorporation rules, and BVI Finance CEO Elise Donovan has praised the sector’s “consistent growth.”

According to the report, the most popular class of trademark this quarter was Class 35 — which includes advertising, business management or office functions — followed closely by Class 36: insurance, financial and real estate affairs.