There are now 11 active cases of Covid-19 in the territory, nine of which are tourists and two of which are returning residents, according to Health and Social Development Minister …

END_OF_DOCUMENT_TOKEN_TO_BE_REPLACED 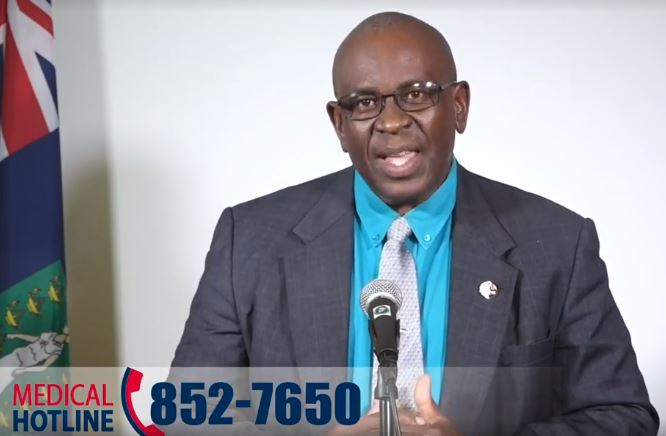 Health and Social Development Minister Carvin Malone updated the territory regarding the number of active Covid-19 cases in the territory as well as an increase in various fines for breaching quarantine protocols. (Photo: SCREENSHOT)

There are now 11 active cases of Covid-19 in the territory, nine of which are tourists and two of which are returning residents, according to Health and Social Development Minister Carvin Malone.

In a press release on Saturday, Mr. Malone stated that the cases were discovered on days zero and four of quarantine after the travellers entered the territory.

“All persons were deemed asymptomatic and are safe and secured in quarantine until they have completed the re-tested protocol yielding negative results to be considered recovered,” Mr. Malone said.

Additionally, fines under the Covid-19 Control and Suppression (Entry of Persons) Regulations, 2020 have increased.

On Thursday, Mr. Malone made another announcement stating that the fine for anyone landing or embarking illegally in the territory is now up to $100,000 and ten years imprisonment, up from $1,000 and twelve months imprisonment.

Those who assist or shelter anyone landing or embarking illegally will also face a fine up to $100,000 and ten years imprisonment, up from $3,000 and two years of imprisonment.

Mr. Malone also said that hotels, resorts and charter companies with Gold Seal transportation services under the direct authority of the Taxi and Livery Commission can be used to transport guests.

Residents and belongers can now apply for a waiver of the pre-arrival Covid test, but if their waiver is approved they will be subject to a quarantine period of seven to 14 days with a PCR test at the end of the quarantine period.

“A negative test result must be attained before release,” Mr. Malone said.

“The public is reminded to continue to comply with all health and safety measures that include hand washing, wearing of face masks in public spaces, maintaining six feet from others outside of your households, disinfecting frequently touched surfaces, avoid touching your face and limiting large gatherings, especially during the upcoming holiday season,” Mr. Malone said.