As the flow of visitors into the Virgin Islands continues to grow, Premier Andrew Fahie announced on Tuesday that fully vaccinated people will now be able to enter the territory …

END_OF_DOCUMENT_TOKEN_TO_BE_REPLACED 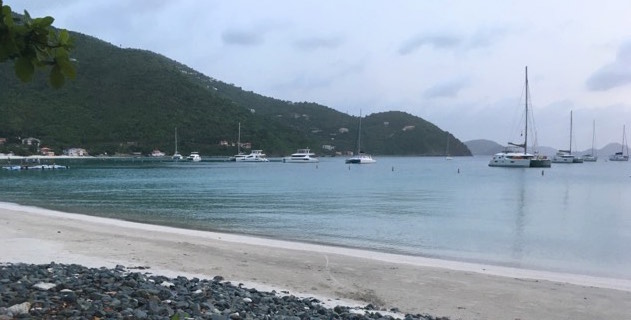 Boats bob in the water of Cane Garden Bay on Tuesday evening. With the recent announcement that fully vaccinated visitors will not be required to quarantine, Premier Andrew Fahie is predicting that increasing numbers of tourists will soon come. (Photo: JOEY WALDINGER)

As the flow of visitors into the Virgin Islands continues to grow, Premier Andrew Fahie announced on Tuesday that fully vaccinated people will now be able to enter the territory without going into quarantine or being tested upon arrival.

The softer rules are aimed at reviving the tourism economy, which stalled out during the pandemic but has been coming slowly back to life since the borders reopened in December.

“These new measures put the BVI in a very competitive position among the tourism destinations in the region,” Mr. Fahie said during a Tuesday speech broadcast on Facebook.

Starting Tuesday, unless they are ordered to do so by a quarantine officer during their entry screening, fully vaccinated travellers will not be required to quarantine upon arriving in the VI, Mr. Fahie said.

They will not be required to take Covid tests upon arrival either, but instead must do so within five days of landing in the territory, according to the premier.

Though Mr. Fahie said fully vaccinated residents and tourists will need to take a PCR or “approved rapid antigen test,” he did not specify which antigen tests government has approved, and neither he nor Health and Social Development Minister Carvin Malone responded to requests for comment.

As a further enticement for the fully vaccinated, government also reduced the BVI Gateway Portal fees to $35, according to the premier.

“These new measures will further allow for the expansion of our tourism reopening, and by extension our economy,” Mr. Fahie said.

Although fully vaccinated travellers will enjoy greater freedom once landing in the VI, they are still required to submit information to the BVI Gateway Portal, including negative results of a PCR or rapid antigen test taken at least three to five days before they arrive in the VI; proof of travel insurance; their vaccination certificate; and a “travel authorisation certificate” issued by the Public Health Unit, according to the most recent Covid-19 Control and Suppression Regulations Gazetted on Monday.

Any vaccinated person who travels to Puerto Rico, St. Maarten or the United States VI for less than 24 hours and has been in the territory for at least 14 straight days will be exempted from being tested when they return, but is also required to obtain a Travel Authorisation Certificate through the BVI Gateway Portal, according to the regulations.

The premier did not say if there were any new testing or quarantine rules for non-vaccinated travellers, but the most recent regulations state that if they test negative upon arrival they will have to quarantine for seven days, and they will be tested again at the end of their quarantine period.

Any partially or non-vaccinated person who tests positive upon arrival will be relegated to a 14-day quarantine and will not be released until they test negative.

Partially vaccinated entrants, meanwhile, will still be required to undergo a four-day quarantine upon arrival, in addition to taking tests upon arrival and again within five days of their arrival, Mr. Fahie said on Tuesday.

While government is working to make a getaway to the VI more attractive to fully vaccinated people, officials are looking to make the territory more accessible to them as well.

However, the Road Town ferry terminal and Terrance B. Lettsome International Airport will be the only two ports of entry to also receive partially and non-vaccinated passengers, he added.

“Domestic travellers will remain unaffected in their ability to use all ports,” the premier said.

He added that Cabinet has also decided to “establish Anegada seaport as an official port of entry, to receive fully vaccinated travellers and crewmembers only for this initiative. The public will receive updates as we continue to move forward with this initiative.”

The premier also warned that people caught illegally taking advantage of the perks for vaccinated travellers will face steep penalties.

“A fixed penalty of [$10,000] on summary conviction would be introduced for producing false documentation such as vaccine records or Covid-19 test certificates,” Mr. Fahie said.

As government continues to further reopen the borders, some charter companies and hotel operators have reported a rise in visitors over the last few months, Mr. Fahie said.

With the lifting of quarantine and arrival testing for the fully vaccinated, he is confident this trend will continue, he said.

Ferry companies are calling for increased passenger capacity on trips between the USVI and this territory, the premier said, adding that a hotel he did not identify reported 60 percent occupancy in April.

In total, the VI has received more than 20,500 entrants since the borders reopened in December, Mr. Fahie said.

Of this total, about 5,000 people have landed at the Road Town ferry terminal since it reopened on April 15, Mr. Fahie said.

Over the first eight days of June, 1,225 people arrived at the airport, he added.

As lockdowns in other countries come to an end and testing and quarantine rules and fees are dropped here, Mr. Fahie expects that the climbing number of visitors will grow even higher.

In the first eight days of June alone, the territory welcomed 1,600 arrivals at the Road Town ferry terminal, more than half of the 2,500 passengers who arrived at the jetty throughout all of May, Mr. Fahie said.

Similarly, a total of 3,012 people landed at the airport last month, while the airport saw an average of 2,400 visitors every month from December until the beginning of May, Mr. Fahie said.

During his address last Thursday, Mr. Malone also gave an update on the territory’s effort to partially vaccinate at least 17,000 people by July 3.

With only 12,245 people receiving one dose and 7,289 receiving both, Mr. Malone urged residents to take advantage of the free jabs offered across the territory, as the vaccine supply is set to expire at the end of July.

“I was hoping by now that our first dose numbers would be significantly higher, at least in the 15,000 persons range,” Mr. Malone said.“There is still some ways to go, but the reality is time is not on our side!”

Although most of his symptoms passed, he was left with partial deafness “and aloud breathing noise” in his left ear that he believes are never going away, he said during a Facebook broadcast last Thursday on the government’s Facebook page.

According to a Tuesday Covid-19 Dashboard Update, there were two cases of Covid-19 in the territory, both of which are asymptomatic and located on Tortola.